Pueblo Bonito shows that much thought and planning went into the design and building of the massive south facing complex.

The largest structure within Chaco Canyon, Pueblo Bonito, is situated on an east-west axis with the long, straight wall facing the south.

The photo was taken from the top of a rock cliff to the north of Pueblo Bonito. While it gives a good overview of the entire structure, it is truly impressive to view the towering structure from the ground.

Chaco Canyon encompases a cluster of housing complexes and illustrates that Pre-Columbian cultures displayed high levels of sophisticated within their social-political organization.

Not only were items from oceanic cultures based thousands of miles away found as evidence of large scale trade, but their housing structures were built toward a southern orientation.

The remnants of large, wide, straight roads can be seen from the top of the cliffs.

The structures that remain still stand strong and proud with their exquisite masonry workmanship.

At one point, the walls of the structure reached 4 stories high and held hundreds of rooms. 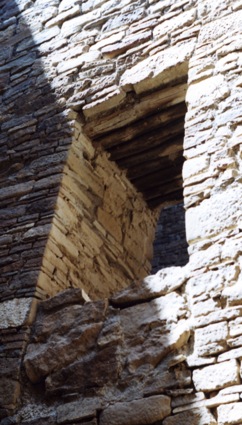 A window in the walls shows the density within them

The thick masonry walls have a large capacity for keeping a temperature stable within its thermal mass. For example, if the structure is warmed with the sun in the winter, the sun warmed rock walls will retain the heat energy in its mass, then slowly release the heat through the night.

Similarly, in the summer, when the rock mass cools in the cooler temperature of the desert night, if the rock is kept shaded during the day, the density of the rock helps to keep the inside temperature cool, while hot summer sun heats the exterior of the dwelling.

Passive solar design has been used for hundreds of years.

The cliff dwellings of Mesa Verde also how ancient Americans used the southern facing cliffs to build large complexes.  The overhanging cliff blocked the summer sun, while it allowed the winter sun to warm the entire structure.

Chaco Canyon is located in New Mexico and can be visited by veering off the beaten tourist path, driving over the dirt roads into the high desert country.

When driving to Chaco Canyon make sure to check the weather report as the dirt road can become impassable after a rainstorm.

From the south, two routes access Chaco from Highway 9, which runs between Crownpoint, Pueblo Pintado, and Cuba. Both routes can vary from very rough to impassable. Not recommended for RVs. If you are traveling from the south,  call ahead for the latest conditions.