When I first began thinking about different projects that I could possibly do on the property to have a warm passive solar space to retreat to, my creativity was spurred and a vast canvas of possibilities opened up. 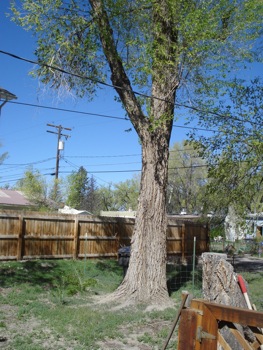 Site of the tree house. Picture taken in the morning. You can see from the shadows that the tree faces south.

I’ve gone from sketching passive solar tree houses, sheds and two story pop-up additions to the current house.  This was back in the day when the reality of cost had not yet entered the picture.  None of the options/ideas shown here will be pursued.  I think.

A passive solar tree house would simply be divine, up in the company of the birds and sky.  I was thinking that a platform with about 8 different stabilization posts grounded in cement would be the main system of support for the structure, while the main stump could also be used as a stabilizer – sort of.

I thought this was a kind of cool idea to get around the need to get a building permit.  As voiced my ideas to others, many different builders have given their perception of the the permitting process within city limits.  It was a little confusing. Some said that if a concrete slab was poured, a permit would be needed, others said that if posts were used then I’d need a permit.  Someone else said that it needed to be under a certain size, then a permit wouldn’t be needed…  Since then, I’ve talked to the City Building People and have learned what the codes and permits allow.  If you want to build something, you should do the same.

Here are sketches of ideas for that lovely tree you see to the upper right. 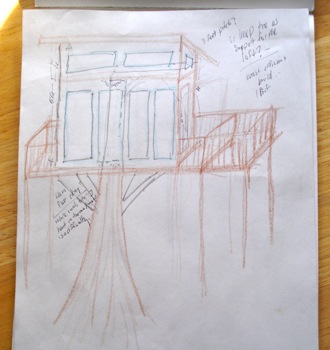 One idea for a passive solar tree house 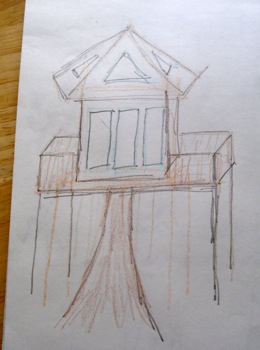 Another idea for a passive solar tree house 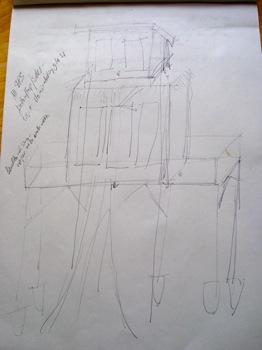 A third idea for a passive solar tree house

After doing some research, I think that the passive solar tree house idea is being abandoned because it is more difficult (but not impossible) to add thermal mass into a tree house for it to be warm in the winter and ideally cool in the summer. While a beautiful idea, and while I’d really like a tree house, I’m going for warm and functional in the winter.