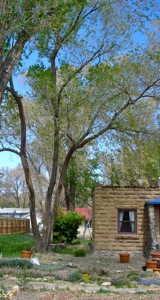 These trees need to be cut down

I have a hand saw. My rational was that if the gorgeous, large and truly amazing Sistine Chapel could be built before electricity and gasoline powered chain saws (not to mention that the whole ceiling was painted by one Michelangelo) then surely I could cut down a few trees with my hand saw.

Retrofit projects are unique. They must take into account the existing building and features on the property. Rather than starting with a clean slate, one needs to work with and modify what is on the property.

In looking at the existing building’s mass in the sandstone blocks, I’m thinking that it would be ideal to make create a space that could both heat the house in the winter and provide usable space. If the projected sun room were to extend around the house to the south and to the west, in order to create 10 feet of usable space, trees need to be taken down.  Thus, the hand saw emerged from the shed.

I propped a ladder next to the ill-fated tree, calculated where I wanted it to fall, created a cut in that direction, then started sawing through the diameter from the opposite direction. I soon realized that I was precariously high off of the ground and could potentially fall, so I got down, found and put on a rock climbing harness and roped myself back into the tree. After sawing some more, I realized that the ladder was not stable, so I got back down to grab my cell phone. Climbing back into the tree and sawing once again, as the tree got closer to falling, loud cracks were heard as the final strands of the tree broke under the strain of its hobbled weight. In a swift downward thwack! the tree was pulled by the bulk of its enormity and fell to the ground. I soon realized that this was serious business. There is a house next to mine and I really do not want trees to smack into someone else’s house. 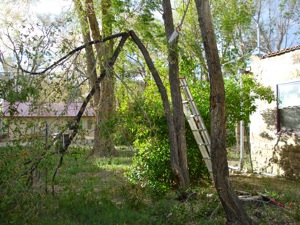 After cutting down another small tree and realizing that trees are ridiculously water heavy, dense, fall quickly, and can do major damage, I called in the professionals. The professionals are quite expensive, but they do seem to know what they are doing. We negotiated so that they would cut down the trees to get them on the ground, then I would deal with them (see below). This was more inexpensive and sounded like a fabulous idea. Since there are many trees on the property, and the trees guys were only dealing with three of them, I set off to the local hardware store to see what type of tree cutting implements I could rent.

I was steered toward a ‘chain saw on a stick’. (Amazing what is out there!) On the end of an extended pole of about 10 feet, is an attached chain saw. I was told stories of cutting down tree limbs from the top of vehicles, and thought, “Sure. I can do that.”

I went back the next day to rent it, but wanted to see if I could start and carry the thing. While I could start it on my own (with prepping and coaxing) the ‘chain saw on a stick’ was amazingly heavy and could not fit in the car. Then I heard the horrible stories of the chain saw getting pinched in the tree and bucking out of the man’s hands, and so, instead, decided to go with renting the smaller and more manageable ‘saw on a stick’.

The professional men with studded tree climbing boots and large, loud chain saws came to cut down the trees.

(Do not fret. They are the ‘Chinese Elm’ trees that grow quickly, then rot and fall on cars, houses and electrical wires. They have been making prodigious amounts of light colored round, flat seeds that have been flying around in the wind making it seem like an odd, hot summer blizzard. Since these trees are spending their energy making loads and loads of seeds, they have just started to leaf out, so the birds have not yet started nesting in them. Sorry! I’m not sure what else they are called.) 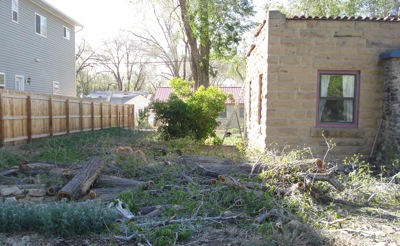 Oh no. What have I done?

The tree men did their work and soon tree carcasses lay strewn about the yard. As I started dragging the limbs, piece by piece, with some dismay, I realized that I was embarking on a rather large project.  And the actual building had not yet begun.

Thankfully, a neighbor and her teenage son helped to clear out the smaller tree limbs. This took 5 truck load (was it 6?) trips to the City Green Refuse Drop-Off a few blocks away. Today another friend is arriving with a chainsaw to help to cut the large truck pieces into smaller more manageable pieces so that they can be moved away. 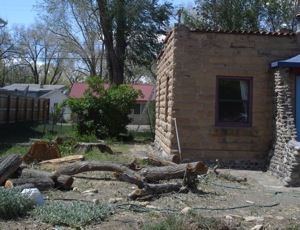 Everything looks smaller in the pictures.

The 811 utilities locate number was called, so I’m finding out where utilities are buried. I figure I’d do this before thoroughly planning out the whole design.

As I write this, there’s still a lot of work to be done on the trees. The tree stumps must also be removed.

Not sure how to do this yet. Perhaps I can learn to drive some sort of earth-digging truck thing.