Ideas and Background on the Proposed Retrofit

The present sandstone block house is built of thermal mass, is facing the south-east and has the potential to be an efficient passive solar house.

Through the progression of winter and spring, I have thought about different possibilities that would create a warm space on the property. 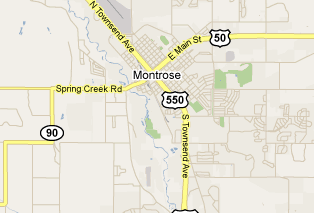 The city has its main streets constructed at a 45 degree angle from the principle directions. Most of the roads leading into the city run parallel to the main directions, then shift as they enter Montrose.  Being located in the old part of town, the front of the house faces a south-easterly direction. 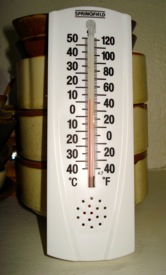 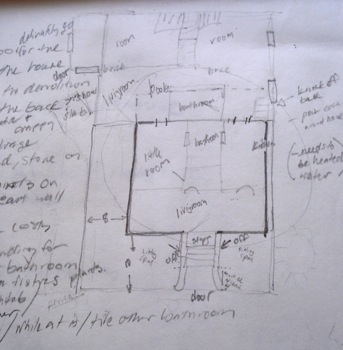 Before I started any serious research, I came up with these grand plans.

The current structure is the darker square near the middle of the drawing. The dashed line in the back of the house is the outline of a small addition that would be knocked off.

An enclosed porch to the front would capture the sun’s energy, while the side to the west would be extended and an addition with two bedrooms, a living room and a bathroom would be added to the back.

These initial plans would have increased the house size by three times.

It is fun to dream isn’t it? 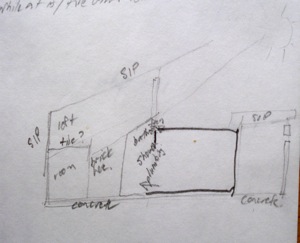 Here is a side view of the grand plan for the house that shows how the back addition would have clerestory windows that rise above the roof line of the structure in front to let heat energy – sunlight in to heat the back of the house.

Once again, it is fun to dream, no?  The reality of paying for that grand of a project is, however, rather a prohibitive force.

I need to go and talk to the city to find out more about building codes, permits, fees and other official things to do when building.