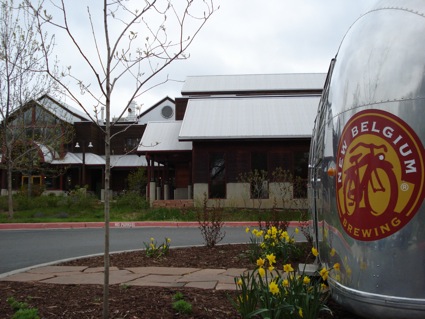 The front of New Belgium Brewing

The New Belgium Brewing Company headquartered in Fort Collins, Colorado, has been leading the microbrew business with a blend of playful inspiration and focused, driven business acumen.

While New Belgium is a relatively young beer brewing company, it is leading the way in the integration of sustainable and renewable energies while quietly churning out profit.

In the process, they also craft a wide variety of diverse and very tasty brews.

Passion, along with a hip coolness – percolated with creativity, seem to permeate throughout the company.

It leads one to ask: Why in the world would anyone make anything without passion? It seems to be the vital ingredient that infuses delicious zest and zing to processes. 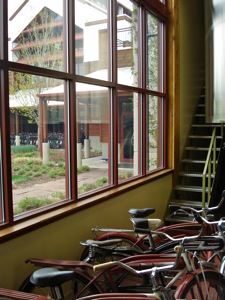 Bicycles are seen throughout the premises

The story of New Belgium Brewery begins with its founder, Jeff Lebesch, riding his fat-tired bicycle through Belgium’s countryside with a copy of Michael Jackson’s “Great Beer Guide” tucked into his bicycle panniers in the attempt to learn how to make truly great beer.

While the American graduated with a degree in electrical engineering, he followed his aspirations to make great beer and thus built the foundations for the company’s success.

In a nutshell, a rapid chronology of New Belgium Brewing:

2010 – New Belgium Brewing Company has 362 worker-employees and has grown to be the third largest domestic micro brewery company in the United States (following quickly, rather, skipping, onto the coattails of brew giants Samuel Adams and Sierra Nevada). 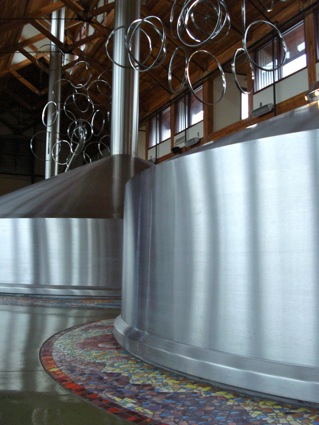 This rapid growth alone makes New Belgium Brewing impressive, but what makes it really impressive is its blend of conscientious, humanistic passion, and its use of sustainable energies.  This is mixed in with its drive and creativity to create delicious products, combined with practical profitability.

While we live in times where business corporations can be seen as commonly making unsavory business choices based upon the desire for the most rapid  profit without regard to, and often at the expense of their workers and the environment that surrounds them (think BP).

Within a business culture of seemingly unbridled greed, it is important to note that many other business corporations are making choices based on sustainability and a respect for the environment – and they maintain profitability too. 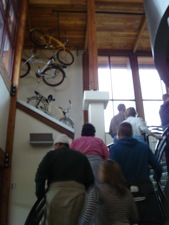 Public tours of the New Belgium Brewing company take place throughout the week and can be reserved online.

The tour gives a unique and personal glimpse into the culture of New Belgium Brewing.

Upon entering the brew pub, the visitor is enchanted with the theme of bicycles.

A surprisingly large amount of bicycles and bicycle parts grace the company grounds both as art deco while it also serves as a very practical aspect of the company.

The chairs in the bar seating area incorporate 5 bicycle rims as the base of the chair. Similar rims surround the women’s bathroom mirror. Rims also hang from the ceiling over the stainless steel brew vats.  Bicycles hang from the walls.  Around the corner, a shrine, with – guess – bicycles.

New Belgium Brewing is now a worker-owned company and upon completion of one year of service, the newly christened worker is awarded a bicycle along with the offering of stock options. 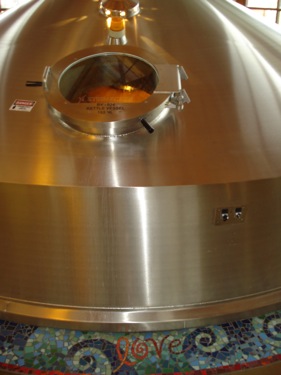 Isn’t it nice when ‘love’ is integrated into its making?

A walk up the stairs takes one to see the large stainless steel vats where the beer is brewed.

On the floor that surrounds the vats, decorative tiles circling them give the brew special characteristics of the desired outcome, while honoring the talents and energy that go into the brew.

On our tour, there was a woman who originally was from Belgium (but was visiting Colorado from one of the New England states). As we tried a sour beer, she explained that this type of beer was a traditional Belgian beer that would be lovingly prepared with a mashed cherry and spoonful of sugar stirred into the beer.

She went onto explain that the Belgians take their beer drinking very seriously and have special glasses for certain types of beer. As a young girl, she began to wash the glasses and just before adding dish soap, was abruptly stopped (just in time!) because the soap changes (or rather – ruins) the flavor that is supposed to be retained within the glass, specific to this type of beer. 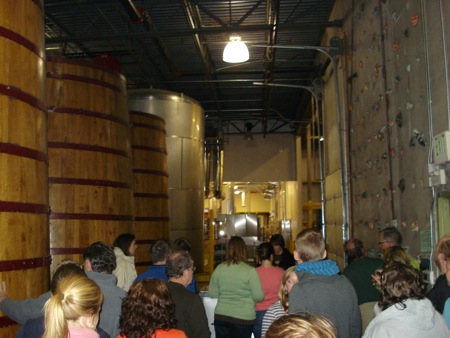 A climbing wall is directly opposite of large wooden vats

A passion for the processes, combined with a playful and creative nature for making beer is evident throughout the tour.

Large wooden barrels fermenting beer are directly opposite of a climbing wall.

In the picture, the tour entourage is lining up for yet another delicious sample of brew, one of many along the tour. 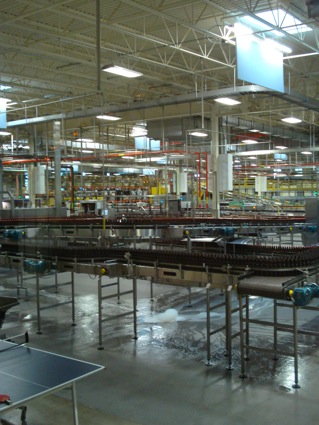 A ping pong table in the corner of the factory floor

We progressed to the beer bottle processing factory. Going up the stairs to view the factory floor, one passes a pinball machine and beer bottle chandelier.

While their new building is not officially LEED certified, it likely would have gotten certification had they started LEED integration early and paid the fees associated with obtaining LEED certification.

Some of the sustainable features within the building are the beetle kill wood used in the base boards, the marble scraps used for the window sills and the use of solar tubes throughout the building. (Ah ha! The passive solar aspect!) The solar tubes and other methods of natural lighting have been installed throughout the factory and allow light to comes in through the roof, helping to cut down on daytime electricity use.

In the corner of the bottling factory, a ping pong table can be seen.

The process of brewing beer has been made as resourcefully efficient as possible.

(I think this extra care taken affects the qualities and taste of the brews. It also makes drinking them even more enjoyable.) As the process of making large amounts of beer can likewise use large amounts of energy, New Belgium Brewery recycles energy whenever possible. For example, steam created in one process is used to heat water in the next. 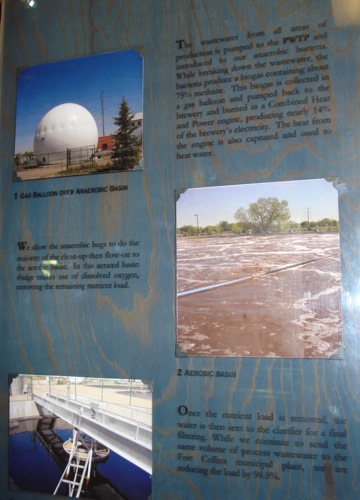 After the brewing process is complete, the brew waste water is treated with different types bacteria that help break down the waste, and in the process, turn it into methane.

The methane is trapped in a large, white domed, balloon-like structure and harnessed through an electrical generator, so that up to 15% of its power can come from its own waste water.

The remaining liquid goes through New Belgium’s own water treatment facility and becomes 98.5% clean before it enters into the city water system.

The company also purchases the electricity from windmills and just installed 300 solar panels.

Is the New Belgian Brewing Company a successful and sustainable models for other businesses to follow? Yes.  Absolutely. 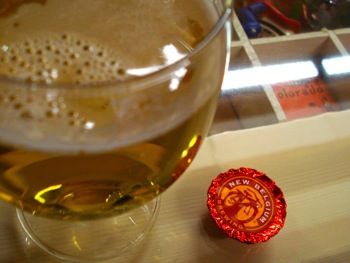 The tour ended with yet another sample of brews, this time accompanied with chocolate.

New Belgian Brewing is located in Fort Collins, Colorado. Tours can be arranged online by going to the following links.

New Belgium Brewing’s mantra  – “Follow your folly!” shows that passion and profitability can be combined for the benefit of many people.