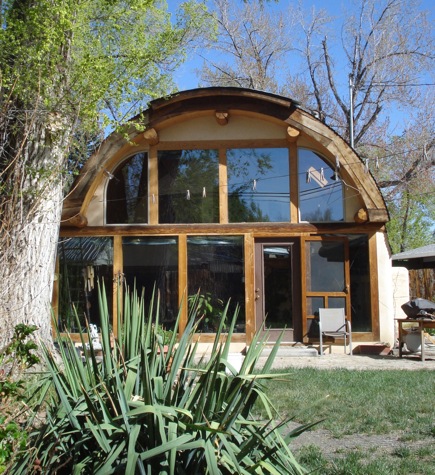 The southern facing side of the building opens to the backyard

With planning and creativity, almost any structure can be retrofitted with passive solar design elements.

This home underwent a passive solar retrofitting process to become the efficient, sunlit structure that it is today. Originally placed on the property in 1948, it was a drafty 1-story Quonset hut that was likely purchased from the army shortly after World War 2.

In the retrofit, the house was lifted, angled and thermal mass, mainly with the addition of adobe, was added throughout the new base of the structure.

The hard work has paid off in the form of a lovely, efficient passive solar house. On a good sunny day in the winter the owner says, “It doesn’t matter how cold it is outside, the natural gas forced air heater does not start until during the night.” He keeps his thermostat at 72 degrees.

This passive solar retrofit highlights the use of adobe within a traditional stick frame build. Salvaged and recycled materials were used whenever possible. 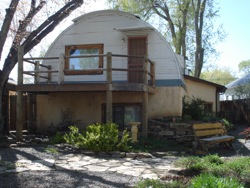 The front of the property that faces the street has been xeriscaped. Facing the north, it also shows the shading on the property.

The original Quonset hut was both raised on jacks and turned, in order to angle the building’s glazing (glass) toward a more southern facing direction. The house is located in a city that is oriented 45 degrees diagonal to the regular directions.

The builder, in angling and turning the whole house, moved the solar glazing as much as possible toward true south, while adhering to the city code setback of 5 feet from the edge of the property. It is currently 15 degrees east of true south. 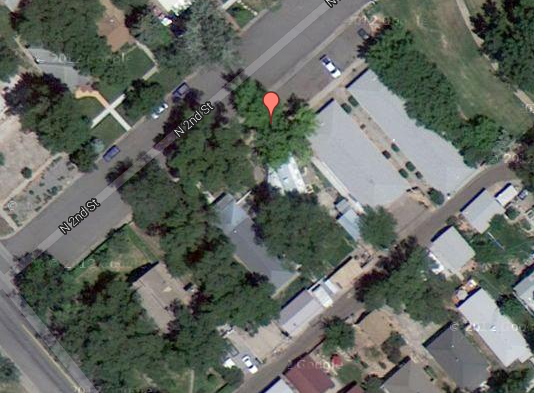 Here’s a bird’s eye view of the house. See how it’s angled a bit differently from the other houses? 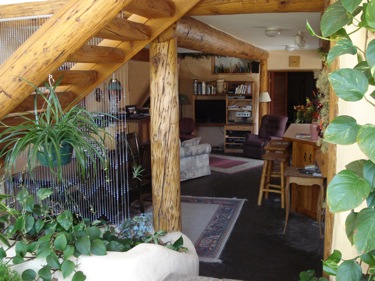 The view from the south looking into the house. The kitchen is to the right hand side, and the back wall is made of adobe bricks.

The inside of the house is comfortable with graceful and custom features. The owner/builder took care to find and use materials that could be salvaged.

All the logs seen throughout the photos have been recycled, salvaged from their former life as telephone poles.

This view shows the view into house from the greenhouse. There are steps from the greenhouse that descend to the main living area. The house was designed so that on the winter solstice, the sun’s heat energy is able to strike and be absorbed into the back adobe brick wall. 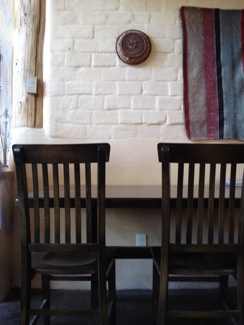 The adobe bricks were simply painted over and are a nice patterned surface in the home.

Adobe has been used extensively throughout the house. Adobe is a sustainable,  green building material, since all it consists of is hardened mud (dirt + water).

The house has a one foot thick adobe brick wall perimiter that surround the building on the ground floor.

The house has also been sunk three feet into the ground. This helps the building maintain a stable temperature.

The ground floor is poured adobe mud, sealed with boiled linseed oil. The adobe floor took about 6 coats of linseed oil, as it was applied until the adobe would not absorb any more.

All the bricks used in the wall for the ground floor, over 1500 of them, were made during one weekend with the use of a rented brick compressing machine.

Steve described this adobe brick-making-machine as a type of hydraulic ram that squashes damp dirt together to make uniform size bricks. The benefits to this process were that the dirt from the property was used (creating the space to sink the building 3 feet) the adobe bricks were quickly made, and were uniform 12” by 4” size bricks. The bricks were stacked on palates for later use.

By that time that the walls were built, the bricks had dried, so to give them some moisture they were plunked into water, then the brick was simply pushed into place. An adobe mortar was used in between the brick layers while an adobe plaster covers the inside of the walls.

Adobe bricks seen from inside the house 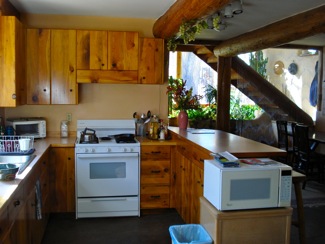 The kitchen cabinets are made from recycled barn wood

The wood shows character from its former life as it weathered the elements outside. Some of the barn wood was difficult to work with because the pieces were irregular and warped, while others were burnt, and of varying thickness.

The patterns and character within the old wood, however, are original and add an aesthetic dimension that can not be rivaled when compared with plastic wooden laminate products. 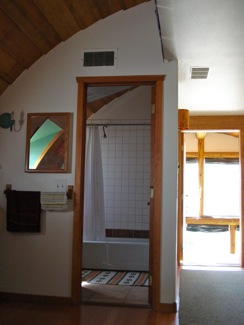 A view from the upper story of the Quonset hut showing the curved top with recycled cedar planks, looking toward the greenhouse.

Throughout the upper story of the house, gleaming cedar planks, grace the curving walls of the Quonset hut.

They were formerly the exterior siding of a house, salvaged before the house was destined for demolition.

While it is really rewarding to use and know that materials were salvaged and recycled, he adds a few words of caution, saying that the process of building with salvaged materials can add another layer of difficulty to the building process.

For example, instead of going to the hardware store and purchasing what is needed to immediately install, the wood needed to be first taken off of the house, hauled, then straightened, sanded and finished before installation. 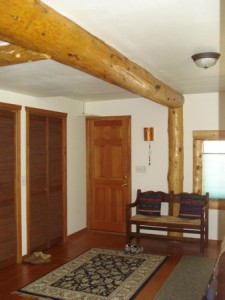 Here’s how the Quonset hut looks in the opposite direction, 2nd floor

Here is a view of the upstairs section looking in the opposite direction, turning away from the southern facing glass and into the back bedroom. The drywall ceiling was dropped and is likely using the logs as part of its support.

It’s also important to keep in mind that this passive solar house works (it stays warm in the winter and cool in the summer) both because of its thermal mass and because spray-in foam insulation was attached to the inside of the metallic quonset hut dome helping to insulate the structure. 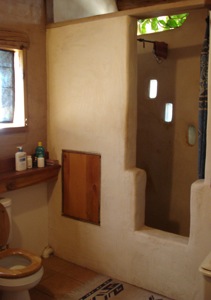 Earthship-style construction with cans and cement were stuccoed in to form the walls of the shower.

The bathroom on the lower level shows the rounded edges of the shower’s wall. They were made with earthship-style construction. Underneath the adobe stucco layer are aluminum cans set in cement. The concrete adds thermal mass, while the aluminum cans create space, while recycling a product.

The translucent glass bricks that let light into the shower from the greenhouse are actually empty gin bottles. Steve jokes that it took him a long time to build the retrofit because he was working on getting all the materials in order to finish the house. Since the floor plan is open, with the bathroom being situated next to the greenhouse, there isn’t a fan in the bathroom, it simply vents out into the greenhouse. 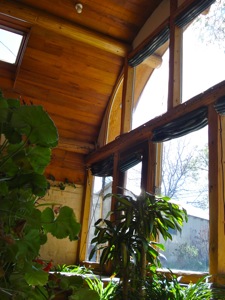 All of the logs were former telephone poles, while the cedar planks were salvaged from the siding of a house

The southern facing side of the structure houses a greenhouse with various types of plants both in planters and in the ground.

(Disclosure: In the past I’ve eaten a papaya in December or January from this greenhouse. I think the papaya plant has since been removed, but that experience has been part of my formative ideas on why I too would like a passive solar house.) 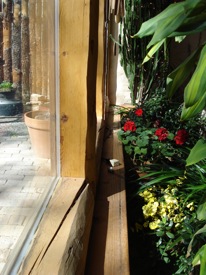 The double paned glass (double glazing) that is used on the southern side of the house is a High-E type of glass. A higher E value (denoting emissivity) is a type of designation that indicates that the glass is more resistant to loosing heat from the inside to the outside. Insulated curtains are also used to help keep the heat inside the house after the sun goes down.

D logs were used to stabilize and place the glass. D logs are often used for building log cabins because they have a flat surface on three sides of the log, with an aesthetic outer-facing side that is curved. The D logs performed as nice, even surfaces to place the glass upon. The windows are held in place on the outside with a strip of cedar. 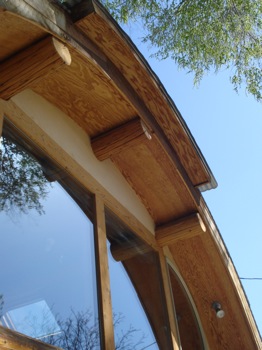 The overhang on the roof blocks the summer sun, while a tree on the southern side also helps to shade the building

The overhang was calculated so that it would block the summer sun, but allow the winter sun to strike the one internal adobe wall located near the back of the house.

In order to insulate outside of the thermal mass (the adobe bricks) the owner added a one inch thick layer of Styrofoam, then protected it with an outdoor stucco, durable for 30 years. The dwelling is a traditional post and beam structure, with all the adobe being non load bearing.

The owner-builder works a day job and worked on the house whenever he could. At one point, he stopped for a year.

He is proud that no trees were downed in the process of building the house.  The home is extraordinarily beautiful.