While I feel an odd sense of accomplishment, I realize that the feeling is premature and that there is a long (hopefully mildly enjoyable) road ahead in actually building the passive solar addition to the current structure. Step one, however, was getting the variance application in on today’s deadline, May 17, 2010, so that it would put the project in front of the Planning Commission for a hearing on June 23, 2010.  They will either reject or approve the application for a variance. The fate of the project is in their hands.

A variance is needed when building occurs within a setback.  Within the county that I live in, the code stipulates that the building of permanent structures must be 5 feet from the property line.  The 5 feet buffer around the property line is called the setback.  I think codes are dandy, but I would also like to insulate the house.  I needed to apply for a variance before any sort of building on the main house could begin, because one of the sandstone block walls needs to be insulated, and it happens to be within two feet of the property line, thus located within the 5 feet setback. 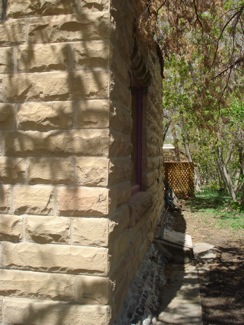 Here is a picture of the offending wall; the shaded, north-east facing sandstone block wall.  While rustic and cool looking, it doesn’t have any insulation and the property line is around where the flagstone – cement path ends.  In order to insulate and thus extend the building in the easement, I needed to submit a written application explaining that I wasn’t adversely affecting the public health, safety and welfare, didn’t create the situation to apply for the variance in the first place, and explained that the variance allowance would provide relief from the bitter winter cold.  In order to place insulation outside of the thermal mass, the insulation would extend the property into the setback.

I also needed to supply a visual plan and in the process of creating one, have measured all aspects of the house and property.  I even dug into the dirt to find the survey stakes.  (Of course I left there where they were.  I wanted to find them to check to see that my drafted plans were correct.) While I was in getting copies made (3 large copies needed to be submitted with the variance application), two other guys came in to make copies of their drafts.  I thought I was the only one who taped pieces of drafting paper together, but they did too!

Alas, it would be really nice to have a warmer house in the winter. It’s been an interesting process and I’ve already learned many fascinating things. I learned that the county counts the square footage on the outer part of the building. (Take note! To those building with straw bale or recycled tires!) 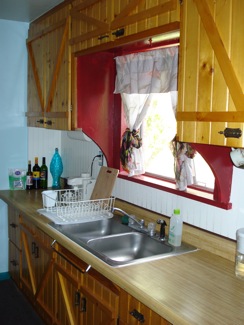 When I started measuring the inside of the house, I was shocked that the livable space of the house was a mere 638 feet! When I purchased the property, it was advertised as -1000 square feet. After I measured the outside of it, I found that it was about approximately 730 square feet. The city assessor office stated it to be 748, which is correct with all the figures rounded up. With the porch added on, the residence comes to 768 square feet. However, in looking at the square footage disclosure when I purchased the house, the realtor stated that it has a square footage of 792. Not quite sure how they got that figure. Oh realtors…

I also submitted 3 pages of photos that include the north east-wall and the room directly adjacent to it, the kitchen. Really, the only thing that is insulating the kitchen (picture to the right) or rather, acting as a buffer from the outside cold, are the kitchen cabinets.  I neglected to include the information that my pipes froze once this past winter, while I was sleeping in the house. (It’s sort of embarrassing!) But I do hope that the variance passes.

In the meantime I’ll continue onto the next steps of design, find an engineer, learn sketchup, pairing it with google earth just to make sure that my sun calculations are correct, find a builder, extract trees, work, etc.