Difference Between An Owner-Builder and Hiring a General Contractor

When I first started thinking that I would (simply build onto a structure) start a retrofit building process, I knew that I first needed to see if it was possible to do this (legally) through the city and started the process of getting a variance. Once I figured out the lot size, position of the house on the lot, and general goal for the variance, the application was turned in. 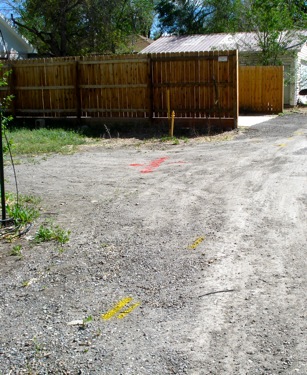 After calling 811, various utilities came out and spray painted the location of where utility lines are buried.

In order to start the design of the retrofit, I called the 811 (Call before digging) utility notification number to find out the location of where various utility lines may be buried. I found out that only natural gas lines, oddly, two of them, are buried in the ground, while all the other utilities are strung-in via poles.

Then all of a sudden the overall goal seemed very far away as the design and planning process quickly became more complex. A window was once thought of simply as a window, however, I’ve now learned that they can come in various sizes, tints, with different coatings, double or triple panes, and in a variety of different possibilities for framing… these different factors will affect how much solar heat energy will be allowed into the house, as well as how much heat can potentially escape back out of the window. Then, of course, there are different options for insulating them. But there are other materials besides the windows!

Various different building materials and their positive and negative aspects, while figuring in cost, attributes, time, labor, design, integration of different objects and their relationship to one another, have now presented themselves as factors. I’m learning about them and enjoy asking questions, so will also try to create articles.

Since I had been doing articles on mainly on passive solar building projects, the majority of those researched and featured thus far, have been built by owner-builders. I simply assumed that I would research the various building processes and call the shots. However, I’ve come to find that there is a role such as the general contractor. I found out that in most building processes, a general contractor deals with the city permits, plans, then subcontracts various roles out to electricians, plumbers, concrete people, etc. and magically, structures get built.

The beauty of hiring a general contractor is that he (or she) will do all of the nitty-gritty for you. If you have funds to be able to hire a general contractor, then in essence, he becomes your personal builder-diplomat. This can be a beautiful thing, but can generally be more expensive, unless very little planning is done and huge blunders are consequently made. (I hear this can and does happen  in building projects.)

The general contractor sometimes bids different projects by doing the research of permits, material and labor costs then submits a proposal of what could be done, along with a price. I’ve heard this referred to as a hard bid – with all costs locked in. In this case the general contractor wants to cover his costs and get paid, thus as materials fluctuate this can be good or bad for either side, however, a contract is made up and it is generally adhered to.

I’ve also learned that many aspects of building can be negotiable. Instead of working under a hard bid, a builder can also work under a cost-per-hour agreement. This is what I think I’ll be going for, however, I really don’t want the process to go on for years and years.  The whole process, however, is just starting and I’d really like to try to avoid huge blunders.  I suppose I am falling under the category of owner-builder, (although I am lacking in the builder part) and thus will be acting in an quirky general contractor role by pulling the permits, finding the subcontractors, an engineer, materials … My enthusiasm for the building project has been tempered by the reality of the seemingly massive amount of price tags and costs for various materials… but wait, passive solar will hopefully be more cost effective in the long run. And so, the process continues…