The E-Cube from Ghent University

Ghent University, Belgium will be creating a modular-kit based solar house called the E-Cube for the the 2011 Solar Decathlon.

Because it is modular, it can be quickly constructed, yet can be personalized with various add-ons or other choices. The E-Cube can be combined with options that include a photovoltaic (PV) system, additions to create larger living spaces or include different interior or exterior finishing choices. 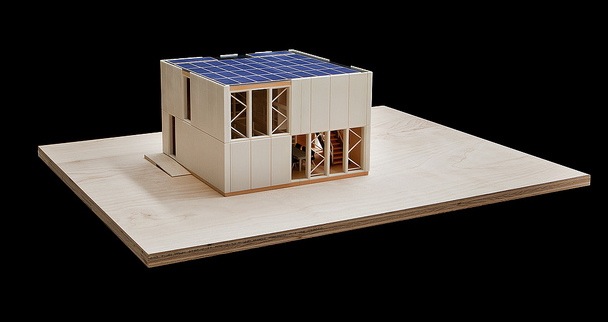 The team from Belgium state that the E-Cube will be “an affordable, do-it-yourself building kit for a solar-powered house that is pre-engineered, factory built and easily assembled without any special skills.”

Modulars are becoming more popular and sought out for their ease of installation. It is a nice feature to be able to purchase a building that is pre-engineered. While modulars were once shunned by the building industry and planning departments, more cities and municipalities are allowing this type of building to be built within their respective jurisdictions.

All the Solar Decathlon teams are working hard to finish the building of their competition homes.  Here’s a picture of the E-Cube on July 1, 2011, a mere two and a half months before this year’s Solar Decathlon.  The home will be disassembled and placed in the shipping containers for the journey across the Atlantic Ocean to compete in Washington D.C. 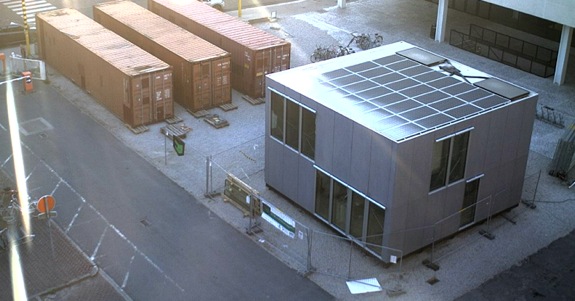 Construction on the E-Cube on July 1, 2011. From their website

The roof on the E-Cube is filled with two types of solar panels.  It is likely that one type is a photovoltaic (PV) panel to generate electricity, while the other ones are likely for solar hot water.

There appears to be two levels of living space with an open configuration.

It does not appear to have the retractable roof that I was so looking forward to seeing in action.

Large windows allow sunlight into the kitchen as well as the rest of the house.

If the windows of the building are oriented toward the south (in the northern hemisphere) the building would be passive solar, and thus more efficient, depending on the materials used to construct the building. 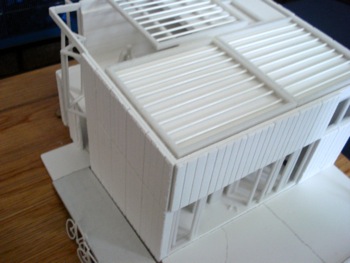 On the early model, there was a retractable roof, along with an opening on the window wall on the second level.

The retractable roof would be an interesting and nice feature to have in a house.

The space would perhaps function similarly to how a deck would be used, but be located inside.

I was really interested to see the retractable roof in action and had a lot of questions as to its performance.  Would its operation be electric or manual? How will it be sealed?  Will it be sealed well enough to be constructed in a rainy or snowy climate?  It appears to have a flat roof.  How much of a snow load would it be able to carry?  Ahh, my questions go on and on, but it looks like the team may have researched and done trial with the roof to find that the space would be better used if filled with PV. 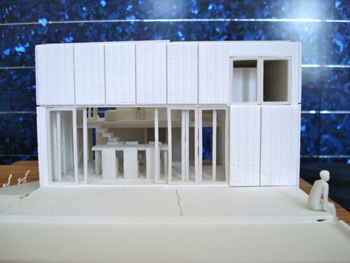 The model submitted for acceptance into the 2011 Solar Decathlon. Picture taken in April 2010.

On the model, steps can be seen, located behind the kitchen, that lead to a room on another level.

This is an interesting, creative, and attractive competition entrant. I’m looking forward to seeing the retractable roof in action in D.C.

The Solar Decathlon challenges university teams from around the world to create efficient, useful, attractive, zero-energy, solar powered homes. The 20 teams in the competition have created models and will construct their houses on the National Mall in the fall of 2011. The models were on display at NREL (National Renewable Energy Lab) in Golden, Colorado, this past April 2010. Here’s one of the 20 teams picked for the competition.