The Solar Roof Pod from City College of New York

What follows is a conceptual model of a competition house entered in the 2011 Solar Decathlon. The Solar Decathlon challenges university teams from around the world to create efficient, useful, attractive, zero-energy, solar powered homes. The 20 teams in the competition have created models and will construct their houses on the National Mall in the fall of 2011. The models were on display at NREL (National Renewable Energy Lab) in Golden, Colorado, this past April 2010. Here’s one of the 20 teams picked for competition with pictures and initial observations.

The City College of New York has a 2011 Solar Decathlon competition entry of a modular Solar Roof Pod. 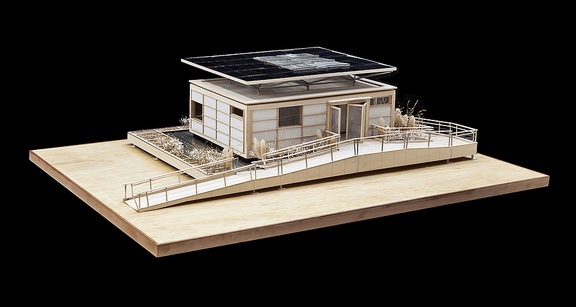 The beauty of having a competition with entrants from around the world is that a great diversity of urban and rural solutions from a myriad of different environments will be presented.

Being based in the urban environment of New York City where space is a premium, the currently under-utilized rooftop space can become prime real estate with the Solar Roof Pod. 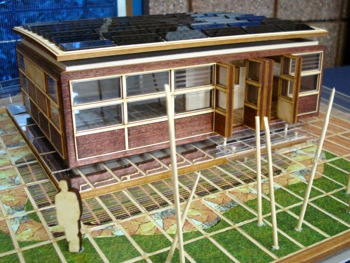 Because it is a modular building, the Solar Roof Pod will have the ability to be broken down into a system of smaller sections that can be transported to rooftops by the use of a staircase or elevator.

This is a highly desirable trait for the urban dweller or builder. Imagine gathering 5 good friends and transporting the entire structure up to the rooftop in a weekend.

Thankfully (and to keep those good friends) the City College team plans to use light weight materials in the modular construction.

The Roof Pod has a rectangular floor plan with approximately 1000 square feet.

The conceptual model of the Roof Pod appears to show it facing a southern direction. This would allow the sun to hit the solar panels and allow the passive solar building to receive the maximum amount of solar gain. This would be seemingly advantageous in the winter, but without an overhang or some type of shading system, the summer sun’s heat energy would put quite a lot of strain on the cooling system during the hottest months of summer.


Photovoltaic panels will provide electricity, while solar thermal panels will be used both for hot water and to power the air conditioning system. (That part I’m very curious about.)

There also appears to be some sort of glass-house that extends from a section located on the opposite side of the window wall. Would this be a type of greenhouse on the northern side of the house?

We will have to wait and see how the team constructs the Solar Pod during the 2011 Solar Decathlon.