What follows is a conceptual model of a competition house entered in the 2011 Solar Decathlon. The Solar Decathlon challenges university teams from around the world to create efficient, useful, attractive, zero-energy, solar powered homes. The 20 teams in the competition have created models and will construct their houses on the National Mall in the fall of 2011. The models were on display at NREL (National Renewable Energy Lab) in Golden, Colorado, this past April 2010. Here’s one of the 20 teams picked for competition with pictures and initial observations.

The INTRO House from Ohio State University is one that will be pleasing to see in action during a rain fall. ***Since this review was written, a newer, different model was submitted by this team. The newer model and video can be seen below. 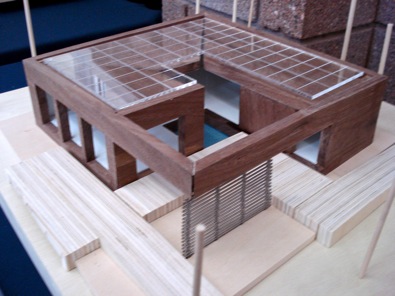 The roof has a central role in this 2011 Solar Decathlon house.

The initial model had a square outer perimeter with an inner inverted J-shaped living area.

The INTRO house is topped with an inward sloping roof that channels rainwater into a courtyard located in the middle of the J shape. The rainwater can potentially be purified and used for household use.

The roof also has an attachment called a “weathering steel grate” that functions as a type of rain screen, presumably to keep leaves and critters out of the water to be collected in the middle of the house.  They say that this grate will also provide summer shade.

This is an interesting concept because the Ohio team also plan to have a combination of a PV array as well as solar thermal panels also on the roof.   They say that it would provide shade for the courtyard area, but a dark courtyard area does not seem to be an attractive area to open to the rest of the house.

Buildings and plans typically change during the process of working out various challenges.  Here is the picture of the model in January 2011.

The building has gone through some dramatic changes with the courtyard being enclosed and a better visual of the sloping roof. The planners state that there will be a water system that collects and purifies household gray water for use in the garden. The combination of solar panels and a water shedding and filtration system will be an interesting one to see in action.

There are some passive solar aspects to this house. (I’m liking this!)

The south side will have two layers of windows separated by one foot, with inner double glazing. (It is not specified if the other layer will have single or double glazing.) They plan to shade the southern facing windows in the summer with metal screens that will block the sun.

In order to regulate its inner temperature, it appears that the Ohio State University team plans to integrate a geothermal thermal heat pump to heat and cool the house.

The INTRO House can potentially provide a zen-like atmosphere functioning as a Zero – Energy home, or it could be potentially disastrous.  I like to lean toward the positive, but with many different systems running concurrently, the complexity of the systems increase, along with the potential for systemic glitches.  (But that’s also the fun of it, right?)  We have the technology to do what is proposed, but can they pull it off?  It will be interesting to see the outcome.

Another question that immediately comes to mind is whether or not this is an economically feasibly house.  For the size of the seemingly compact house, is there enough of an economic benefit to be gained from trenching a geothermal heat pump and loop system?  While it would be interesting to see a cost analysis that takes into account the different aspects of initial costs, perhaps energy costs will rise to such an extent that it will be economically feasible.

This is another interesting 2011 Solar Decathlon entrant. We’ll have to see if their systems will truly shine when it comes time for the INTRO House to be showcased next year.