UPDATE: See the PerFORM[D]ance house at the 2011 Solar Decathlon.  The team came up with an innovative way to incorporate shading and hurricane protection.  The initial review of the model follows below.

Florida International University based in Miami, Florida, has designed a square solar house for the 2011 Solar Decathlon that can potentially dance as the house moves to moderate its energy input/output and heating/cooling needs. 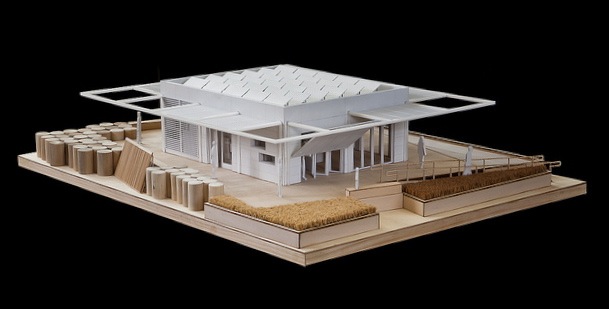 Built for the coastal Florida environment, this team is responding to their particular environment with a rather ingenious design.

The winged louvers on the house have a dual use, both acting to provide shade from the sun, while also having the ability to swing down to shutter and protect the house from fierce hurricane winds that can pounce upon coastal residents. 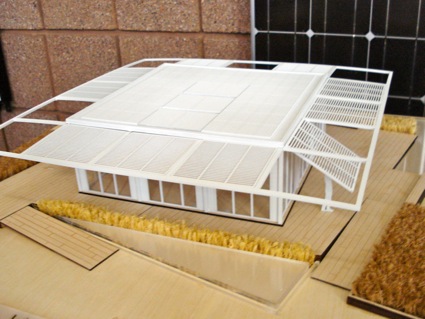 Thinking of how the house can move reminds me of a how a butterfly moves, hence the ‘dance’.  This, however, could be a problem depending on the systems that open and shut them.  (More on that later.)


The team wants to integrate both PV and Solar thermal into the house to provide energy and heat.


It appears that light will infuse the house from all four sides, allowing the occupants to save energy on indoor lighting during the day.  The shades will also potentially block the summer sun’s heat from entering the house whether the shades are up or down. 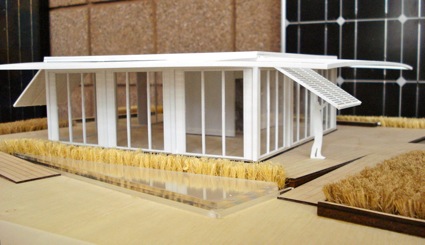 It will be interesting to see how the system will lower and raise the outer shade – wings.  Will they be automated or manual?

If they are automated and the electricity goes out with a rapidly approaching storm, will the windows be broken and need to be replaced?  Could the whole house potentially fly away?

If operated manually,  the house is inhabited by a younger or strong person or couple, it is feasible that both people could go out in the driving rain and wind to lower the shades.  Or could the shutters potentially fly away and off the house before they could be shuttered?)  It will be interesting to see what type of material the shades and the house are made out of.


I like the concept of this house, as indeed, it will dance to fit the needs of the occupants.  We’ll need to wait and see the house at the Solar Decathlon in the Fall of 2011.

This is a conceptual model of a competition house entered in the 2011 Solar Decathlon. The Solar Decathlon challenges university teams from around the world to create efficient, useful, attractive, zero-energy, solar powered homes. The 20 teams in the competition have created models and will construct their houses on the National Mall in the fall of 2011. The models were on display at NREL (National Renewable Energy Lab) in Golden, Colorado, this past April 2010. This was one of the 20 teams picked for competition with pictures and initial observations.