The Solar Homestead from Appalachian State

What follows is a conceptual model of a competition house entered in the 2011 Solar Decathlon. The Solar Decathlon challenges university teams from around the world to create efficient, useful, attractive, zero-energy, solar powered homes. The 20 teams will construct their houses in Washington D.C.  in the fall of 2011.  Here’s one of the 20 teams picked for competition with pictures and initial observations.

Appalachian State University from Boone, North Carolina is working on a Solar Homestead as an “adaptable, self-sufficient, rugged, affordable and attractive” home. 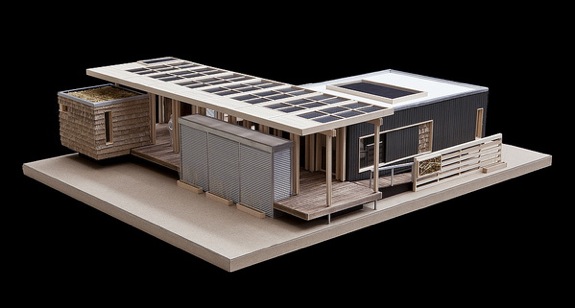 This 2011 Solar Decathlon entrant employs innovation in its use of different structures to create an energy efficient and a light infused home property.

It pulls historically from its homesteading past yet modernizes and streamlines it.

With its outbuildings, main house and connecting roof, it seems to operate like a little colony. 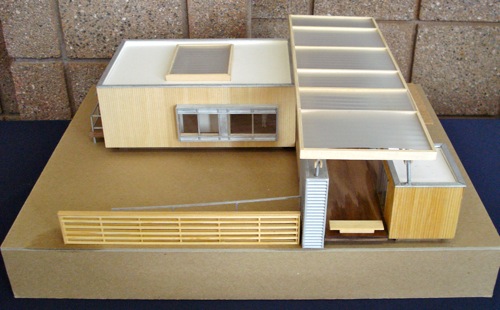 The outbuildings are to function as ‘solar collectors’ that will likely store the batteries that would store the energy from the photovoltaic and solar thermal panels.  I could be wrong on that assumption though.

The Solar Homestead appears to have two outbuildings near the front the property.

While it is not clear on which direction is south, I do like the appearance of wood paneling and corrugated steel as siding.

The model does show a good use of natural light.  The main house also has a large sky light that will allow natural light within the house.


The paneled roof on the entry way creates a nice sheltered path from the solar sheds to the main house and living area.  I imagine that this is a nice place to gather with friends, yet be sheltered from the rain, sun or other elements.

A sense of lightness seems to radiate from this model.  I’m not sure if it is the large windows on each side of the living area, or the sense of light filtering through the buildings with the translucent roof on the entryway.

It will be interesting to see how the team from Appalachian University will integrate their solar and electric systems into the overall building and property’s efficiency.


See another entry from the 20 teams in the 2011 Solar Decathlon.