The 4D Home from Team Massachusetts

– The team from Massachusetts is working to create their 2011 Solar Decathlon entry, called the 4-D Home, by combining a New England style of architecture within a different formation. They have seemingly combined three different buildings to create one. ***Since writing this entry, the team has changed its plans. See the newer model and video below. 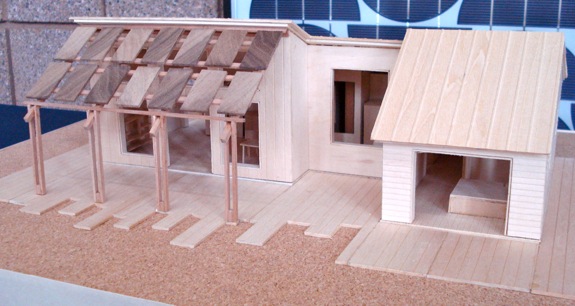 Each of the buildings look as if they are the typical triangle topped building, however, upon closer inspection, it looks as if two of the three buildings have been paired in half, from the top of the building down through the middle, so the resulting building is made from two partial halves and a smaller whole – connected together. It will be interesting to see how this will work, economically and spatially, when it is built.

It does, however, look like this configuration will allow the building to have passive solar gain.

It’s assumed that the side of the house with the windows will be facing the south. There is a checkerboard-like rectangular trellis that covers the largest of the southern facing porch areas. This interchangeable space that is referred to as a ‘dooryard’. They say that the checkerboard area will be covered with photovoltaic panels to provide electricity for the house. The ‘dooryard’ is slated to be an area that can serve the occupants as an open porch in the summer, as well as function an enclosed sunroom in the winter. The team plans to use removable glass panels to enclose the area. 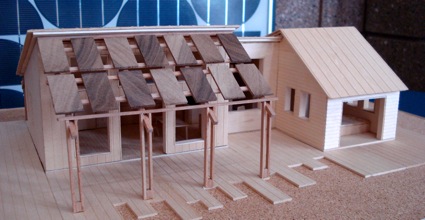 After looking at the model, I’m a little confused as to whether or not the removable glass panels will be in the 3 openings seen under the trellis, or if they will be surrounding the outer perimeter of the dooryard.  The solar panels topping the trellis, however,  would be useful in its dual purpose, by providing electricity for the house, while also providing shade in the summer.

This duel purpose ‘dooryard’ area will be an interesting one to see how the team works out the seemingly contradictory aspects of the space. On one hand, when one thinks of a a porch area covered by a trellis, it tends to be an area that has air flow and is generally a space that is frequented and enjoyed in the warmer months.

This last January 2011, the Solar Decathlon entrants submitted their latest model.  It looks like quite a few things have changed since the earlier model. 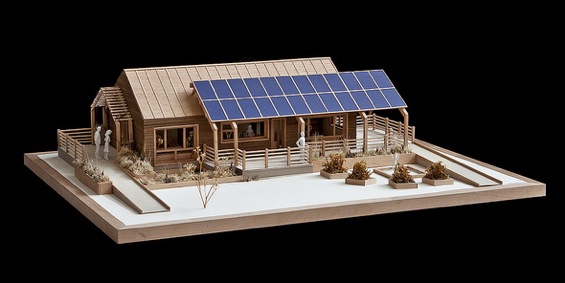 The house is no longer configured with three separate houses, but one traditional-style house.  This makes it more cost efficient as the lumber will not need to be cut in different sizes.  It’s not clear as to whether or not the house will still have an enclosed “dooryard” area.   In order to be efficient, some basic passive solar rules must be followed.

In the summer and winter, for a passive solar house to be efficient, it must have a fair amount of thermal mass and good insulation to keep the inside of the house warm. This predicament can cause potential problems.  How will the space simultaneously be engineered to be breezy in the summer, and well insulated and warm in the winter? It can be done, however, the removable glass panels would need to have a casing that is both movable and well insulated. 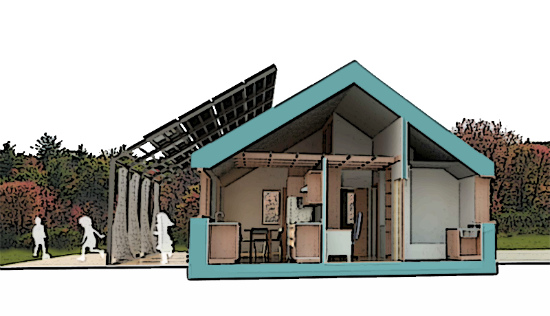 Diagram of the 4D Home from Team Massachusetts' website

Typically, when a sunroom is used to heat a house (when the sunroom is not adequately insulated) there is often a way to shut the sunroom off from the rest of the house. In these cases, there is usually some type of fan or blower system to move the warmer air quickly into the house.

The 4-D Home sounds like it will also have an interactive user interface that will allow the occupants to monitor their energy use. It is also said to be both affordable and comfortable. In order to see if the building will achieve its goal of Net Zero energy use, we’ll to see it in its glory at the 2011 Solar Decathlon.

The Team Massachusetts Website for the 4D Home 4dhome.us

This is one of 20 models of a competition home entered in the 2011 Solar Decathlon. The Solar Decathlon challenges university teams from around the world to create efficient, useful, attractive, zero-energy, solar powered homes. The 20 teams in the competition have created models and will construct their houses on the National Mall in the fall of 2011. The models were on display at NREL (National Renewable Energy Lab) in Golden, Colorado, for a couple of weeks in April of 2010, when I first went to have a sneak peek.