Living Light: The University of Tennessee

UPDATE: See the sleek Living Light solar home during the 2011 Solar Decathlon. The following is a review of the model written prior to the competition.

– The Solar Decathlon team from the University of Tennessee, Knoxville, has designed a potentially ideal passive solar house.  Called Living Light, if this long rectangular shaped house is placed on an east – west axis, it would potentially allow the winter sun to the enter the house through the windows on the southern-facing side of the house. The roof appears to have a type of overhang, which if properly situated and designed, would block the summer sun from heating up the house when it is not desired.  This type of design could drastically cut down on summer energy cooling costs.

The Living Light model from the University of Tennessee. Photo Credit: Dept of Energy Solar Decathlon

It appears that there are window walls on the two long sides of the rectangular shaped house.  These windows will allow natural sunlight to infuse the house with light during the daylight hours. While in colder climates this type of design could be a potential liability, as large windows on both the south and north side of the house will increase the amount of heat lost from the structure after the sun goes down, in the more moderate climate of Tennessee, the loss of heat through the windows may be less of an issue.

The house appears to have horizontal slats across the windows.  This type of fixed covering on the outside of windows can block the heat from the summer sun (rotating higher in the sky) yet will allow the winter sun (lower rotation in the sky) to enter and heat the house. 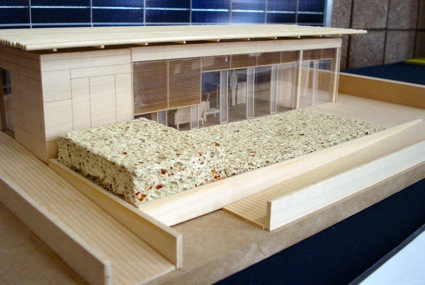 The Tennessee team also plans to use photovoltaic panels on the top of the house to help supply energy to the dwelling.

They are also planning on creating different spaces for public and private spheres, which they refer to as ‘cores’ within the inner part of the house.  They are segments within the inner living space that hope to give the occupants a feeling of privacy in certain ‘cores’ of the house, while allowing for the public ‘cores’ be spaces where visitors would feel welcome.  In addition, some of the spaces will convert from one to the other when needed.

The Living Light home model is also one of the first, that I’ve noticed, that has accessible paths to both sides of the house.


The team from Tennessee stresses that the Living Light house will be made from sustainable and locally made materials. While the types of materials in the house are unspecified, the use of materials with thermal mass, such as concrete or tile, would round out the specifications to allow this to be an efficient passive solar house.


See the sleek Living Light solar home during the 2011 Solar Decathlon.  It featured a sleek design and also used the cylindrical solar tubes from Solyndra.  This enabled it to actual outperform the other homes under cloudy conditions. (The actual efficiency of the cylindrical tubes is something that isn’t talked about.)

Back to the models for the 20 teams in the 2011 Solar Decathlon.