The Y-Box from Tongji University

A shared, main living area is located in the middle of the building where the three shapes converge.

This type of a living arrangement would adhere to the ideal patterns of living as I recall reading out of ‘A Patterned Language’, where it is recommended that the private living areas are linked together by a shared living area. 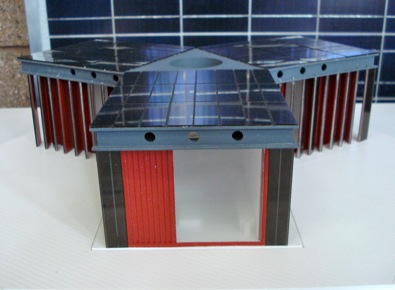 The early 2010 model from Tongji University

The team is basing this design off of traditional Chinese design philosophy that seeks consistency and coherency in design.

Photovoltaic panels and thin-film PV will top the shipping containers to help supply the building’s electricity needs.   The outer sides of the first model appear to have some type of vertical shade attached to it.

Will these shades appear on the final building?  A question arises as to how these shades will function.  I’m interested to find out if the shades will be used to somehow light and/or heat the building in conjunction with the sun’s movement.  It will also be interesting to see how both heat and light will work within this house.

While the inner shared space has a skylight, I’m curious as to how this type of dwelling will feel without a door into the shared living space.  There doesn’t seem to be one, but it may be tucked into the back of the model. 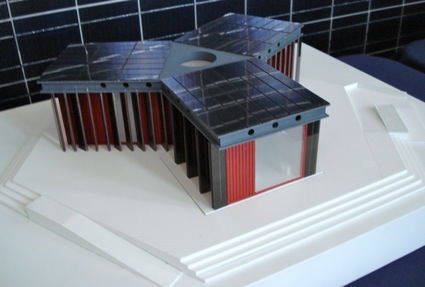 The early Y-Box model seems claustrophobic. Is it becasue of the dark colors?

I’m curious about the traffic flow in this house.  Will the kitchen and bathroom be housed in one of the shipping containers, with the other two containers being bedrooms?

I’ve been assuming that three shipping containers are used, however, it could be that perhaps 6 or more are used.

While looking at the various models for the Solar Decathlon, I realize that all these models are fairly small, but the early one in particular strikes me as slightly claustrophobic.  The latest model seen at the top of the post does not have the same claustrophobic feel. Could it be the frosted windows or the dark hues of the house?  Will the team be able to highlight their overall theme for consistency, comfort and ease in usability?


Solar decathlon teams can frequently surprise and awe in the transition from theory within the small scale model to the actual building with all its systems intact.   All the Solar Decathlon teams are working with cutting edge technology. It is exciting to anticipate what could be built.