Located in Colorado, a state with over 300+ sunny days a year, the home owner is taking advantage of the sun as an energy source and using it to provide both electricity and heat. 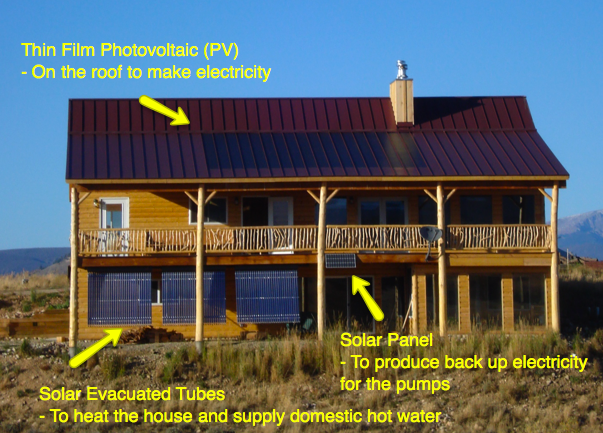 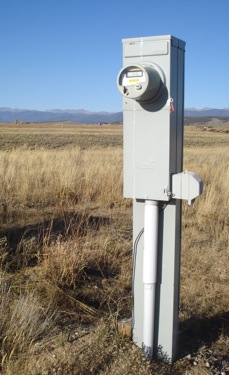 This is the net meter that keeps track of electricity flowing in and out of the system.

The passive solar house boosts its efficiency with active solar photovoltaics (PV) to create electricity.  While the house creates its own electricity, it is connected to the electrical grid.  These types of houses are referred to as being grid-tied.

During sunny days, the house generates electricity and sends it to the grid, while it also uses energy from the grid, particularly on cloudy days, during the night and early morning.

The post outside of the house shows the amounts of electricity flowing into and out of the system.  It keeps track of the net gain and/or loss of electricity. 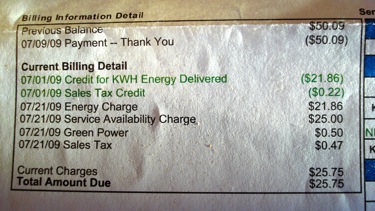 The summer electricty bill shows the credits, (energy to the grid) and charges (the extra 25 dollar fee) to be grid tied.

Here’s a picture of a summer bill.  It quite surprised me, so I had to take a picture.

During the previous summer, the house produced energy and sent it into the utility grid.  The owner was credited, but there is a $25.00 dollar charge for being connected to the grid.  In short, the owner used and excess of .75 cents worth of extra energy.  It’s not actually net-zero, but rather, net-less-than-one-percent, which is pretty good overall.  (I see that the math does not add up.   I’m not sure why, but that’s how it was explained to me. )  Also keep in mind that this happened shortly after the summer solstice, when the days are the longest. 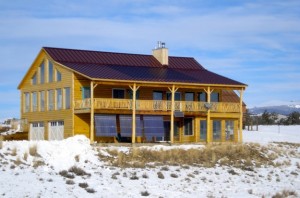 Thin-film photovoltaic (PV) technology is utilized on the roof. Thin-film PV is also referred to as amorphous silicon. When the sun shines on the thin-film, this action creates electricity.

In the summertime, when the days are long, the house actually can generate more electricity than it uses. When passing by this house, at a casual glance, a person could miss this type of PV because it blends in with the roof-line. Thin-film PV allow the cells to be as large or small as desired or needed, without having to be bound to the confines of a panel. Thin-film PV also allows the use of more cell surface for solar exposure potential. 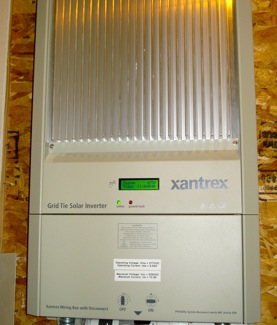 The inverter converts the solar generated electricity from DC to AC

This type of PV can have advantages in a climate where it snows because the thin-film PV is attached directly to the roof. As the sun hits the southern facing roof, it warms the metal roof and the snow simply slides off. There are no panels or other obstructions that snow can get caught behind.

When the sun hits the PV thin-film on the roof, a flow of electrons is created in a direct current (DC) electrical flow. Because most household appliances are created to utilize an alternating current (AC) and because the house is tied to the grid, the electricity must pass through an inverter before it is usable.

The inverter keeps track of the flow of electricity and changes the current from direct current DC to AC before sending it through the net meter. We’ll briefly go outside to see the solar evacuated tubes, before returning to see the rest of the utility room. 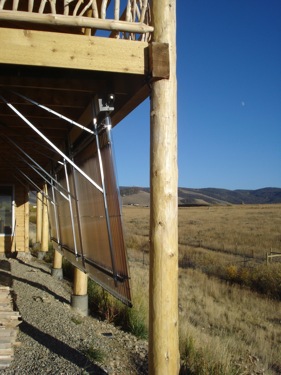 The solar evacuated tubes are located on the southern side of the house and are situated at a slight angle of 7 degrees both to help their solar gain in the winter and to help to the pumps function more efficiently.

They are situated to benefit from passive solar technology because they are tucked under to deck to shield them from the sun in the summer, as well as to help keep snow off of them in the winter. Because the solar evacuated tubes are vacuum packed, the liquid inside of the copper tube can get very, very hot, yet the outer glass will stay cool. If the tubes are covered with snow, or anything else for that matter, the heat from the sun can not be collected.  Because of where the tubes are situated, however, the higher summer sun will not hit the solar tubes, allowing the house to stay cool in the summer. 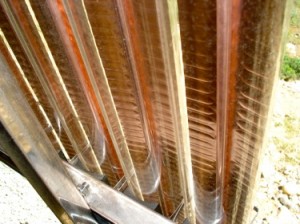 A copper tube in the middle encases the glycol mixture

The copper tube in the middle of the solar evacuated tube is filled with a glycol (antifreeze) mixture.  There copper tube has a metallic reflective sheath that helps to concentrate the sun’s energy to be transferred to the glycol in the cooper tube.

In the winter, when warmth is needed, the glycol gets hot when the sun hits the tubes and the heat is stored and transported back into the house within the glycol mixture.

The glycol flows into a utility room. 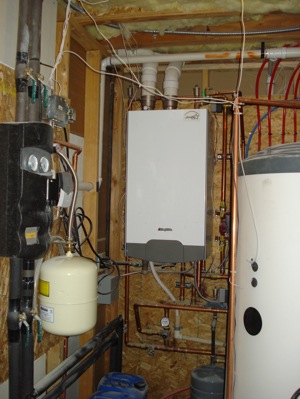 The glycol is contained in a closed-loop system and flows into the large water tank (right side of the picture) where the heat exchange takes place.

As the hot glycol flows through the tubes throughout the water tank, it transfers the heat into the water.

The water tank is also called a “Smart Tank” in that it has the ability to react to the demands of the thermostats in each zone (usually a room).

What usually happens on a sunny day, is that the collectors will heat up and a pump will move the glycol from the tubes through a coil in the bottom of the tank, where the heat is transferred to the water in the tank.  The subsequently cooled glycol, flows back to the collectors via the black pipes on the left side of the photo. The red tubes feed to and from each zone inside the house and work on the same heat exchange system,  also heated by the water in the tank.

Tubes were laid in the floor and the solar heat radiates from the floor to heat the house.  The water from the tank also supplies hot domestic water for the house.

If there is not enough solar gain, for example when the sun does not shine or when it is nighttime, then the tank controls the propane powered boiler, which has its own heat exchange coil within the water tank.  The back-up propane system continues to keep the warm the house, as well as supply hot domestic water when it is needed. 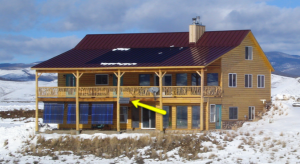 The arrow points to a small dedicated solar panel that will power the pumps in case grid-based power is lost.

There are many advantages to being grid-tied, as opposed to being off the grid.  Almost any sort of appliance can be used, without having to worrying about whether or not there is enough power in the system (a common worry in an off-grid house).  One disadvantage is that if the system goes down,  a grid-tied house will also typically loose all electricity.

Shortly after constructing the house, power was lost.  As a result, the solar tubes got too hot and started to malfunction (actually, I was told that they got fried). Because the sun continues to heat the glycol, a pump failure will fry the system, thus the owner installed a separate small solar panel that is dedicated to power the pump, thus, the allowing the liquid to keep moving and discharge some of its heat. 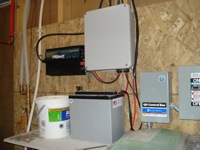 The panel stores the electricity generated from the solar panel in a battery.

Did I mention that the house also has a solar heated garage?  The garage is also a zone that was plumbed and is heated with in-floor radiant heat.  The garage also is the heat sink in the summer.  If the system gets too hot, it will push excess heat above and beyond what the system needs, into the garage.  The garage is situated so that it receives summer sun only in the evenings and is a cooler section of the house.  The active and passive solar house create both an ecological and economical advantageous house.

The owner estimates that approximately $500 worth of propane was used in the previous winter.  The propane delivery person estimated that most houses use about $600 worth of propane per month.  With extraction and petro-based energy sources being more difficult to obtain and having more volitile price swings, solar energy based building and construction methodology are smart choices.

This beetlekill log home is surprisingly efficient and very comfortable.  To see more of its passive solar design, head over to Part 1.