emPowerhouse, a joint venture between Parsons, The New School for Design, NY, NY and the Stevens Institute of Technology, Hoboken, New Jersey

– Can I say how much fun I’m having looking at these various houses, seeing the progression of creativity and ingenuity infused within all of the projects?

The emPowerhouse project is one that will immediately apply its technology and efficiency to benefit the community.

They have partnered with Habitat for Humanity and the Department of Housing and Community Development, and the house is already slated to go into the low-income Deanwood neighborhood in Washington, D.C.

This partnership creates a strong incentive for the emPowerhouse to be both affordable and practical.  In the 2011 Solar Decathlon, each team will be evaluated on 10 different aspects, one of them being a score on affordability. 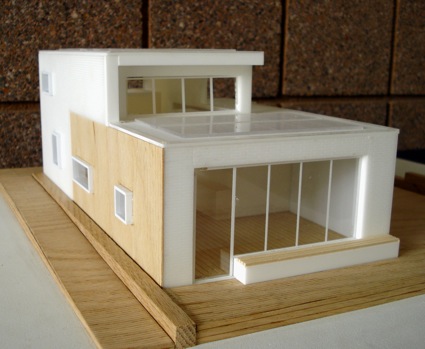 The early model of the emPowerhouse

Originally the project was designed as a duplex consisting of two different, single family modules, (module 2 is shown here) which when joined together, both parts would function as a more efficient whole.

As this is being written, it is not clear as to whether or not the finished model will be a single family dwelling or a duplex, as originally planned.  The project was originally entitled Better Together, yet the current project is now the emPowerhouse.  As with all projects, changes in strategy and design may have occurred.

Regardless of shifts in strategy and design, we can be sure that there will be some innovative technology within the build. 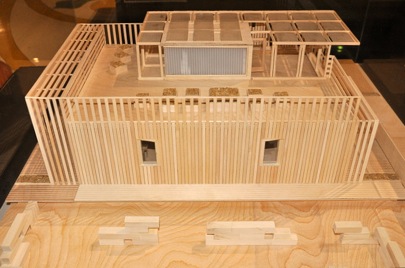 This type of a model offers outdoor living space on the roof. Photo credit: U.S. Dept. of Energy Solar Decathlon

Because the sun is the most reliable and locally available source of energy (the sun must rise everyday, and the clouds will eventually part) it can potentially be the most long term, cost effective source of energy.

The team plans to use a photovoltaic thermal hybrid solar system that will create solar based energy.

A photovoltaic PV thermal hybrid solar panel is engineered to use a portion of the energy that it generates to carry away some of the heat that can build up within the system.  A rise in the temperature of a PV panel is bad because it tends to decrease its overall efficiency. The PV thermal hybrid is a type of solar panel that I’ve not yet seen other Solar Decathlon competitors specifically name.

A positive aspect of this design is that the rooftop space can offer usable space that can be enjoyed by the inhabitants.

This type of a dwelling can be built in areas where there is less land available for leisure.  For example, there are some places where space is not available to have a front or back yard.

Outdoor space for leisure can include a lush rooftop garden or space for a summer barbecue that can be enjoyed on the enclosure on the roof.

Will the Parsons and Stevens team be able to achieve net-zero? We’ll have to wait for the 2011 Solar Decathlon this fall. (Hopefully it will be taking place on the National Mall!)