The New Location for the 2011 Solar Decathlon

It seems that a suitable alternative location has been found.  It will be located on the peninsula southeast of the Lincoln Memorial, near FDR Memorial Park, where the new Martin Luther King Jr. Memorial will commemorate its opening in August 2011.

The New Site for the Solar Decathlon can be reached by walking 1.5 miles from the nearest Metro station

The new location also puts the sun’s southern orientation at an odd angle, so the Solar Decathlon’s layout may need to be staggered so that the sun’s rays can be hit the solar panels and other solar implements, and so that the passive solar houses – all of which depend on facing the sun in a southern facing direction – will actually work.  It is the Solar Decathlon after all. 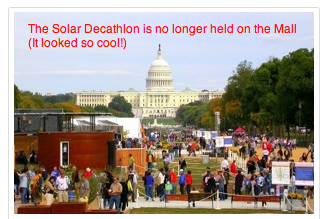 These are all slight challenges, all of which can be easily overcome with a little planning.  The need for southern orientation, however, must be taken into account.  (Can you imagine the disappointment if it isn’t taken into account and some of the solar gain is accidentally blocked by another contestant’s house?  It’s like getting fabulous new presents for your 9th birthday and realizing that all the presents need batteries – and that there aren’t any.  So the fun presents simply sit – tauntingly, unused, without life.  Surely this scenario can be avoided.)

I’m still optimistic about the various efficient solar houses that the different teams will create and trust that all the teams will build the best net-zero solar-based houses that they can create for the 2011 Solar Decathlon.  I’m enthusiastically looking forward to it.  It’s a large enough space.  It should be fine.

More information about the Solar Decathlon and the 20 Teams

Announcement from the Dept. of Energy – Solar Decathlon on the new location of the 2011 site