Self Reliance from Middlebury College, Vermont

– Building upon and modernizing the framework of the former New England farmhouse, the 2011 Solar Decathlon Team from Middlebury College is building a house called Self Reliance.  Its design integrates traditional aesthetics with modern and efficient methods.

A traditional-looking house, the southern facing side of the house will have both a photovoltaic (PV) array and hot water panels to provide electricity and hot water for the house. 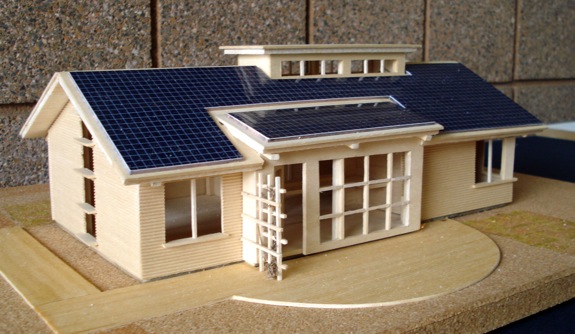 Middlebury, Self Reliance - an earlier model

The house, however, will have a greenhouse on the southern side of the house and growing area just outside of the windows.

In the picture of the latest model, it looks like a winter garden may also be grown during the winter months. Will the team have a system to deal with the potential condensation within the house?

The Middlebury team also plans on harnessing water runoff by using a deck with rain barrels and some sort of system to funnel the water to native plants. It will be interesting to see if vegetables and other edibles will also be grown.


It will also be interesting to see how the team integrates the heat of the house and whether or not the space that the angled roof creates, will be used.  It may have use as some sort of loft.  Heat does rise, so it could potentially be used as a warm space, or not – we’ll have to wait and see how the team’s vision becomes a reality during the 2011 Solar Decathlon.


To see other models, head to the 20 teams in the 2011 Solar Decathlon page and click through the list.