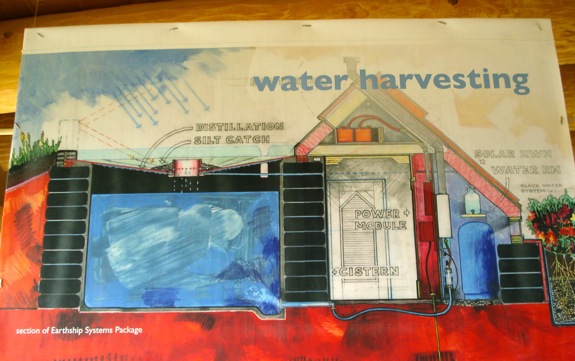 This picture was taken in the Earthship Visitors Center showing how water harvesting works. 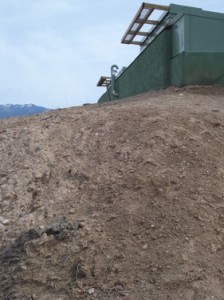 As stated earlier, the idea behind the Earthship is that it is a holistic, sustainable system.

Water is collected, stored, filtered, and utilized by the Earthship.

Edibles can be grown inside and could potentially support the occupants with food, while they are also part of the water filtration system.

The northern facing side of the house, the back of the Earthship, is bermed. After the tire wall is built, dirt is pushed up against the house.

The berm also protects the water cistern(s) that are also buried behind the house. 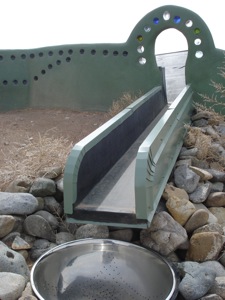 Water from the roof goes through a sieve and into the cistern.

When rain and snow fall on the building, the water is collected from the roof and is guided to be stored in cisterns.

Within the dirt berm, the water cisterns are protected from the sun (usually the cisterns are large plastic water tanks) while this also keeps the water from freezing.

It looked like three different cisterns were collecting and filtering the water for household use.

The roof also supported a few photovoltaic solar panels that supply electricity to the house. 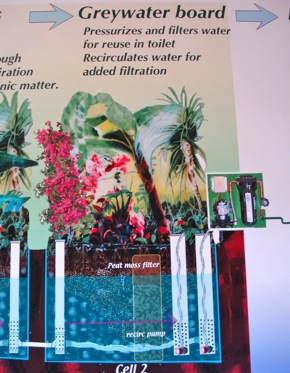 After water is used for general washing purposes, it drains to the planters for initial filtration.

After the water is collected, it is filtered mechanically before it is used by the occupants for either drinking or washing purposes.

After its initial use, often utilized for various types of washing, typically for taking a shower, washing the dishes, or washing one’s hands, it is sent to and filtered through the planters.

Fresh green growing in an Earthship

The plants in the greenhouses are part of the water treatment system, where greywater (water already used once in the sinks for washing) is recycled, and used by the plants, while the planters simultaneously filter the water.

Here is an example of how the water travels through the Earthship cycle.

After a person takes a shower, the water has been used once, and becomes greywater. 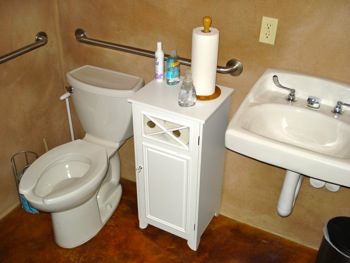 The toilet can have the plumbing routed to utilize greywater.

It then goes to the planters as greywater but nourishes the vegetables in the planters. The planters provide food for the occupants of the house, while they also act as primary filtration devices.

The water travels through both planters as well as mechanical filtration devices before being used again, usually for the purposes of flushing a toilet.

After being used in that manner, the water is referred to as ‘black water’ and goes to an outside filtration module.

As I toured the Earthship, I tried out the bathroom, which was a regular, flushing toilet. The water appeared clear, although by that time, the water had been used and filtered 4 times before it was used in the flushing of the toilet.  It  then left the dwelling to be treated.

Continue on to Electricity, A Work in Progress and Pros/Cons on Page 3