The Flex House from Team Florida

Four Florida Universities are working together to create and present the Flex House for the upcoming 2011 Solar Decathlon. 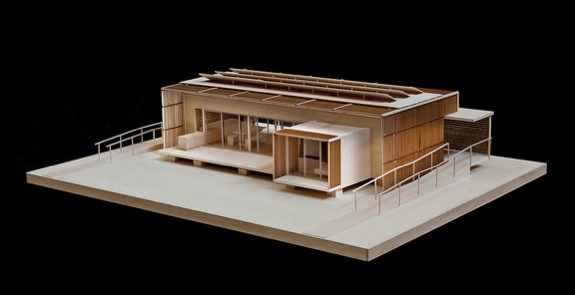 Because the house is being designed and built for the hot and humid climate of Florida, the house seeks to keep the sun’s heat energy out of the house, while allowing ample outdoor light into the house. They plan on using the sun’s energy to provide both electricity and hot water for the dwelling.

The potentially net-zero house is rectangular-shaped, with a sheltering roof that overlaps the building. This will potentially allow for a greater amount of roof space for photovoltaics (PV) and solar thermal capabilities, both of which are planned for the Flex House.

The extended roof also provides shade for the dwelling. In the hot environment of Florida, this is needed to keep the sun’s heat energy out of the house – throughout all of the seasons.

There are sliding panels on the south and north walls that allow for convective air currents to travel through the house to cool the house.

On one end of the house, a solar chimney will allow the warm air to rise and leave the building.

The southern windows appear to be recessed to allow the potential for passive solar cooling. There are buildings in many hot parts of the world that shade the thermal mass within the building to help keep it cool. (Think of a large domed marble building in a hot environment like India. The marble has thermal mass that helps to absorb heat. As long as the sun is kept off the marble, it will tend to stay cool.) Similar passive solar-types of cooling also are in the plans for this building as well.

The team plans to use a mixture of stick-built and Structured Insulated Panels Systems (SIPS) to build an optimal zero-energy home for a hot and humid area.

The team from Florida also has plans for some sort of system to collect rainwater for a cistern. This, however, does not appear to be on the current model. 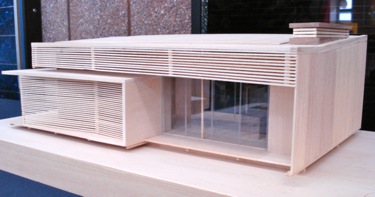 Within the house, there are plans for inner partitions that can be moved to allow for increased energy savings by being able to potentially partition off a portion of the house for heating and cooling of only that specific section.

The climate of Florida has an average annual temperature of 67.1 degrees Fahrenheit in Tallahassee, to 77.8 in Key West.


I’m excited to see how the Flex House turns out, particularly to see the desiccant waterfall.

They plan on having an interior desiccant waterfall to absorb some of the humidity. (It’s would actually be like an anti-waterfall and have the opposite effect of an actual waterfall.)

Air would pass by some type of desiccant, usually in the form of silica gel or zeolite, that would pull the moisture out of the air.  After absorbing the excess humidity, the desiccant would be dried out, usually with the application of heat.

It is possible that both active and passive solar concepts would be used to power the desiccant waterfall.  I’m interested to see what this will look like and must wait until this fall.

Check out Team Florida’s website to see the progression of their building process: flexhouse.org