Team Tidewater, representing Old Dominion University and Hampton University from Virginia, is creating an innovative, efficient building that incorporates aesthetics and innovation for their entry into the 2011 Solar Decathlon.

Combining both passive solar design and build techniques with active solar electricity augmentation, this team appears to be on the path toward an efficient solar house.

They are one of the few teams that has stated that they will be including materials with thermal mass within the build to ensure that the heat from the passive solar gain will be stored – then released to warm the house throughout the evening. 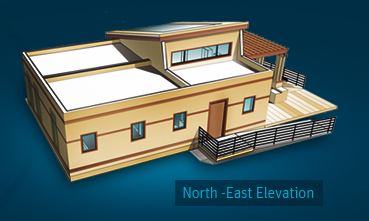 The northeast facing side of the model. From http://teamtidewater.odu.edu/

Because they are located on a typically warmer, coastal area, they can use more windows on the northern facing side of the house without worrying to much about heat gain loss.

It will be interesting to see what different types of mechanisms will be used for heat transfer from the front of the building, where most of the heat from the southern facing windows will be absorbed, to the back of the house, where it is typically colder.

It looks like there is a trellis on the western side that has vegetation going on it.  This would be a nice addition as it could help to absorb some of the summer heat.

The plants that are chosen will have some importance, as I’ve experienced walking under a trellis to an entrance of the house, and could not avoid stepping on some of the grapes that had fallen. (The owner thought it would be nice to have grapes vines growing on the trellis, yet forgot about how they would need to be maintained during the season, and could not keep up with them.) Subsequently, these little stain pods were tracked into the house.

Cleaner types of vegetation are something to keep in mind.  This could potentially cut down on the care, yet offer some of the benefits of using plants. 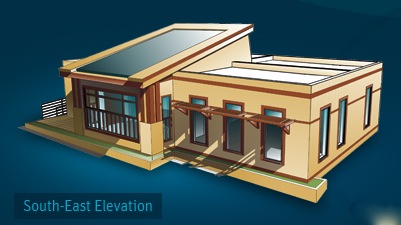 Here is the southeast facing side of Unit 6 unplugged. From http://teamtidewater.odu.edu/

Windows on the south side of the house have a type of wooden awning that will block the summer sun from entering the house.

Most of the windows appear to be ‘fixed’ type of windows (that do not open and as a result are less susceptible to air loss and hence more efficient) while there is a large window in the main living room, that can open from either the top or bottom to allow heat to escape.

It looks as though active solar panels, thermal hot water panels or some sort of thin-film PV will be attached to the roof.

After seeing a house with thin-film PV in a snowy area, I’m increasingly a fan of the type of active solar augmentation because thin-film is attached directly to a surface; it does not have extra mounting hardware that acts as something that can get snow, leaves, trash or anything else stuck within the housing. 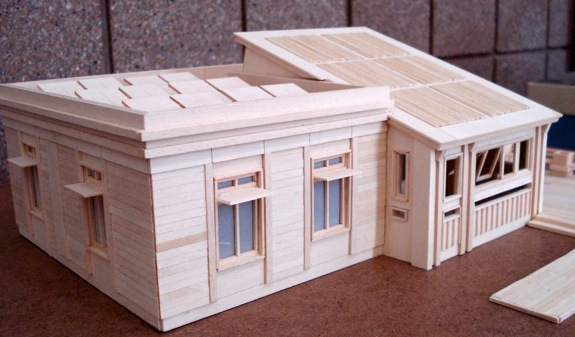 Similar to other teams, the Tidewater Team has made some modifications to their earlier design.

The house appears to have flipped so that the portion of the house with the angled roof has moved from the southeast, to the southwest side of the house.


The solar panels on the square portion of the house look to have been removed.

Changes within the design process happen often and may have been necessary changes as the team researches the amount of energy needed for the structure and plans the inside of the house.

The video shows the house and its different construction modules. It also gives a computer animated walk through of the house.

This is one of 20 models of a competition home entered in the 2011 Solar Decathlon. The Solar Decathlon challenges university teams from around the world to create efficient, useful, attractive, zero-energy, solar powered homes. The 20 teams in the competition have created models. The models were on display at NREL (National Renewable Energy Lab) in Golden, Colorado, for a couple of weeks in April of 2010, when I first went to have a sneak peek.