There are shiny beacons of hope and success that exist within the current economy and business climate.  Creative and entrepreneurial spirits are building prosperous businesses while serving their communities.

I recently had the opportunity to visit KTAO, the largest solar electricity based radio station in the nation. Located north of Taos in New Mexico, the new owners are creating an adaptable, indeed, a thriving business based on a model of diversification and serving the surrounding communities.

The solar panel isn’t the real reason why KTAO 101.9 FM is a solar radio station.

When approaching the station, a huge solar panel array greets the visitor, yet these shiny wafers of silicon are not the real reason that makes KTAO a solar radio station.

I must admit, I was a bit skeptical before going to the station. I wasn’t sure how a radio station could possibility be based off of solar. But after visiting, I’m really impressed. 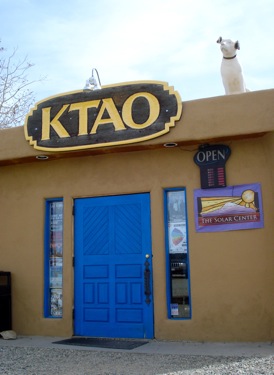 At a time when conventional media venues such as newspapers and radio stations are struggling to adapt to the new communications landscape, KTAO is thriving.

But first, how exactly is KTAO a solar radio station if the large solar panels in the front have nothing to to with the radio operations?

Here is the history: The station’s previous owner, Brad Hockmeyer, had been working with the radio station since the 1980s.

The radio station was originally transmitting a radio signal from an antenna outside of their mobile-trailer that was the base of their operations. The 3,000 watt signal could barely reach the whole community living within the hilly terrain of Taos.

Hockmeyer found an ideal location for a radio transmitter southwest of Taos, at an elevation of 10,800 feet on Picuris Peak.

He looked at the prospect of getting electricity wired up to the peak and learned that it would cost $300,000. 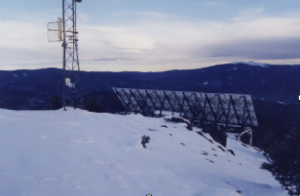 The solar array in the winter – and the view from the peak.  Photo credit: Shannon Black

After researching alternative electrical generation that included wind turbines with a propane generator backup, he settled upon solar after finding out that it would cost a little under $200,000 to install a solar array that would provide the electricity to power the radio signal transmitter.

An Earthship structure, created with the ability to passively store the sun’s heat energy and keep a constant temperature, was built to house the sensitive electronic equipment.

While the temperature on top of the mountain peak regularly drops below zero and is often combined with raging bitter cold winds during the winter, the Earthship, built by ramming hundreds of pounds of dirt into each of the recycled tires, has created a structure that has enough thermal mass to keep the inside temperature constant, enough to safeguard the sensitive electronic equipment and keep the temperature within a stable 25 degree range.

The solar array that powers KTAO’s signal is made from 135 solar panels.  Photo courtesy of KTAO

Thus, KTAO hails as a solar radio station because of the large solar array placed on top of Picuris Peak that transmits KTAO’s radio signal well beyond the locality of Taos, NM.  The use of a solar powered radio transmitter allowed the radio station to increase its reach from a 20 mile radius to a 40 – 50 mile radius, being heard as far away as Alamosa, CO to the north and Albuquerque to the south. By increasing their range, their audience also increased by 10 fold.

A radio station being driven by solar energy is vulnerable to the inevitable experience of a string of cloudy days, during which its signal will weaken; yet within the historically sunny climate of New Mexico, it is also inevitable that the sun will again provide electricity.

In addition to being the largest solar powered radio station in the nation, KTAO is quickly gaining a global following with more in their audience tuning in via the internet. 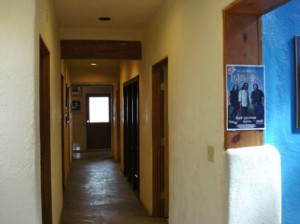 Inside the KTAO Adobe Building

I initially thought that KTAO was a community radio station. (I think I thought this because I once attended a farmer’s market in their parking lot and simply assumed.) It is, however, a private radio station that has eclectic programming, with strong ties to and a record of service to the community.

Their programming includes “Lost and Hound” where community members can call in a lost or found animal, and “Trash and Treasures” a radio format of announcing the sale of and purchase of random objects. This show has even had a call from the Netherlands.

(Ahh, the internet. I firmly believe that if any media source has consistently good content, it will be sought out and found with many returns.)

KTAO’s music programming includes a diverse range of music that regularly features  funk, blues, jazz, Native American and world beat along with providing a youth and even an astrological perspective to the Taos, NM area.

Continue on to Page 2 –  The Solar Array and Solar Center