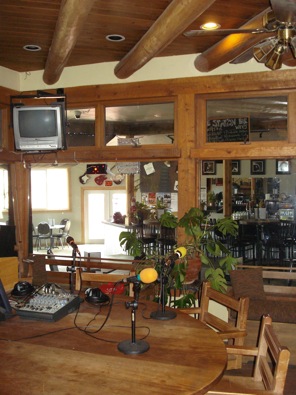 Radio shows can be broadcast live while seeing and being seen by the restaurant patrons.

The solar radio station is only one part of their business. They also have other activities that fuse into the music scene and the community.

The current owners, all former employees, purchased the radio station from Brad Hockmeyer about one year ago.

The owners are comprised of two couples, each person contributing both skills and energy into the project. Aldan Bain is the sound engineer and IT Director, Katie Speirs is the Production and Music Director, Kate Black is the Sales Manager and her husband Shannon Black is the Venue Manager.

The new owners have diversified the previous base of the radio station and sporadic concert venue, to a year round events center with concerts and events happening every weekend.

The main building is an old adobe structure, over one hundred years old, that was once a restaurant. Because of its former designation, the current business owners also inherited a liquor license. They have a bar, food menu, and can cater indoors as well as outside. Radio shows can be broadcast live while seeing and being seen by the restaurant patrons. 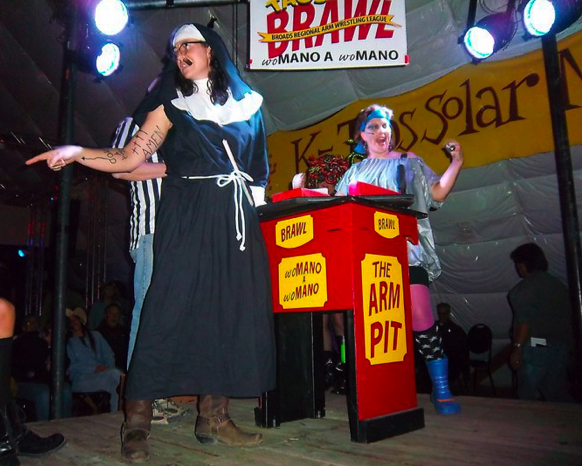 Along with the two radio stations (one is a regular radio station using regular old fashioned power – Luna 103.7) they can host weddings, event fundraisers and a wide range of other events. (Whew!)

There is an outdoor grassy area complete with a backdrop of the Taos Mountains, that can be utilized and rented during warmer seasons.

They can host almost any event throughout the year, recently hosting a ski patrol fundraiser, while they are set to host high school graduations later this spring and early summer.

As an example of the wide range of events that they frequently host, here is a picture from the Taos Brawl, a Women’s Arm Wrestling Championship – Fundraiser taking place in the Solar Center. 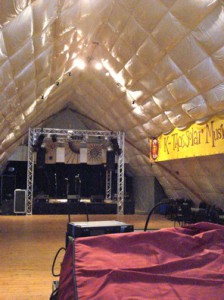 Inside the Solar Center

The business also includes the Solar Center, a covered venue that can hold up to 300 people. A huge soft-tent-looking structure, it is actually a concert and gathering space that is well-insulated both from the outside elements as well as for sound.

Even if it is below zero outside in the winter, the space will quickly warm up, as it is insulated with a R-48 fiberglass batting that keeps the space toasty and warm.

The current owners have ramped up the schedule, with concerts and events happening almost every weekend. They regularly host national, big name performers at the Solar Center. 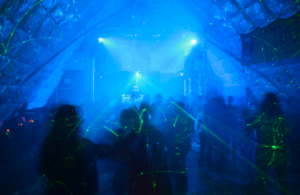 Inside the Solar Center for a concert.  Photo credit: Shannon Black

There have been many instances when a performer is on tour and will play before an enthusiastic and appreciative, yet smaller Taos crowd, while their next stop is in Albuquerque is at a sporting arena in front of thousands.

The large solar array on the side of the KTAO parking lot.

What’s up with that large solar array in the parking lot?

Driving up to KTAO, the visitor is greeted with a huge solar array.

Within the last year, the local electrical co-op, Kit Carson Electric, approached KTAO and asked to see if they could use the land to host the panels. 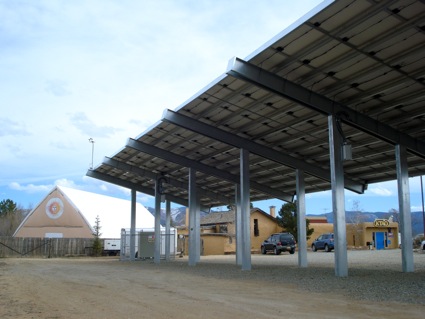 Another view of the Solar Center and KTAO Radio Station

The array is grid-tied and creates energy during the day then feeds the electricity into the grid, which the surrounding homes and businesses utilize.

It also provides a nice shady area that can be utilized in the hot summer, while the panels are pumping out electron juice and feeding it to the electrical grid. I suspect that the area under the panels becomes a coveted parking spot in the summertime.

Thus, the largest solar radio station in the nation continues, sailing a steady course in the rough waters of the current economic and media times.

KTAO is being steered by the skillful and enthusiastic new owners combining a diversified business model that successfully serves and contributes to the surrounding communities.

Someday I’m returning to check out a concert and dance!  Boogie down!

The Solar Center’s upcoming concerts or contact them if you’re interested in renting the venue or advertising with them.