UPDATE: See the built TRTL home at the 2011 Solar Decathlon.  This home had a lot of buzz during the Decathlon.  A review of the model follows below.

The University of Calgary is creating a house for the 2011 Solar Decathlon that is called TRTL: Technological Residence, Traditional Living.

In contrast to some of the Solar Decathlon entrants with sharp angles, the University of Calgary is creating a house that has the smooth shape of a curved dome.

The 2011 Solar Decathlon entry from the University of Calgary, from their website www.solardecathlon.ca

The house was created for an Alberta, Canada, based Native American client, and is modular in construction.

This type of prefabricated construction allows the house to be constructed at one site, then transported to the home’s site to be quickly built within days.

The Canadian Team is working to create a house that combines sensitivity to a traditional culture while synthesizing it with technological advances in sustainable and renewable energies.

This is a unique Solar Decathlon entry in that it seeks to cater to a specific cultural demographic.

Having previously lived for two years on the Navajo Reservation in the States, I am strongly aware that there is an acute need for efficient, strong and  relatively maintenance-free housing on the reservation.

I found it ironic that the reservation that I spent time on experienced strife and controversy stemming from the mining of energy resources; in their case it is was coal.  After it was mined, the coal slurry (coal and water mixture) was transported through a pipe for approximately 300 miles to an electricity power generation plant located in a different state (Nevada). This operation polluted the surrounding air, land and water.

This happened at a time when solar energy freely, regularly and generously pounded its potential energy onto the land and inhabitants.  “If only the solar energy could be harnessed,”  I regularly thought.  The TRTL building, however, will utilize the energy from the sun in both passive and active ways. 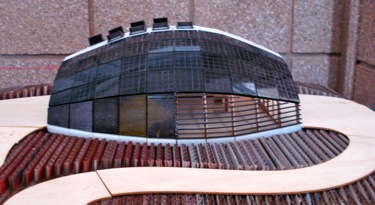 The southern facing side of the structure features large panes of glass that would ideally allow passive solar heat gain from the sun in the winter time.

Ideally, if some sort of material with thermal mass is placed on the southern side of the house, the material could absorb, then release the sun’s heat throughout the cooler evening and night.

The curved southern facing side of the dome is covered in photovoltaic (PV) solar panels that will help supply the house with electricity.

The team plans on creating a house that is sensitive to cultural issues, while it is still both practical and durable.

They plan on using materials that will make it resistant to both mold and fire.  I’m interested to learn more about the building science within the integration of the different systems that are used to adequately deal with both the necessities of water and air.


The designers from the University of Calgary are also cognizant of the different realities within land ownership that can exist on a reservation.

Often, the tribe will own the land, while families and individuals members of the tribe can secure land use leases, typically for 60 years. Because of this reality, modular or prefabricated houses work well and are often utilized for building on a reservation.

See the TRTL home built at the 2011 Solar Decathlon.

Check out the University of Calgary’s website to learn more about the TRTL project: solardecathlon.ca