The University of Hawaii, Honolulu, is creating a sustainable and efficient house that is well suited for tropical regions for this year’s 2011 Solar Decathlon. The Hale Pilihonua has lofty and noble ambitions, especially when creating a house that combines state of the art efficiency, while remaining affordable and attainable for middle income home buyers. 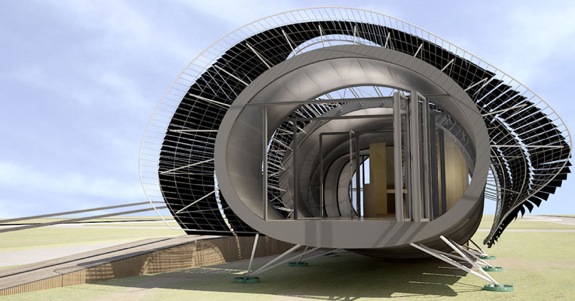 Design and built specifically for a tropical climate, the team from Hawai'i is creating Hale Pilihonua. Photo from their website www.solar.hawaii.edu.

Regarding energy use and efficiency in homes, keep in mind that a well-built, well-designed house can potentially save the homeowners thousands of dollars that would ordinarily be spent on utilities. An efficient house saves the homeowner more money over time.

Recent news: On June 1, 2011, Team Hawaii announced that it is withdrawing from the 2011 Solar Decathlon. Press release

This project, along with others, has undergone a name change, going from the Monocoque House, to a name based in the Hawai’ian language, Hale Pilihonua, meaning “a built structure connecting earth and land”. 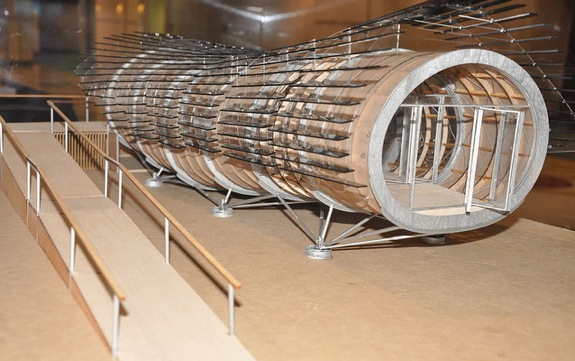 Hale Pilihonua is a rounded shell created out of a plant-based material that has been reinforced with a polymer, making the structure a well-insulated, yet strong and lightweight. Anticipating different, potentially harsh environments that a housing structure can be subjected to in the tropics, the material is said to resist humidity-based types of corrosion as well as invasion from tropical pests. The material is also bouyant and can float if the home encounters flooding.

To help provide electricity, the team is incorporating water-cooled photovoltaics.

I’m interested in this and am wondering if they are planning on pulling the water out of the atmosphere (by allowing the panels to collect humidity from the air) or if they intend on having some sort of closed or open loop water cooling system. A cooling system is important because photovoltaic (PV) panels function more efficiently when they are kept from getting too hot.

The house is made out of a plant-based reinforced polymer that can float in the case of flooding. Photo Credit: U.S. Dept. of Energy, Solar Decathlon

A frame has been built around the shell of the house.  Both types of solar panels (PV and hot water) will likely be attached to the metal frame surrounding the circular home.

In order to cut down on phantom sources of electricity (when an appliance is off, but still ‘sucking’ electricity) they plan on using some sort of system that will be able to sense if people are in the house, called “intelligent occupancy sensing”, that would control electricity levels to lighting and entertainment applications.

The team from Hawai’i is planning on using passive solar heating and cooling strategies by using materials with thermal mass, calling them ‘phase-change’ materials, for both radiant floor heating as well as cooling that takes place in the ceiling. I’m not sure how they are going to work this out, but I’m looking forward to seeing this in action, mainly to see the materials used, as well as their positioning within the house. 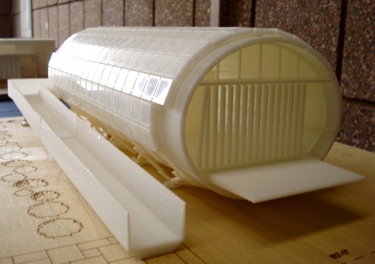 This is a picture of the early model taken in April 2010.

The glass featured in the ends of the house will be Low-E in order to reduce heat loss at night. I’m not sure if this is a necessity, as in a warm tropical environment, a homeowner may want the glass (very little insulating value) to allow heat to dissipate out the house during the cooler evening and night. Depending on the direction that the house is facing, the windows may not need to be triple paned. I know of houses that utilize triple paned windows in Winter Park, located in the cold snowy mountains of Colorado, however, tropically Hawai’i has a very different, much warmer, and tropical climate.

The house appears to be elevated on raised stilts. This is a helpful feature that would leave a smaller footprint and would cut down on the tropical-critter-factor. It will also help to allow the structure to create its own internal environments, yet the materials used, along with their positioning in the house relative to the direction that the glass is house is facing are very important. 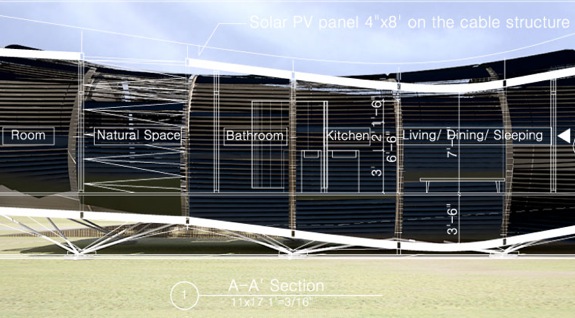 The team from Hawai’i is also planning on including a food growing system, called an ‘aquaponic’ system, or more commonly referred to as a hydroponics growing system, that would allow food to be produced. When these types of growing systems are introduced within the living areas of the house, the increased humidity and problems with mold quickly can become issues.


Overall this this project holds a lot of potential and should be a very interesting house, especially since tropical areas tend to be densely settled and as the global weather patterns potentially become more erratic, Hale Pilihonua could be a valuable contribution to global tropical housing.
To see other models, head to the 2011 Solar Decathlon page and click through the list.