Thermal Mass Inside the House

In an an effective passive solar building, there must be materials with thermal mass.  Adobe is a hard mud/straw mixture that has a fair amount of density and thermal mass.  An adobe brick wall gently curves around the inside walkway, acting similar to a Trombe Wall – so that the sun’s heat can be absorbed, stored and radiated from the wall. 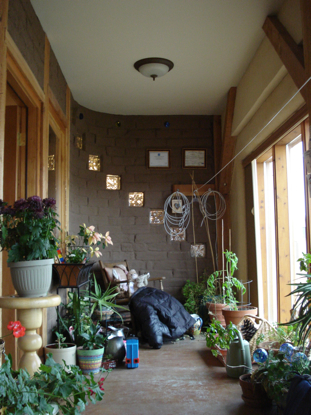 The view as one enters the home.  The adobe brick wall wraps around to the entry door. 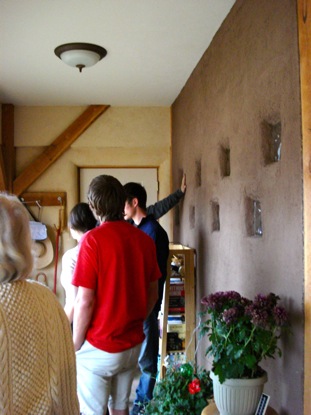 View looking back towards the entry door.  The adobe wall absorbs the sun’s heat in the winter.

The beauty of passive solar design is that during the summer time, the sun’s heat does not enter the home, thus the thermal mass also helps to keep the home cool.

The timber frame of the house can be seen by the door.

This is the front entry way to the home, which also is a place where laundry can be hung on sunny winter days.

The Concrete Floors in the House 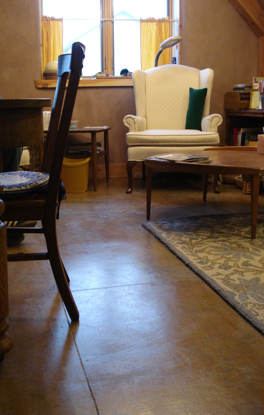 The concrete floor in the house has thermal mass and has radiant solar heat.

The floors are concrete, also a material with thermal mass.

Before it was poured, fly ash, a byproduct that occurs from the burning of coal, was added to the mixture.   The addition of fly ash strengthens the mixture, while allows for less concrete to be used.

The straw bale house sits on top of a concrete slab on grade, with 4″ foam polystyrene (blue board insulation) underneath it.

When building with straw bale, care must be taken to consider all the materials that the straw comes in contact with.  Because concrete is hygroscopic (it absorbs and maintains moisture) either a vapor barrier or a water sealer must be used on the concrete before the straw bale is put on top.

Solar evacuated tubes on the roof that help to heat the home.  Under the concrete, there is a series of radiant heat tubes looped throughout it.  A glycol mixture runs through the tubes and into a water tank.  The heat from the glycol is transferred to the water, which is then sent through a series of radiant heat tubes set throughout the concrete floors.

The solar evacuated tubes on the roof

When radiant in floor solar heat is used, energy is saved not only because the sun is heating the liquid running in the floor but also because the heating temperatures of the liquid do not have to get as high as for other types of water heating.

Plaster on the Walls of the House 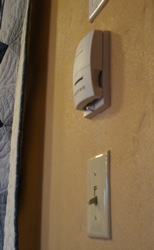 The walls are covered with a clay plaster.

The inner walls of the house are covered with plaster.

Plaster is made from clay, silica sand, mica, wheat paste, and color.

The color in the plaster is typically made form pigments, minerals or oxides. 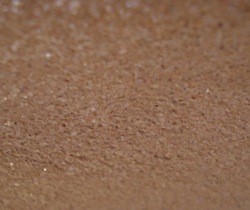 A close up view of the plaster on the walls. See the little bits of rock?

While the plaster is covering regular drywall, a positive aspect of using plaster inside of a room is that as the walls absorb humidity, as it is released, they are said to give of negative ions, similar to the effect when it rains. 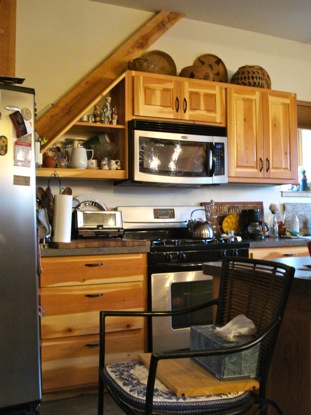 The kitchen cabinets were made from locally cut and milled Douglas Fir.

The cabinets were made from Douglas Fir wood that was cut and milled in the neighboring San Luis Valley.

While planning and building a sustainable house one should consider how far materials have traveled and factor in the energy used in the transportation of the materials. 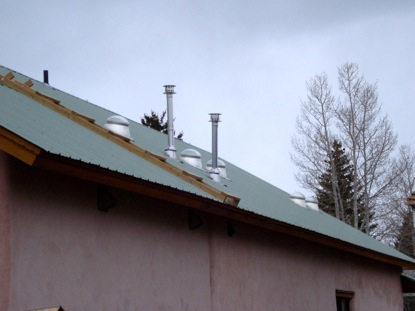 The north side of the house has only one window and utilizes solar tubes to let light into these northern rooms.

Rounding out the features of this home, showing classic passive solar design features, the northern facing side of the house has only one window.

Windows with regular glass have an R-value of R4, thus in a passive solar house, to help keep it warm, windows are typically minimized on the north side of the home.

Since the thick insulation of the straw bales is better when uninterrupted, yet to allow light into room, solar tubes were installed in the roof to let light into rooms situated on the northern side of the home. 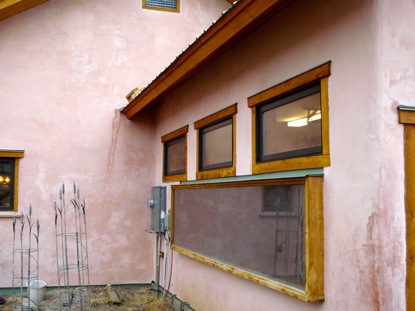 A solar heater is mounted on the southern side of the garage.

A solar heater was also installed on the southern facing side of the garage.

When the sun hits the metal and warms the air inside of the panel, air is circulated from the solar air heater into the house by a pump.  (I’ve heard of these being passive, using the movement of hot air rising, instead of a pump, but this is one of the first actual ones that I’ve seen on a home, so I wanted to include it.)

This passive solar straw bale home is a very comfortable, while its thick walls give a sense of strength and security. The absence of the fans and motors associated with forced air heating create a quiet atmosphere as the floors radiate heat. Only two years old, it’s efficient build has saved the owner thousands of dollars in smaller utility bills. The owner spent $500 dollars for the year on natural gas and electricity. As a comparison, I live in a smaller, yet uninsulated older house and in the winter, I spent 110 on gas alone.

While special considerations steps must be taken when working with straw bale during the building process as well as for upkeep, the beneficial elements may outweigh aspects of building with other materials. For example, after it is built, as the building settles, gaps will need to be caulked and steps taken to preserve the integrity of the covering, however, this type of upkeep is no different than, say, needing to paint every few years. Straw bale is a sustainable building material, while depending on how well the bales are packed and plastered, can offer excellent insulation value.

Thank you to Dusty Szymanski and his company Straw and Timber who took the pictures during the building process and for teaching the class!