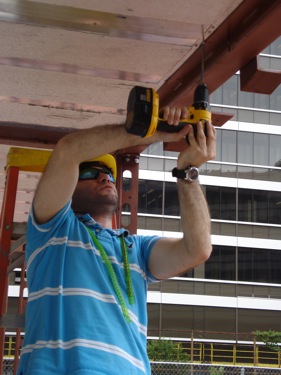 All the student Solar Decathlon teams have a construction sponsor that oversees the project.

Absolutely crucial in the process, their role is to guide the student teams, ensure that building codes are adhered to, and provide the guidance that will ultimately steer one team to the podium in the Solar Decathlon. Sciame, a local New York City construction management company, whose CEO and Chairman also happens to be a City College alum, is sponsoring this Decathlon team.

The team will be using state of the art windows – something called Nanopool that will serve different functions on the different sides of the building. On the southern side of the building, since that side would potentially be absorbing a lot of sun, some sort of clear gel that also provides some insulation, will be used.

On the north side of the building, they will be using a different Nanopool-type of window that will have a thick gel, that will allow light in, while it also has insulating properties. I don’t understand exactly how it works, but I’m planning on attending the Solar Decathlon in D.C. this fall and will report on it when seeing it in action.

When I spoke with students, asking them about various aspects of their project, they spoke of these state of the art building materials as if there weren’t anything else. “Nanopool windows? Why, they are windows that have a clear gel in them that allow light in, while having insulating capabilities,” casually replying as if it’s the most normal thing in the world. 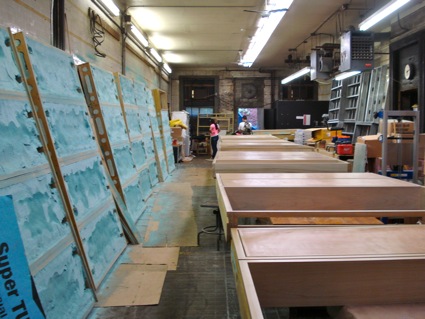 Upon entering the building, a viewer sees the pieces of the home that have already been prepped and are awaiting assembly.

The wall panels were constructed with wood and a polystyrene insulation has already been blown in and shaped. The wood paneling gleamed in the light.

Boxes of materials, supplies and appliances were steadily arriving to be assembled and tested in the final construction of the house.

Earlier in the day students were testing appliances with Kill a Watt, a device that measures the draw of electricity that different appliances use. 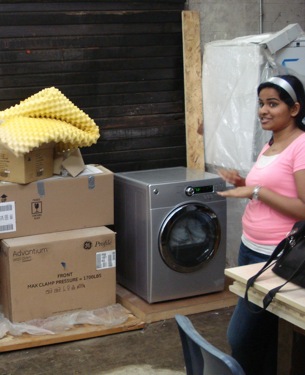 Students must test all the appliances not only for usability, but also efficiency. Architecture student Relbin Thomas discusses her concerns.

Each team will need to measure both the potential solar-based input of electricity into their homes, while also calculating the amount of energy that each appliance uses.

They explained that research had been done for all the appliances as well as electrical, water and heating/cooling systems in the house. At this point, testing is being done to see if the systems will perform as expected.

The team tried out the new washer and were trying to find a way to hold the appliance down as it shimmied during the wash cycle.

In the upcoming Solar Decathlon competition each team will have different strategies to get the maximum amount of points within the 10 different categories.

With each team working to maximize their points, the competition will be good one to watch. 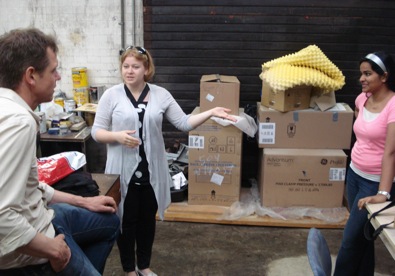 The CCNY Solar Decathlon team has the distinction of being the one of the most culturally diverse teams.

Dinner at their Solar Roof Pod should be a treat as they plan to include different types of food to represent the team with delectable recipes from Greece, Dominican Republic, New Zealand, India, China, Germany, and perhaps other countries.

Since two dinners are being hosted, the jurors are being encouraged to issue fewer points for teams that cook similar dishes on the dinner party night.

The Solar Decathlon has contest aspects that include a wide array of different tasks. Along with operating computers, hosting dinners and a movie night, the structure of the building must be efficient and built for its specific use.

Best of luck in the upcoming competition!

Thank you to the City College of New York Solar Decathlon team for allowing me to visit their construction site and for sending photos.

Click on an image to view it in a larger format. Hover over the right side of the picture and “click” to advance to the next image. 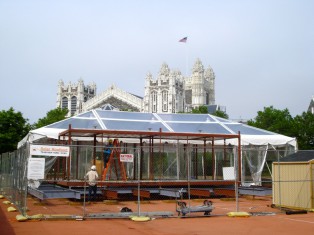 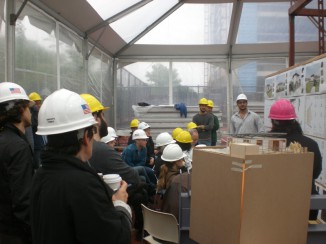 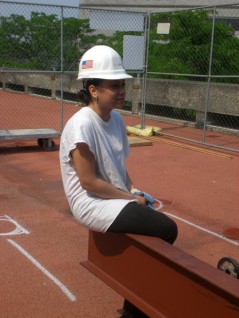 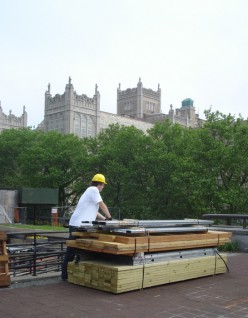 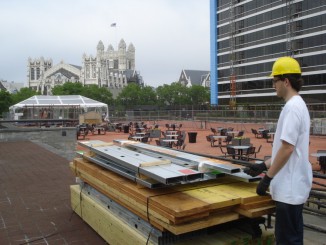 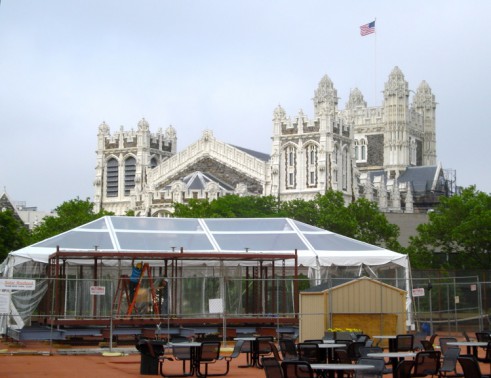