UPDATE: See the ENJOY house built for the 2011 Solar Decathlon.  The following is a review of the model.

Rutgers University and the New Jersey Institute of Technology team up for their 2011 Solar Decathlon entry called “eNJoy!” The New Jersey team is using precast concrete as their main building material for their Solar Decathlon beach house.  They are the only decathlon team using this type of material.  Concrete can have advantageous qualities for building a passive solar home, along with a couple of things to watch out for. 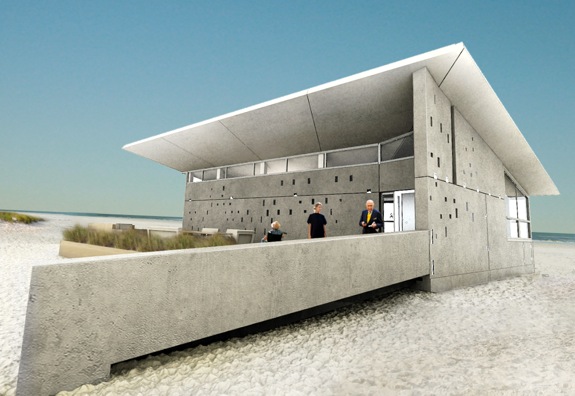 The house has sharp, nontraditional angles, giving it a futuristic look.

The team plans to use a concrete material sandwiched around a core of insulation.  The use of concrete as a material with a large amount of thermal mass allows the house to store passive solar heat throughout the day and release the heat throughout the cooler evening and night.  This can be a very effective passive solar house, if designed well and if it takes into consideration a few other elements. 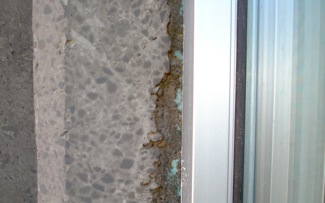 This picture shows an outer layer of concrete with the blue insulation between the layers by a sliding glass door.

During the winter when it is typically colder outside, the temperature extremes between outdoor and indoor temperatures are the greatest.   In the winter months, depending on the amount of insulation, the rate of heat transfer or heat loss through the walls may impact the overall comfort of the inhabitants and may be a potential energy liability.

It could, however, function marvelously – depending on the materials used, along with the building’s orientation. As an example of this, let’s say that the sun is shining on the concrete during the day on the outside of the house.

As the heat travels through the concrete, it will hit the layer of insulation and a little of the heat from outside will be transferred inside the house.

Similarly, after nightfall, when the sun stops shining and the earth rapidly begins to cool, the wall, because the material will loose the heat and become cold, depending on how thick the insulation is, the outside temperature will eventually start to cool down the inside of the house.

Is it correct to believe that the outer part of the house will collect and transfer the sun’s heat into the house?   It will first be transfered through the concrete, then hit the insulation before it is transferred inside. 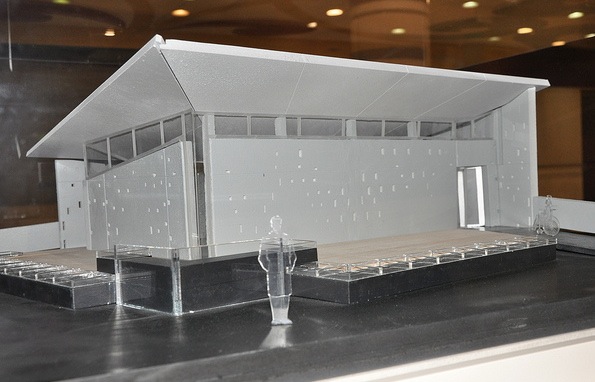 This is likely the north-facing side of the house. Jan 2011 model - Photo Credit - U.S. Dept. of Energy, Solar Decathlon.

If the house has enough mass and a lot of insulation, then the hot and cold temperature extemes will not be transferred from outside to inside and vice-versa.

Passive solar design should ideally be tailored to different climates and take into account other environmental concerns.  While I have my criticisms, they stem from my experience living in sunny, cold and snowy climates.  This type of home could work marvelously for a warmer, coastal environment.

Typically, in order for a passive solar house to be efficient, insulation is located outside of the thermal mass.  The thermal mass located inside of the house can absorb heat from the sun throughout the day, then radiate it in the controlled environment to warm the house later in the evening. While their design is different than the tradition passive solar design, the team may strategically place and use the materials to their advantage to have a passive, efficient home. 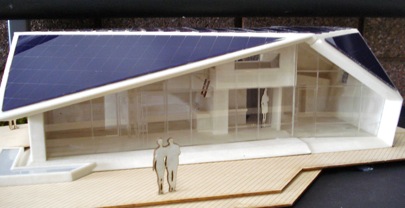 An early April 2009 model of the home from Rutgers and NJIT.

The New Jersey team has made a few major changes from the first to second model.

In comparing the two models, it looks like they have switched the roof line and roof pitch perhaps to economize their solar gain.

The house will use some type of active solar panels on the southern sloped roof to help supply energy to the house. Initially, the team was planned on using a mixture of both fixed and tracking photovoltaic panels but this may have changed. The three different angles previously displayed were likely not as efficient for the amount of space covered by solar panels.


See the video to see a rendering of their finished model.

The home will be modular in nature and transported in three main sections.

The house has an interesting roofline with an inverted hip to maximize the solar gain.

The sloped roof will also show itself inside the home, giving it a contemporary, modern feel.

This house is unique in the materials that is uses and may outshine its competitors depending on the climate and weather during the Solar Decathlon. We will have to wait and see.

See the actual ENJOY house built for the 2011 Solar Decathlon.