UPDATE: See the Watershed home in all its glory at the 2011 Solar Decathlon.  This home placed 1st in the Solar Decathlon, also winning the Architecture category along the way.  The original review of the model follows below.

– For the upcoming 2011 Solar Decathlon, the team from the University of Maryland, College Park, is striving to create an affordable and efficient solar home called Watershed.  The home will have the ability to utilize the sun for heating and electricity, as well as function in a synergic relationship with the surrounding aquatic environment.

Taking inspiration from the natural ecosystems of the Chesapeake Bay area for its ability to utilize, filter and recycle nutrients from the surrounding environment, the home seeks to mirror the symbiotic environment of the estuary.

The Watershed Home, a passive and active solar home for the Solar Decathlon is being built by the University of Maryland. From their website: http://2011.solarteam.org

Made up of two rectangular forms  joined together in the middle, the roof lines are pitched inward toward one another.

The angled roof makes the southern-facing side ideal for solar photovoltaics, while both sides can collect and direct rainwater for use on the property.


The design of the home combines passive and active solar systems, integrates sustainable materials with live vegetation (in the form of a green wall) and includes a water harvesting system. 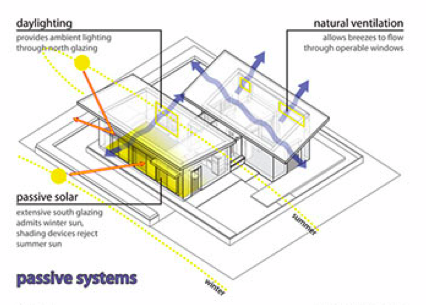 The passive solar design allows the sun to enter into the house in the winter, but is blocked in the summer. The heat passively can exit the home. All diagrams from http://2011.solarteam.org.

The windows on the southern facing side of the house allow the home to passively heat and cool the house.

Because heat naturally rises, when the home warms in the summer, the heat will naturally (passively) leave the home through the higher windows located near the upper, north facing side of the home. 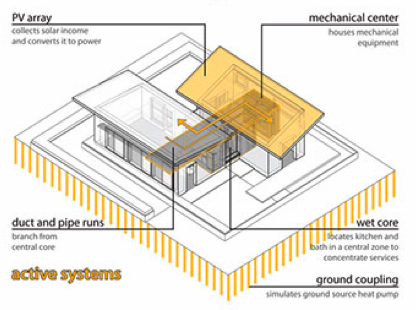 The southern facing roof will have photovoltaic cells that will allow Watershed to generate solar-based electricity.

Solar photovoltaic cells, possibly in the form of thin-film, will be placed on the southern facing roof to help the home generate electricity.  It’s not clear if there will also be solar thermal or any sort of solar heating for water in the home.

They are employing smart design by placing the kitchen and bathroom near the source of either heat or electricity generation so that the utilities do not have far to travel before being utilized.

Since this home is destined to be built in a warmer, coastal environment, the pipes located the outer perimeter of the building should not pose an issue.  (In colder climates the pipes could be in danger of freezing.) 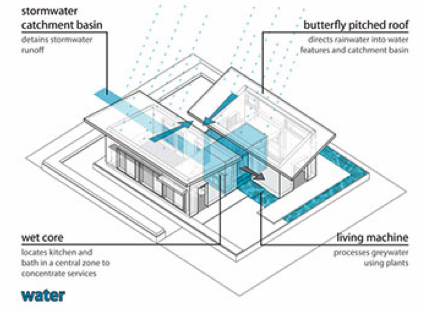 The pitched roof allows water to be collected, filtered, stored and utilized by the home.

There seems to be conflicting information on the water system.  The diagrams on the website show that water will be collected, but the DOE website is currently stating that the roof will be a ‘green one’ with plants to slow the water runoff.  Perhaps it is both?

It’s assumed that it would be put through a purification system for its respective household use.

There is a grey water processing system that utilizes plants for filtration.  Grey water is water that has been previously used for normal washing purposes such as washing the dishes or taking a shower.  If the occupants are using biodegradable – plant friendly soap, the water can be used to supply nutrients to plants.  This is similar to the holistic systems of Earthships. 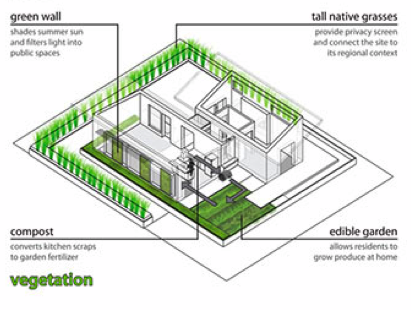 Vegetation will be utilized around the home to cool and create a sense of a boundary while it is also part of the water filtration system.

The use of vegetation the surrounds most of the perimeter will compliment the home by enhancing its living spaces providing shade for certain areas while it creates a natural barrier for the home.

Vegetation scraps left over from the preparation of food will be used as compost fertilizer for the garden.

It appears that plants may be used as part of the water filtration system, as indicated above in the water system diagram.

The team from the University of Maryland also plans on using cost effective, sustainable types of materials throughout the house.

In addition, “smart technologies” such as controls for the temperature and humidity will allow for air exchange and comfort. 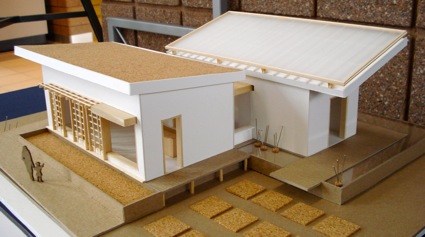 An early model of the Watershed House taken in April 2010.

The Watershed house has potential, depending on the quality of the systems and integration of materials used in the house.

I hope that there will be a wide range of temperatures and weather during the upcoming 2011 Solar Decathlon, as some homes are being designed and built to perform in certain conditions.

It would be spectacular to see this home in rainfall with water cascading onto the V shaped roof.   It would also be interesting to see the home utilize the rain water. We’ll have to wait until this fall to see the home in action.


This is one of 20 models entered in the 2011 Solar Decathlon. The Solar Decathlon challenges university teams from around the world to create efficient, useful, attractive, zero-energy, solar powered homes. The 20 teams in the competition created models that were on display at NREL (National Renewable Energy Lab) in Golden, Colorado, for a couple of weeks in April of 2010 when I first went to have a sneak peek.