The University of Illinois is building the Re_home for their entry into the 2011 Solar Decathlon.  The Re_home is one that can be deployed as a “sustainable disaster relief solution” to be built quickly and provide housing for people living in communities that have been affected by natural disaster.

The Re Home is a modular-type of home that the University of Illinois is building for the 2011 Solar Decathlon. Photo Credit - U.S. Dept. of Energy Solar Decathlon

This type of housing is one that is in demand and could potentially fill a growing need.

The news has recently been filled with various types of natural disaster that have hit many areas around the world. The recent catastrophic events have included tornadoes, tsunamis, earthquakes and flooding.

The Re-home’s modular design allows the home to be transported to the site and assembled quickly. 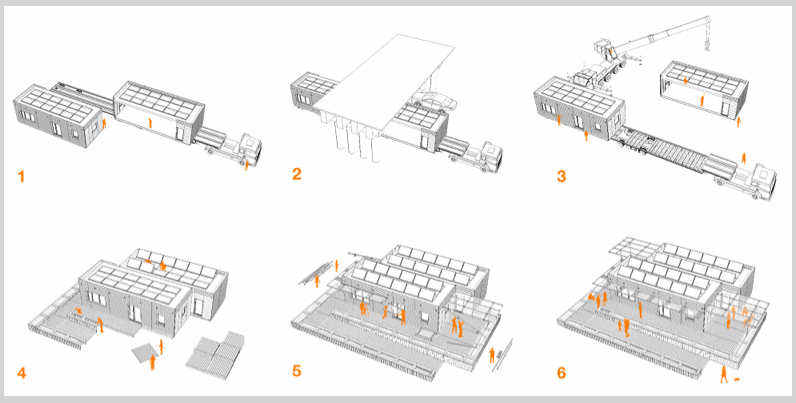 The Re_Home can be quickly set up to provide needed shelter from the elements after a natural disaster. Photo Credit - www.solardecathlon.illinois.edu

The Re_home has design plans for efficient use of daylight as well as the use of adaptable types of furniture that can have duel uses for both work and rest. These types of design would be ideal for any small living space.

At 978 square feet with two bedrooms, one bathroom, a kitchen, dining and living room, it can house a small family of four or accommodate two couples. 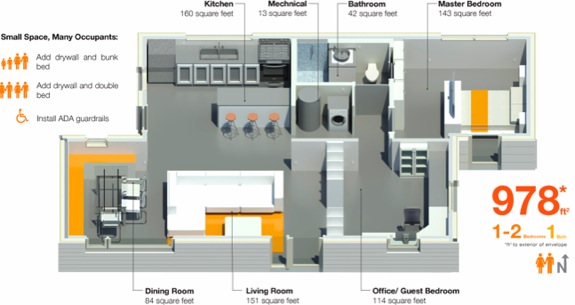 After a disaster, people may not have readily available food in the grocery stores, thus the creators of the Re_Home are planning garden areas where the occupants can grow food that is irrigated with a rainwater collection system. This is a welcome addition as it will likely take longer  than a growing season to rebuilt a permanent dwelling.

The home has both active and passive solar elements to it.  The house will have an adjustable mounted monocrystalline 7.2 kilowatt photovoltaic array on its roof to help generate electricity.   The home has some passive solar aspects with its windows on the south side that also have shading or a solar control to block the summer sun’s energy from entering the home, while they will allow for solar heat gain in the winter.

The home will be well insulated by combining both exterior insulating panels, as well as internal wall insulation.  If we knew that the home would have some thermal mass to store the sun’s heat, it could potentially be a more efficient passive solar home, however, we’ll have to wait for the Solar Decathlon to find out more about the inner materials. 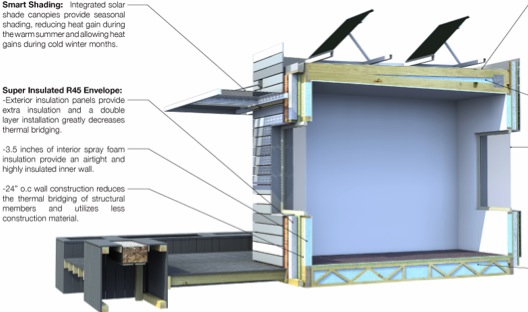 The Re Home has windows on the southern side, solar shades, combined with good insulation - almost all the the texbook passive solar design elements. Photo Credit - www.solardecathlon.illinois.edu

Because the goal of filling a need in extreme circumstances has propelled this team to integrate many sustainable types of design within the build, if it is to be temporary, the cost and the build should be inexpensive. It should also be integrated with a system that shows people how to live in the home.  The team estimates the cost of the home to be around $250,000.

While this solar powered house has some great qualities, is well thought-out and utilizes perhaps the most reliable source of energy that could supply a home with energy after a natural disaster (the sun!) there is something about a temporary solar house that is a little disconcerting.

The earlier model of the Re_home taken in April 2010.

Is it precisely because a lot of thought has gone into the house that its temporary status is perplexing and beguiling.  After the grid is rebuilt and infrastructure is rebuilt, do the occupants move back into a badly designed and built – energy consuming house?  What would happen to these ‘disaster solutions’ after the community is rebuilt?  Would they be quickly deconstructed and reused or would they go into being part of the landfills? Would they be built out of a biodegradable material?  Even though the appliances are energy efficient, do they get tossed after the new home is built?

The home does have good qualities and will be up against the other Solar Decathlon teams in 10 different decathlon contest competitions.

Check out the website for the University of Illinois at Urbana-Champaign to learn more about the Re_home project: solardecathlon.illinois.edu