Built by Rutgers, the State University of New Jersey and the New Jersey Institute of Technology for the 2011 Solar Decathlon, the home comfortably inhabits the seemingly contradictory extremes of lightness and strength, practicality and sparse modernity.  Perhaps it’s the aesthetics of the ‘floating roof’, a transparent band of glass that seemingly supports the roof. 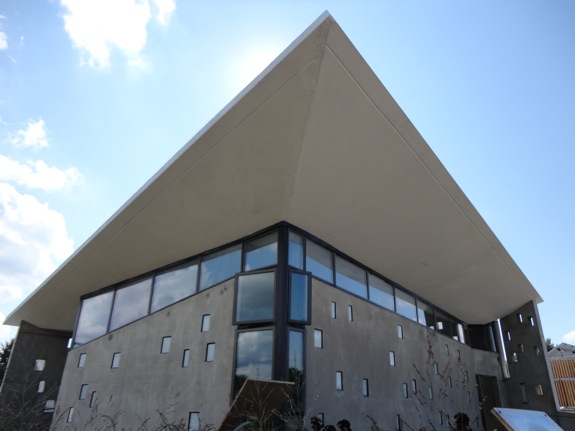 The 960 square foot home entitled EnJOY, the Solar Decathlon team used precast concrete for a building material.  The concrete fortess-like home exhibits a feeling of lightness, while having incredible amounts of mass. 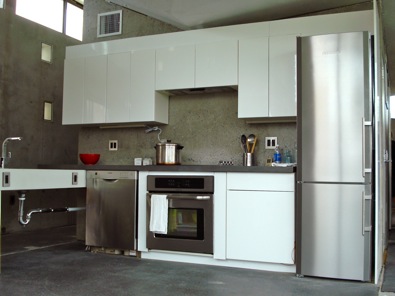 Concrete was used in the kitchen walls, counters and even for the sink. (It’s a smooth white in the left hand side.)

Because of its design, on an overcast, cloudy day, the house was filled with natural light.

Concrete was also utilized as the wall material inside of the house.

The counter, sink and wall in the kitchen are also made from concrete.  A large amount of concrete has gone into this house.

The tremendous amount of mass in the house helps it to maintain a stable temperature.

The material, overall design and orientation make it a passive solar home; its overhang blocks the summer sun, while it can take in the full winter sun. 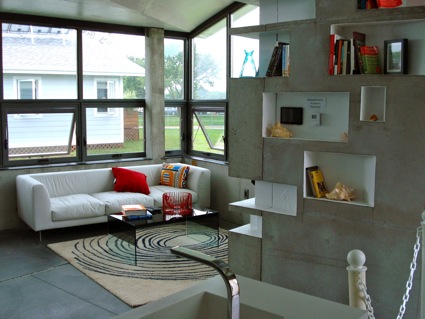 The bookshelf was also designed and made out of concrete. This give the home a tremendous amount of thermal mass potential to stabilize the termperature of the home.

A view of the living room looking to the south shows part of the passive solar design layout of the home.

Because it faces the south, the sun’s light will illuminate the home throughout the day.

In addition to being an ingenious and practial use of concrete in the design, the concrete bookshelf is made of a material that has thermal mass.

It will receive and store the winter sun’s heat energy and will slowly release it to warm the house through the cooler evening and night.

Passive solar design utilizes the predictable movements of the sun through the seasons. The summer sun rotates a high and long arc through the sky, while in the winter, the sun travels a lower, shorter arc. 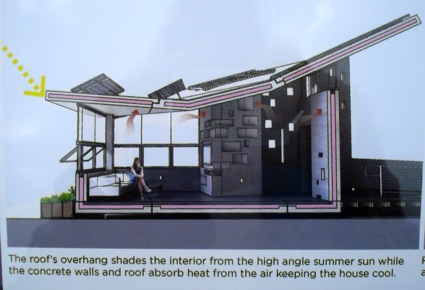 The diagram shows how the overhang blocks the summer sun. The insulation within the concrete is also shown.

In the summer, the overhang blocks the sun and does not allow it to enter and warm the house, so the termperture of the house stays cool.

When the sun is traveling a lower winter arc, when the home’s windows or glazing are facing the south, it allows the sun to shine deep into the home.  The dense material absorbs the solar heat and releases it throughout the cooler evening and night.

The house has a band of windows under the roofline that allows light to stream into the house from all four directions. This gives the house a feeling of both lightness, yet consistently feels strong. 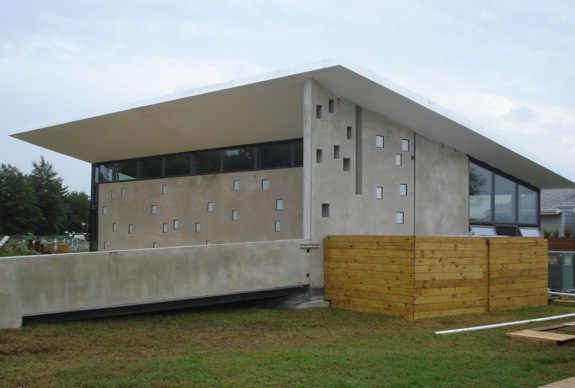 The 2011 Solar Decathlon Home from Rutgers and NJIT. Their precast concrete home seen from the northwest

This home combines both passive and active solar elements.

Two types of active solar can be seen on the roof: evacuated solar thermal tubes and photovoltaic (PV) panels.

The evacuated solar thermal tubes can be seen on the left hand side of the picture and to help supply the home with hot water as well as preheating for the radiant floor heat.

The solar PV panels and thermal evacuated tubes can be seen on the roof. The evidence of an inverted hip roof can also be seen.

There is also a 9 kW photovoltaic (PV) system to provide electricity for the home.   The inverted shape of the roof has been calibrated to have a 25 degree angle for optimal solar efficiency. 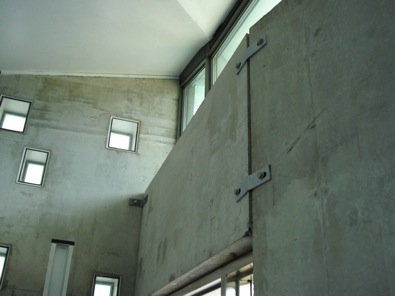 Small windows throughout the home and a band of windows under the roofline allow light to stream into the house.

To give this home the fortress-like look, the house was built with precast concrete panels.

The inner foam insulation has a rating of R-30, while the wall itself is around R-45.

The thickness of the walls can be seen in the windows that puncuate the concrete.  The windows allow light in, while they allow little heat to escape.

Air is allowed to circulate by operable windows that can be opened to allow the convective currents to cool and allow circulation through the home. 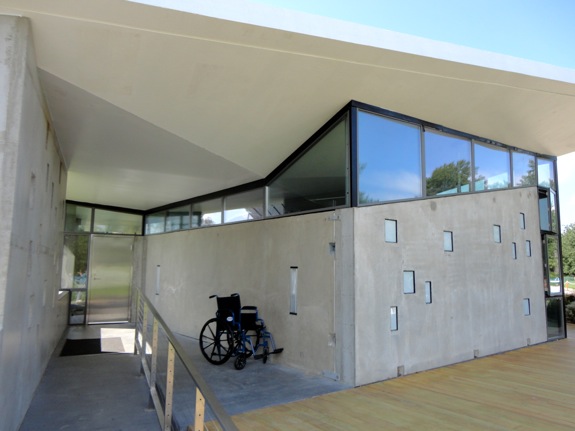 The Team from New Jersey created an innovative entry into this year’s Solar Decathlon.  Not only is the home a modernist art deco, but it was also designed and built to be ADA wheelchair accessible.

See the picture gallery below to see more details of the concrete ‘EnJOY’ Solar Decathlon home.

View from the living room

The bookshelf was also designed and made out of concrete. This give the home a tremendous amount of thermal mass potential to stabilize the termperature of the home.

The summer sun is blocked, while the winter sun is allowed into warm the house.

The Team from New Jersey comprised of Rutgers, the State University of New Jersey and the New Jersey Institute of Technology (NJIT) built a home that was estimated to cost $389,000 and finished the 2011 Solar Decathlon in 18th place.  Regardless of the placing, the team of over 250 participants over a span of two years, had an invaluable experience in designing and building a home from start to finish. 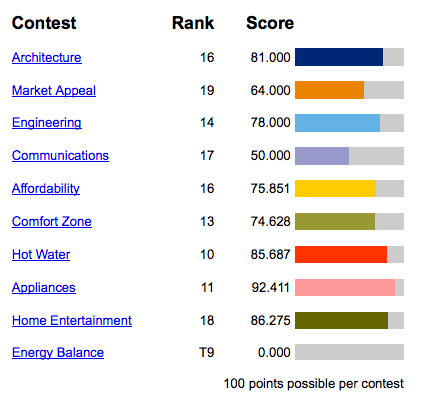