The graceful curve and shape of the home was inspired by the teepee. Solar panels arc toward the sun in a home that was designed for Aboriginal peoples in Canada.  It is the joint effort of the University of Calgary and the Council of 7 Tribes for the 2011 Solar Decathlon. Called TRTL (pronounced “turtle”) for Technological Residence, Traditional Living, the solar paneled house fuses the latest technology with traditional philosophies and practical living needs. 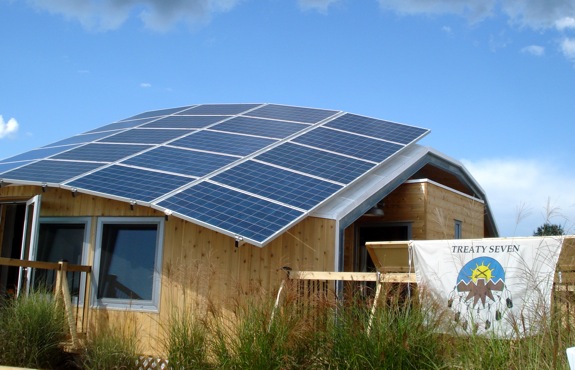 This Solar Decathlon home was a joint effort between the University of Calgary and the First Nations of Treaty 7.

Drawing inspiration from their surrounding environments, each Solar Decathlon team has sought to improve housing by building a better home that draws its energy from the sun. The beauty of the Solar Decathlon homes is that the universities have created homes that seek to fill a void within different market niches. 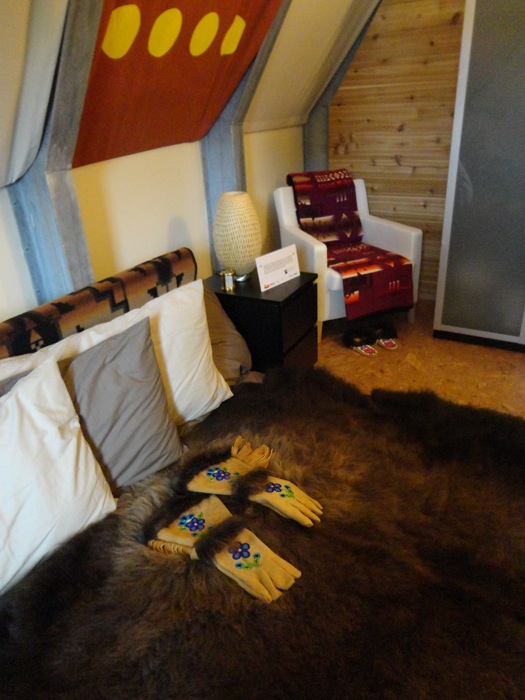 The home was designed and built by the University of Calgary.

This project addresses a segment of the market has often been ignored. The housing market is not often guided by a desire to incorporate the philosophy of Native Aboriginal Peoples and combine it with the latest solar technology.  Home efficiency and Native American realities have not been meaningfully addressed, – until now.

While Native Aboriginal Peoples do not comprise a large segment of the overall housing market, there are 3.5 million living throughout the United States and Canada.

There are hundreds, if not thousands of different Native American tribes that comprise a great diversity within different languages and cultures.   The TRTL project sought to address the design and build needs of the Blackfoot tribes that make up the Council of 7 Tribes.

The movable residence was designed and built to take many issues into account.  It is both fire and mold resistant.

I had the pleasure of speaking with Dr. Reg Crowshoe, who consulted with the architecture department in the design and build of the home. 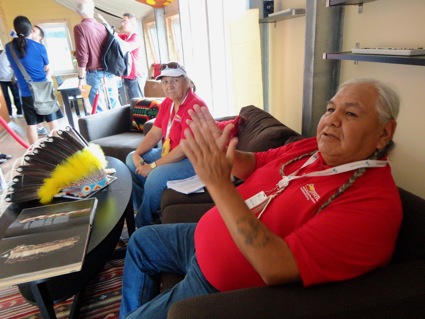 He explained that the home was built on stilts and is practical for those who live further north on the muskeg.

The muskeg refers to a peat bog, moisture-rich landscape found in northern climates.  It contracts and expands as it goes through the cycle of freezing and thawing.

The nature of the home being movable also helps with the concept of home ownership.

Native Aboriginal Peoples who used to take tremendous pride in living closely with the environment, have had a more difficult time with the philosophical concepts of permanence and ownership. In addition, permanent homes are not possible on many reservations. 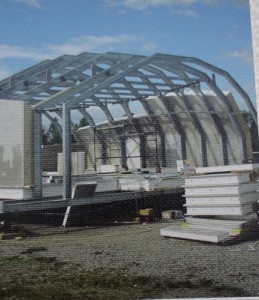 Mag SIPs were placed on a metal frame.

The TRTL home and its relationship to the earth is one that is movable, that enables the home to be passed to other family members who can move the home to a different area, while the land remains in tribal possession.

In this way, the home becomes something that has the family can take responsibility for and take pride in its ownership.

The home was designed and built to be practical, efficient and address different issues. Instead of being framed in wood, the structure is made of magnesium-oxide SIPs (structurally insulated panels) wrapped around a metal frame. Having an R-40 value, this type of SIP is a non-organic compound that does not burn and is resistant to mold.

In addition to being high tech, the home is equipped with all the modern conveniences.

The gleaming kitchen below is seen from the point of view of sitting at the dining room table.  There is also loft space above the kitchen that can be utilized. 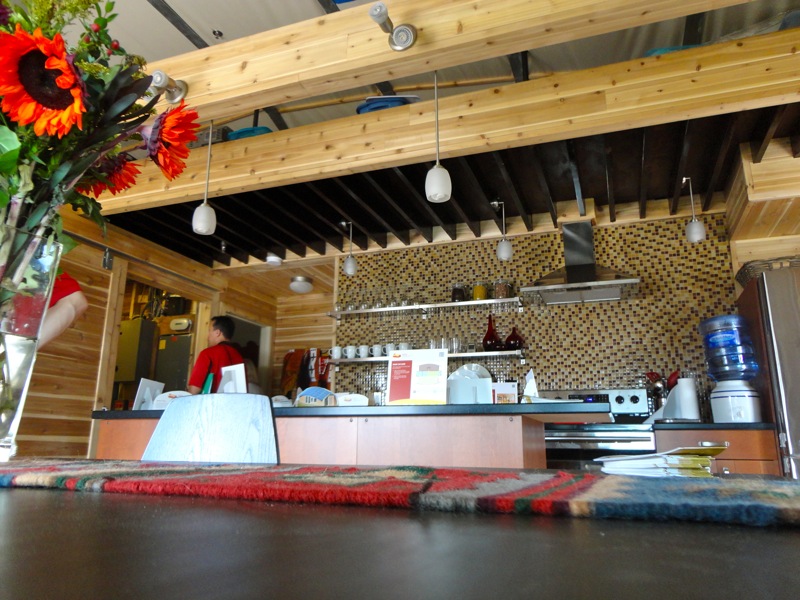 The modern kitchen is tiled with all the conveniences that a household needs. 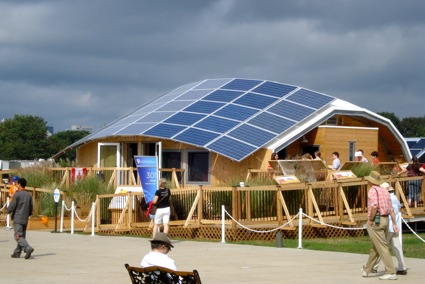 The home’s main entry faces the east. A line of people waiting to enter and tour the home can be seen at the right hand side of the picture.

Many different philosophical aspects have also been taken into account.  A traditional home’s entry must face the rising sun and is always located on the eastern side of the home.

Being well insulated, movable and solar powered are important facets of a home when approximately 10% of the population lives in remote off-grid areas.

The ability to both live comfortably with modern comforts is based off of the ability to have solar-based electricity. 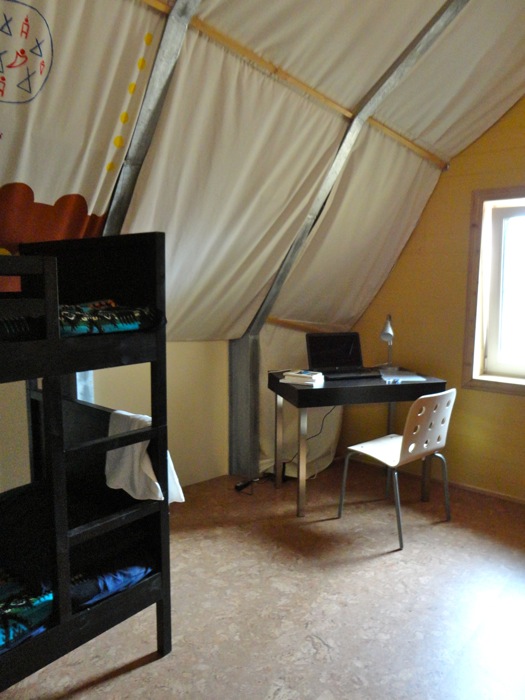 The view into one of the bedrooms, this one located on the north west side of the home.

There are many other attractive attributes with TRTL.

The corkwood flooring throughout the home is durable, easy to clean, yet provides a cushion underfoot.

Sliding doors throughout the home both save space, and also are reminiscent of the the flap of skin that can act as a door on the teepee.

As an aside, in speaking with Dr. Crowshoe, I found out that his tribe has a wind farm that sells electricity to the main power grid. I found this fascinating and in stark contrast to the many U.S. tribes located in New Mexico, Arizona and Colorado, that make money by either selling off natural resources to mining companies or by operating a gambling casino.

The team from the University of Calgary designed and built a noteworthy Solar Decathlon home.   It was estimated that this home could be built for $286,000.

The photo gallery and video below give more information about the TRTL Solar Decathlon home. 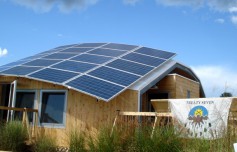 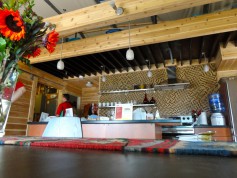 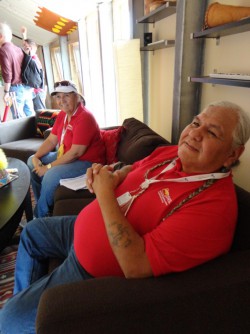 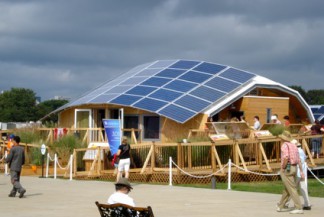 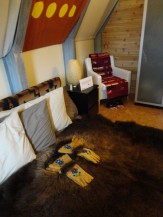 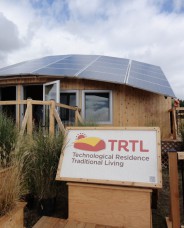 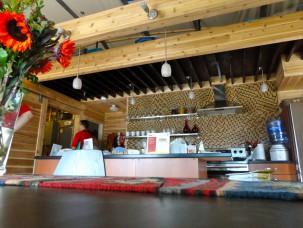 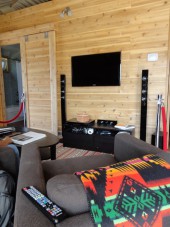 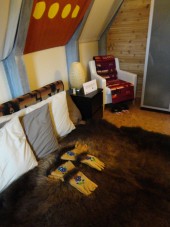 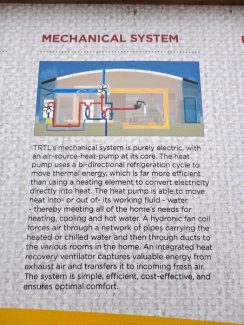 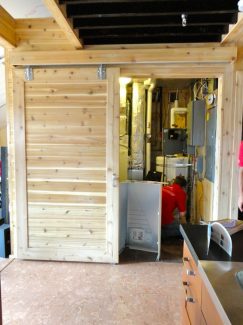 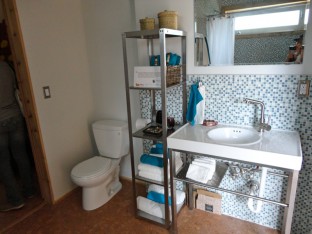 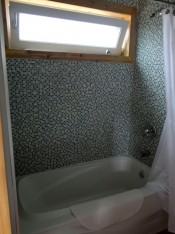 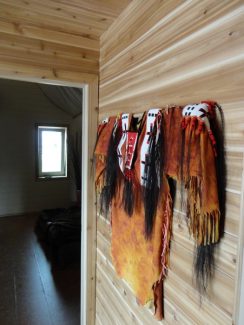 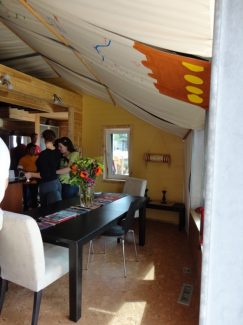 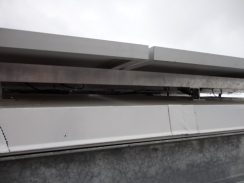 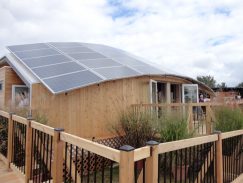 Kudos to the Solar Decathlon team from the University of Calgary who designed and built a home for a market segment that is much needed, yet typically under-served. 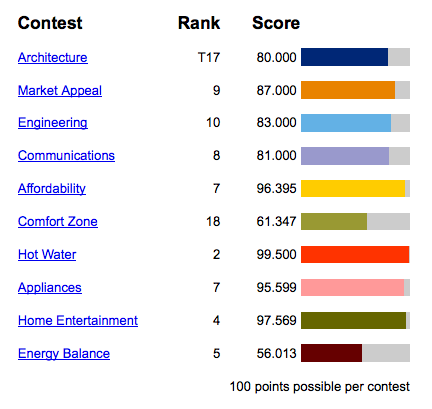 They received 2nd and 4th in the categories of Hot Water and Entertainment, respectively, and finished in 10 place overall for their second Decathlon effort.

See the video below for more information on the Solar Decathlon home.

The original model of TRTL that was submitted for the Solar Decathlon.

Check out the University of Calgary’s website to learn more about the TRTL project: solardecathlon.ca