Using Strawbale, Adobe and Recycled Rubble to Rebuild in Haiti

After the devastating earthquakes in Haiti, many people and organizations went to Haiti to help with the rebuilding of the country.  This strawbale home was built by Builders Without Borders using techniques that utilized both natural materials, mainly in the form of strawbale and adobe mud plasters, as well as other resources that were readily available. 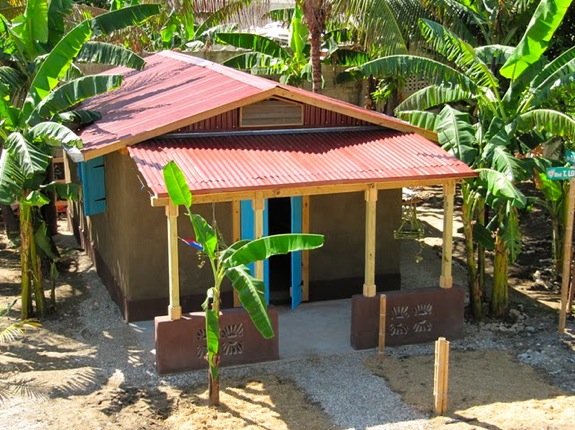 This Strawbale house was built in Haiti shortly after the earthquake of January 2011.

The project sought to work with natural building materials while simultaneously training Haitians to rebuild their country using materials that continue to be easily accessible.

The house consists mainly of strawbales, as well as recycled rubble and pellets, for the base and roof trusses, respectively. Corrugated steel was used for the roof, while the rest of the structure was covered with various adobe mixtures.

I recently spoke with Martin Hammer, an architect based out of Berkeley, California, who is a team leader with Builders without Borders.  He and his team built the lovely the strawbale house seen above.

Soon after the devastating earthquake in Haiti in January 2010, Hammer went to Haiti to build a strawbale home project called “Ti Kay Pay”.

Hammer has been working with strawbale buildings for almost two decades. 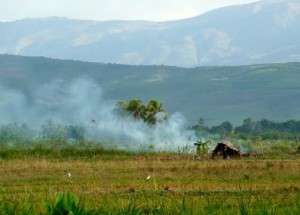 Straw is typically burnt in the fields after being harvested.

The walls of the home were built from strawbales.

Straw is a material that is plentiful in many parts of the world and is a renewable resource that results from the harvest of wheat, rice, barley, oats, or other grains that have stalks that remain in the fields after the tops has been harvested.

The stalk is often looked upon as a waste material and typically burned.

As rice is grown and harvested, straw is readily available in Haiti. The picture to the right shows the excess straw from rice being burned. 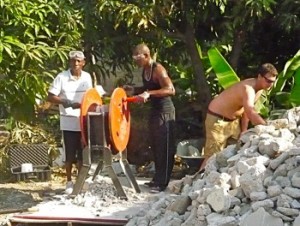 Rubble resulting from the earthquake was first crushed.

Because Haiti was recovering from a devastating earthquake and is located in a hot, tropical climate, the main priorities of the house were to build with easily available materials, to build a strong structure that wouldn’t cause harm to the occupants in the case of another earthquake, and one that would stay cool in the tropical climate.

To one of those ends, this building project utilized the abundance of concrete rubble that resulted from the earthquake.

The rubble was first crushed to obtain a size that was desired and used throughout the building of the home. 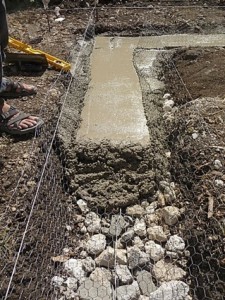 Rubble was crushed for the base of the rubble trench.

The crushed rubble was first used as the base of the foundation, then covered by a fresh layer of concrete.

The rubble was used again in recycled tarp bags. 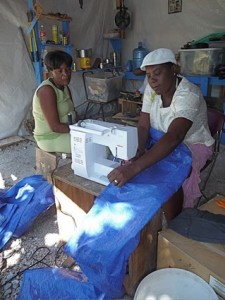 Tarps were readily available after the earthquake. They were sewn and reused as rubble bags. 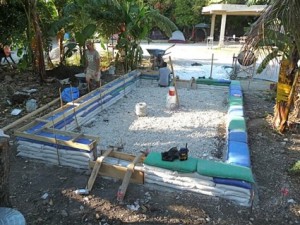 The tarp bags were filled with crushed rubble and stacked to make the base for the building.

Continue on to Page 2 – Building the Strawbale Walls and Roof

Adobe plasters were used over the strawbale walls, covered by roof trusses made from recycled shipping pallets.