Using Strawbale, Adobe and Recycled Rubble to Rebuild in Haiti 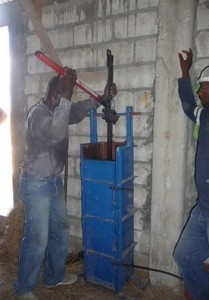 The straw must be dry and tightly compressed to build a house.

The next step in the process was the strawbale wall.

Gathered after the harvest of rice, straw is material that is plentiful to the area.

When building a strawbale house, it is important that the straw is dry and tightly compressed.  They used a ratcheted compressor to create the  bales.

Notice the building’s construction that houses the compressor.  It was built in the typical building style of the 1900s; a cement block building, with a cement roof – which was part of the reason why so many lives were lost in the earthquake. 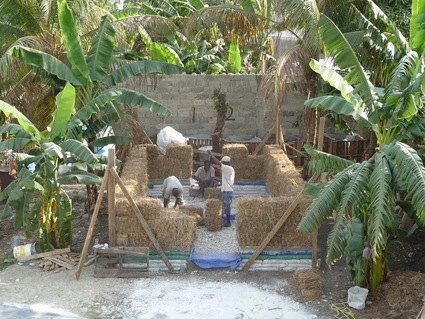 The strawbale walls being constructed.

Strawbale is built in a similar stacked manner as concrete block buildings, however, the very nature of the material and the building system are different.

If and when a strawbale building falls, it does not give off toxic fumes nor does it have the weight that concrete has.

This type of building is also perceived in a radically different way than a cement block building is.

In recent times, society has had the tendency to view straw not as a viable building resource, but as something to burn in fields or to use as bedding material for livestock.  This mindset is slowly changing with the prevalence of these types of projects.

Many people are turning to strawbale as an alternative and sustainable method of building.  Here’s another strawbale home located in Colorado. 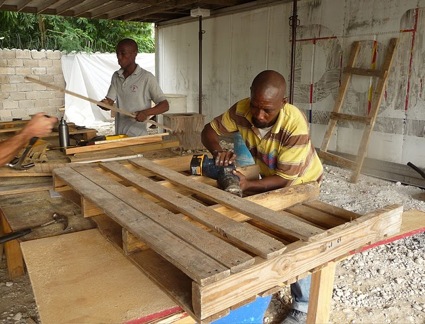 Pallets were recycled to build the roof trusses.

In Haiti, the building continued on the Ti Pay Kay project.

Utilizing another readily available material, the pallets that were used to bring supplies to Haiti, the pallets were disassembled and the wood was reused to build the trusses for the roof.

The roof is an important and strategic part in the building of a strawbale house.

The roof must be quickly placed over the strawbales to keep them dry.  If the strawbales get wet, they risk becoming harbors of mold and should not be used for constructing a strawbale building. 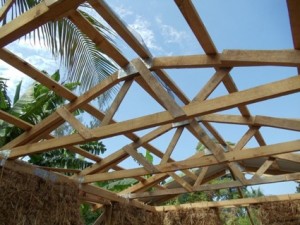 The roof trusses, built from the recycled pallets 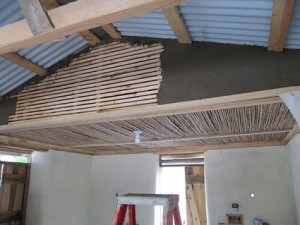 To help keep the building cool, lather and adobe plaster were used. 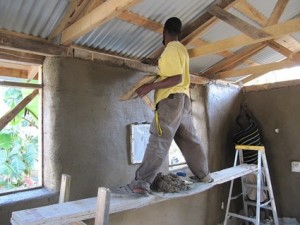 An earthen plaster covered the strawbale on the inside of the house.

Adobe plasters were used to cover the strawbale on both the outer and inner walls of the building.

Typically a mixture of adobe (mud and water) is combined with lime to help make the outer layer more moisture semi-impermeable.

Care must be taken when designing a strawbale home to make sure that the roof lines of the home do not drain onto a strawbale wall.

In the straightforward design of this home, drainage onto the house shouldn’t be a problem, however, knowing which way the wind typically drives, or which way the weather arrives always helps in the design and building of any type of home. 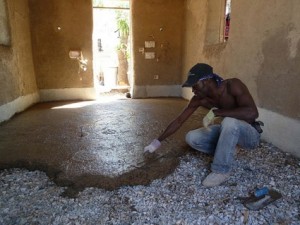 A adobe floor was placed over the crushed rubble.

The floor of the home is also made out of an adobe mixture.

Adobe floors are typically finished with a layer of Linseed oil that helps to seal it.  (See another home with an adobe floor.)

The use of adobe and earthen walls also helps to add thermal mass to the building.

Thermal mass is a material that seeks to stay a constant temperature.  When the home and its mass are shielded from absorbing the sun’s hot rays, the house will stay cool in hot, tropical area.  This is an example of passive solar cooling.  While the home sits passively where it was constructed, based upon the materials that were used and its orientation, it will naturally passively be cooler than a similarly built concrete block building. 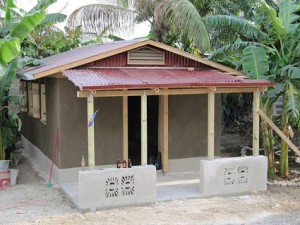 Porch - Galeri added to the front of the home

The building was designed on the traditional countryside, two room ‘galeri’ house that includes a covered porch.

The covered porch provides a place to socialize or simply enjoy the tropical breeze.

The strawbale home, while comparable to concrete block houses, performs better, being more comfortable (cooler in the hot climate) while it also performed better under seismic tests, being more flexible and not as brittle as a concrete block building.

Strawbale continues to build its reputation as an alternative, sustainable, reliable building material. 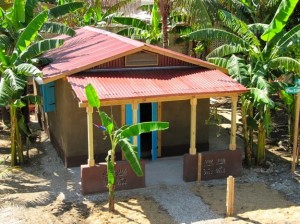 The finished strawbale project from Builders without Borders.

To learn more about Builders without Borders, visit their website: builderswithoutborders.org.

To see the complete photo gallery of the build, head over to the see the building progressing in Haiti.

All the photos in this post were taken by Martin Hammer. Thank you for the use of them in this post.