Fast, Sleek and Electric – The Roadster Car from Tesla Motors

It was after nightfall as I walked down the sidewalk when a glistening bright red car caught my eye.  Being in Washington D.C. for the 2011 Solar Decathlon, like a kid in a candy store, I instantly salivate at the sight of shiny, new, technological gadgets. 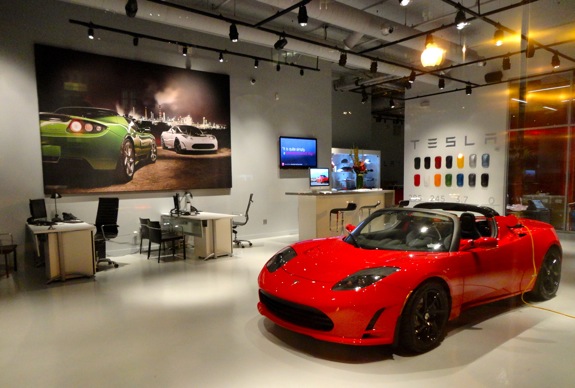 The Tesla Motors Showroom – almost like Candyland for adults

I went back to Tesla Motors during the day to find out more about the eye-catching electric car and learned a few things.

But it runs differently than what we are used to,  thus a paradigm shift is needed to understand how this car works.  (The car can be powered off of solar electricity.  See below.) 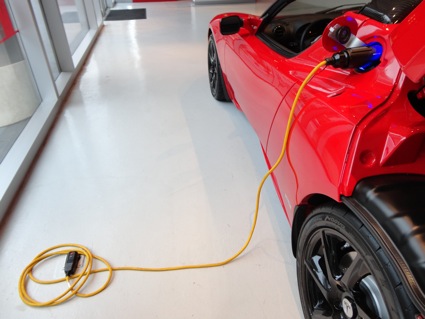 This car gets its energy from a flow of electrons

Instead of pulling up to a gas station to fuel up, the car needs to be plugged into a source of electricity.

The idea of plugging a roadworthy car into an electrical outlet was difficult for me to comprehend as my mind tried to conceptualize how electricity could feasibly propel a car forward.  Initially it seemed like childsplay, but what I found was a highly technologically advanced driving machine. 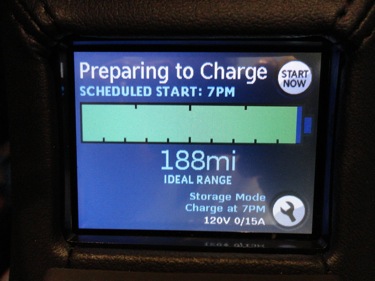 Instead of a fuel gauge, a battery screen displays the miles left.

As I sat behind the steering wheel, instead of seeing a fuel indicator, a screen showed me the status of the battery and the range of miles that was currently available.

Instead of running out of gas, the car would potentially run out of electricity. It’s such a novel idea – to travel and be propelled, not by gasoline, but electricity.

The overall goal of any type of vehicle is to achieve forward motion.

Both an electric and petroleum powered car will achieve this end but through different means.

To understand how this works, let’s compare what an electric car does and look at the traditional means of powering a vehicle with a combustion engine. 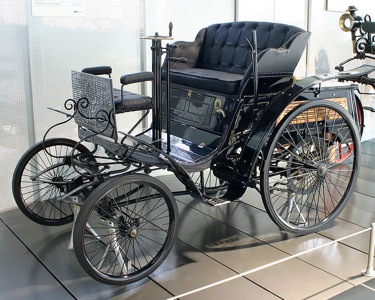 Let’s start with the combustion engine that we are most familiar with.

An internal combustion vehicle uses a type of gasoline as its energy source.  It is stored in the gas tank and travels through the motor to propel the car.

In the motor that serves as the engine of the car, the chemical energy is converted to thermal energy through the process of combustion.  It becomes mechanical energy and propels the car. 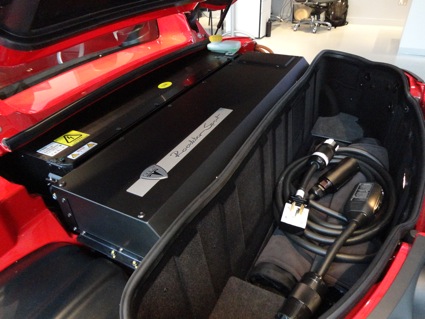 Instead of filling up with gasoline, the car is changed with power.

The electric car is similar, but utilizes and stores energy differently.

The main difference between the two vehicles is that the electric car utilizes a flow of electrons, or electricity, as its energy source.  The chemical energy is stored in a sealed lithium iron battery, then converts it to electrical energy when supplied to the electric motor.

In the motor, the electrical energy converts to mechanical energy and in this way, the car moves forward.

A full battery charge will typicaly get a Roadster 245 miles.

The battery is generally good for 7 years or 100,000 miles before it needs to be replaced.

Let’s think about the utility of vehicles.  What is a vehicle typically used for?  Across the world it is the same: getting to and from work.  The average commute in the United States is said to be under 35 miles.  An electric car would work for most households.  Owners of electric cars say that they simply plug in the car at work or after getting home and have ample power to spare. 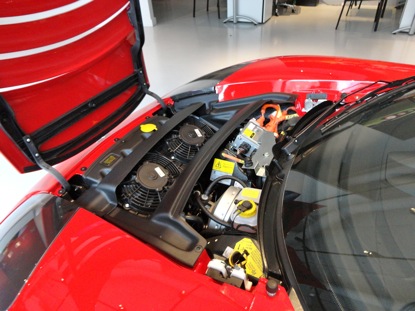 While the car was awe inspiring, I tend to be a skeptic and reel against the promotional slogan of ‘zero-emissions’ since I find it logically problematic as the production of electricity occurs primarily through natural gas (excuse my language – fracking sucks) or through nuclear or coal-fired electricity plants.

While renewable energy from wind and solar plants are viable alternatives, they have not yet become a widespread phenomenon. The state of California is the closest, with 13.9% of its electricity coming from renewable energy sources that include solar, wind and small hydro.

Because every state is different and creates elecricity from many different sources, it’s hard to quantify the actual emissions of an electric car.

A Tesla Electric Car Can Be Powered By Solar

Any electrical car can be powered by solar.  One inquisitive mind found that his Tesla Roadster could be powered purely from solar-based electricity. 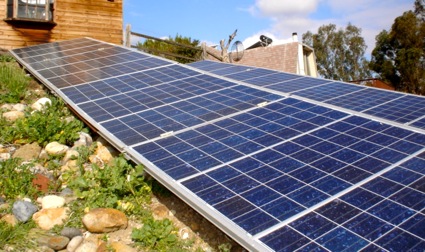 After installing solar panels for this home, Dr. Rob Wilder added another array of panels to see if they would power his Tesla car.

He found that by relying on an 8 kW array of solar panels for electricity, the sun could produce 24 kW per day – which equated to 72 miles per day per battery change for his Telsa Roadster solely from energy from the sun.

Find out more about his PV + EV Solar electricity driven Tesla test by reading about his experience directly.  (He also refers to comparative sports cars like the Porsch or BMW as ‘slow’ in comparison to the 100% torque of the electric Roadster.)

A Photo Gallery of the Tesla Roadster taken at their dealership in Washington D.C. 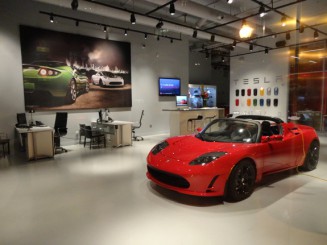 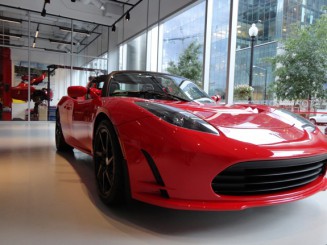 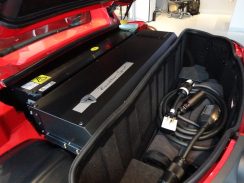 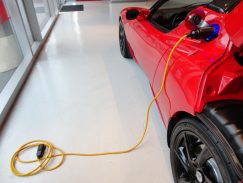 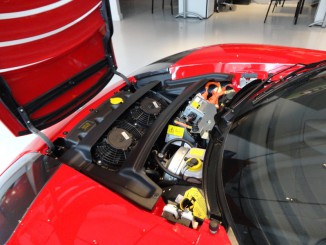 I contacted the Tesla dealership in Colorado for a test drive but alas, they are saving the last couple dozen or so Roadsters for serious buyers.

The Roadster starts at $125,000.  Tesla Motors will soon be releasing a Model S sedan that will be available and targeted toward the general public.  With the potential to seat four, the S is the more moderately priced model, reported to cost around $50,000.