This passive solar home was submitted by Brian Knight of Springtime Homes.  It is an efficient, passive and active solar home with 3 bedrooms and 2 bathrooms. 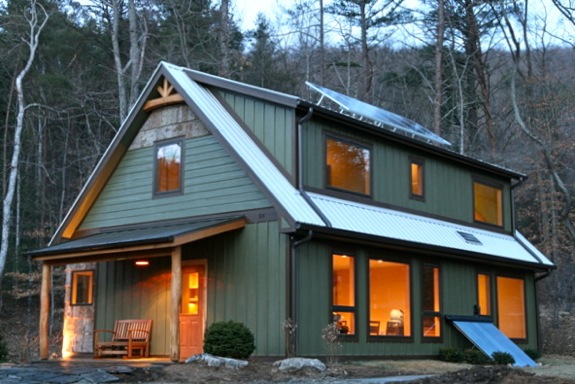 Constructed with SIPs (Structured Insulated Panels) it boasts a HERS rating of 47, making it an efficient home with a tightly insulated envelope. 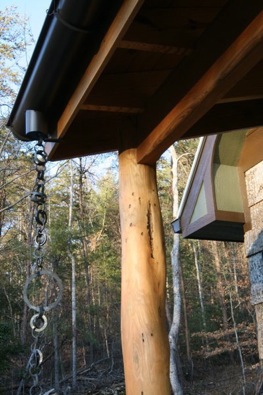 Two different, but similar homes were submitted for this article.  Both were designed and built by Brian Knight and his company Springtime Homes of Asheville, North Carolina.

Custom built homes tend to have more artistic, whimsical features and are often more solidly built.  The porch is supported by logs shaped by hand, with an metalic rain drain off to the side.

The homes also have classic passive solar design. Most of the windows are on the southern facing side of the structure and the roof incorporates a small overhang that blocks the summer sun’s heat from entering the home.   The home has a ratio of 10% southern facing glass to square foot of thermal mass. Concrete floors, the heat absorbing material with thermal mass, were poured on the lower floor. 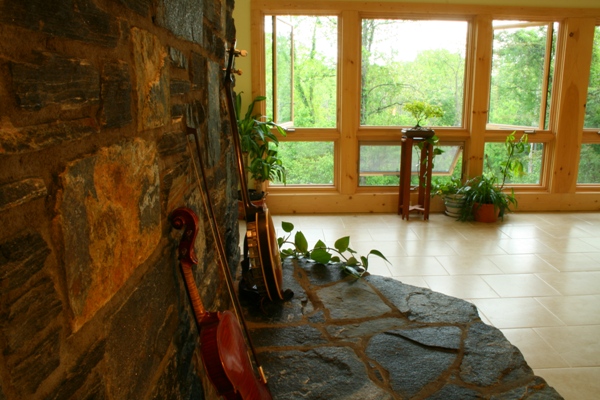 The tiled front room serves as an area with thermal mass on the southern facing side of the house. Photo from other one of Brian’s building project.

Because windows on the other non-south facing sides of the home were minimized, they incorporated the used of triple glazed windows on them to help minimize heat loss and keep the home well insulated.

They used both fixed and operable windows.  The use of fixed windows often reduces the overall cost of the window, while it also cuts down on air infiltration and thermal bridging.  Because some of the windows are operable, air flow through the house can be created when desired.

The south wall of the home was also designed with areas of solid, windowless areas to avoid over-engineering the build. 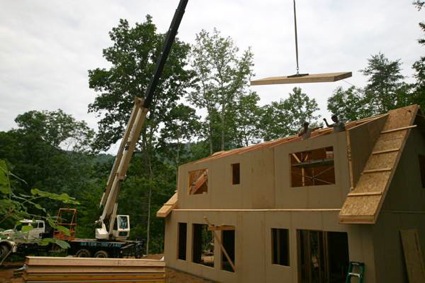 SIPs were used in the construction of the passive solar homes.

In order to build a tight housing envelope, Polyurethane SIPs from Eco-Panels were used.

SIPs are constructed off site, to the builder’s specifications.  They are structurally very strong and each panel is a continuous slab of insulation.

As can be seen in the photo, SIPs are preconstructed panels that can quickly be put into place in a matter or days.

The type of insulation used in a SIP can vary and can include styrene, polyurethane or even straw.

Polyurethane SIPs are said to have twice the R-value of a styrene, and thus reduces the potential for thermal bridging (the ability for cold or heat to move between and across surfaces).

When building with SIPSs it’s important to remember to seal all gaps, as well as tape interior and exterior joints.  (In our area in cold Colorado, it’s also important to seal the wire and electrical chases.) 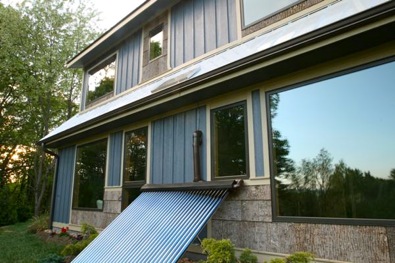 The south side of the home also has solar evacuated tubes to help heat the house.

There is a 1 KW solar panel on the roof to supply the grid-tied home with electricity.

There is a smaller PV panel on the lower roof located above the thermal tubes that is dedicated to the El-Sid DC pump which circulates the glycol anti-freeze mixture in the evacuated solar thermal tubes.

When the builder was questioned about this, he replied that there were –

Lots of advantages for this. It’s been proven that circulation pumps attached to a home’s AC power supply are HUGE parasitic loads which reduce the payback time of SHW by many years.

It simplifies the installation and reduces commissioning problems because a separate controller (and thermistors, wires) are not required to tell the pump when to turn on and shut off. If the sun is bright enough to heat the water, it’s also providing enough power to circulate the fluid so it’s more of a passive system. DC pumps, especially the EL-Sid are known to have a much longer life than AC pumps. The home is on city water so if there is a power outage, the home will still have warm water if the sun is out. 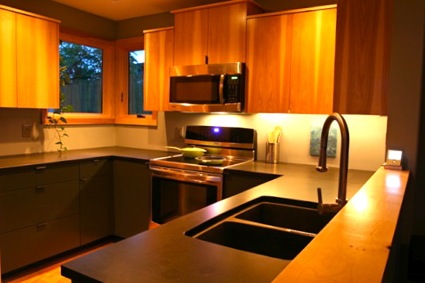 A view inside of the kitchen of the passive solar home.

Our society has become accustomed to having the luxuries of hot water and heated homes, yet as energy demands on grids rise, is has become more commonplace to have power outages due to too much demand or from weather wreaking havoc on power lines.

Homes that have solar-based backup systems installed will have these luxuries even when the electrical grid system fails.  These systems simply need to be built with other aspects to help them function efficiently.

Every home that uses solar thermal tubes will have something known as the heat dump.  This is the place where, if the system has more heat than is required by its settings, the heat dump is the location where the excess heat is discharged. 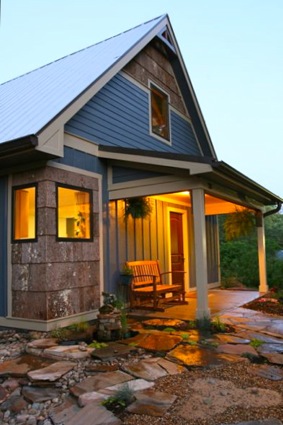 Sometimes it is a place like a garage that is not a conditioned living space as in this other build, but in this home it is located next to the storage tank directly behind the collector under the stairs.

According to the builder, “This is only a 10′ run which is very short and helps to reduce the cost of the system and increase its efficiency.”

It is impressive and encouraging to learn about efficient passive/active solar homes being built around the country.

The photos were all courtesy of Brian Knight.  He designed and contracted to build the homes.  He is also available to consult on energy efficient building projects.

Learn more about his company by visiting his website accessible below.

Springtime Homes is a custom home building company based out of Asheville, North Carolina.