The Significance of the Winter Solstice 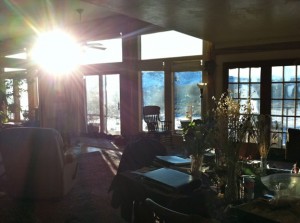 The sun travels a short, low arc across the sky in the winter. It is at its lowest arc on the winter solstice.

Today is December 21st, the day of the winter solstice.  It is the shortest day of the year in terms of daylight as the sun ‘travels’ its lowest and shortest arc through the sky*.

In terms of passive solar architecture, it is a day when the sun will potentially reach the deepest sections of a building or home. If a house is built in an area where solar heating is desired in the winter and if it has been built in a way to harness the sun, the passive solar homeowners in those homes are rejoicing in a warm dwelling where they pay little or no utility bills.

The picture below shows the winter sun reaching deep into a passive solar house.  The home is built out of recycled tires as a modified Earthship and was reviewed in an earlier article. 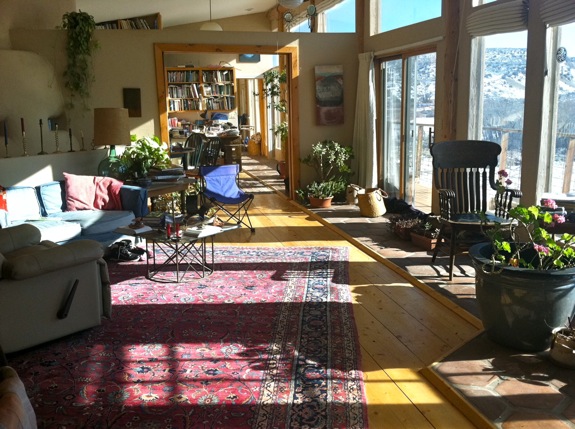 The sun shines deep into a passive solar house, warming it on a cold, snowy winter day. 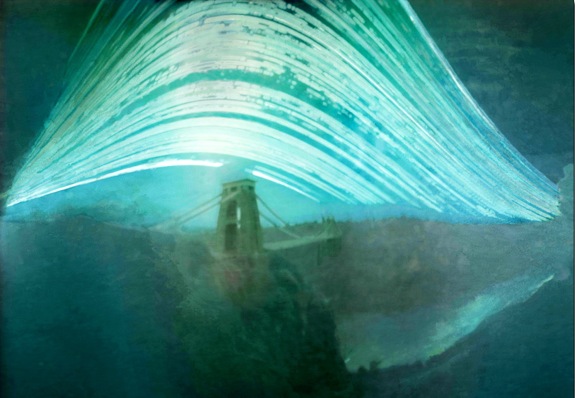 The photo shows the sun’s travel throughout the sky, by Justin Quinnell. Click the picture to go to his website.

Pinhole photography artist Justin Quinnell strapped a camera to a telephone pole and recorded the sun’s movements from December 17, 2007, to June 21st, 2008.

Passive solar houses work with the sun and its cycles.

If a house is situated to work with the sun, it will be more efficient just by the nature of the direction it is facing the the materials that it is made out of.  Building in this way is called ‘passive solar’.

Passive solar housing works together with the sun and its seasons so that a house is warm in the winter and cool in the summer.

The ground level of the home has materials with thermal mass in a concrete floor and walls made out of recycled tires filled with dirt.  The homeowner exclaimed, “The wall is warm.  It’s works!”

Just by situating a house a certain way (facing the south in the northern hemisphere) and using certain materials (windows and materials with thermal mass) will allow the house to absorb solar heat as it shines into the house in the winter as the sun travels a shallow, short and low arc across the sky.

In the summer when the sun travels a long, high path across the sky, if a correct overhang is built on the house, the sun’s heat will be blocked from entering the house.  The Anasazi built cliff houses in this manner hundreds of years ago, while innovative people interested in passive solar housing are doing the same today.

There are more reasons to celebrate.

The winter solstice also marks the official start of winter, yet it is also the beginning of the days becoming ‘longer’ with more daylight hours.  Yay!

Here’s a passive/active solar grid-tied home and a passive solar home with a Trombe wall. Both are warm and toasty while we currently have snow on the ground this first day of winter.

(*In actuality, the Earth and all its occupants are rotating around the sun.  The sun simply appears to travel across the sky.)