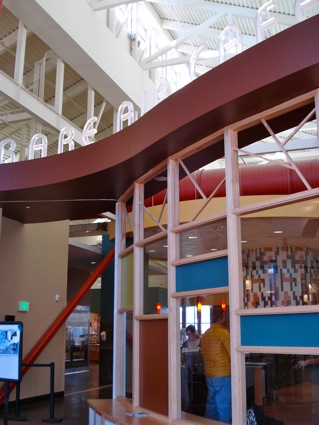 This article was reprinted with additions, due to the fabulous nature of the many implementations that continue to take place at the Rare Air Cafe at Western State College under General Manager Jon Coady.

– We all do it. Eating is a basic (and pleasurable) function of all living things.

When the production of food is prepared and consumed on a massive scale, as in cafeterias, the amount of potential waste can increase exponentially.

Using a streamlined approach to efficiency, combined with teamwork across different organizations, the Rare Air Cafe at Western State College in Gunnison, Colorado has reduced its waste output by 90%.

After successfully restarting cafeteria service after the redesign, they have continued toward sustainable operations by utilizing natural relationships and seeking out locally produced food.

The article below outlines steps that the college is taking to cut down on waste, while their GM, Jon Coady, continues drill down inefficiencies. 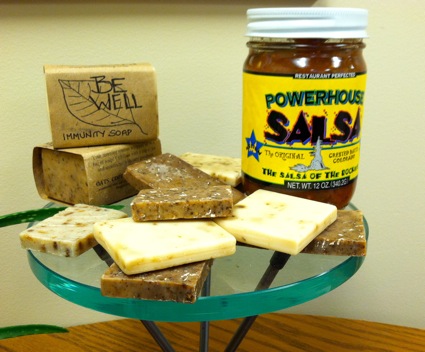 The soap was originally waste oil left over from the fryer. Now it’s lovely soap!

I recently asked him why he has soap and salsa on a stand in his office.

Coady explained that the cafeteria recently started a partnership with Crested Butte locals who take the waste oil resulting from frying french fries and resell it to others that utilize it.  One of the companies that reuses the oil is the Be Well soapmaker in Breckenridge.  For those that are unfamiliar with Colorado, Be Well is essentially located on the other side of the mountains.

This also saves the cafeteria from having to pay in order to dispose of the waste oil. Instead of being dumped, it is recycled into fabulous soap; keeping the materials locally sourced.

Coady is also utilizing locally made foods to help supply the cafeteria and keep the college students healthy. In this case, Powerhouse Salsa is made in Crested Butte, 28 miles north of Gunnison.

These sustainability-smarts doesn’t stop with these recent additions.  Read on for how they redesigned the Rare Air Cafe to cut their waste by 90%. 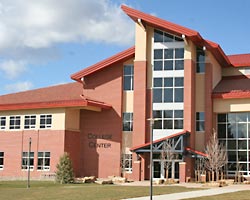 The Rare Air Cafe is tucked away in the newly built, LEED certified building in the College Center.

The cafeteria was redesigned using a philosophy on efficiency that looked at how food is served and what is done after it is served, in order to cut down dramatically on levels of resulting waste. The design of the cafeteria incorporated rounded serving counters, that also increased the surface area available to serve food.

The Rare Air Cafe features different ‘island’ sections of food groupings. This helps to cut down on lines and breaks away from the formal line-and-tray cafeteria syndrome.

Speaking of serving trays, the cafeteria has gone ‘trayless’. It is a typical cafeteria where a person can eat as much as one wants within one sitting. Yet this typical cafeteria-style of eating can have a nasty aftereffect, adding unwanted inches to a waistline, while also creating inefficiency and waste. 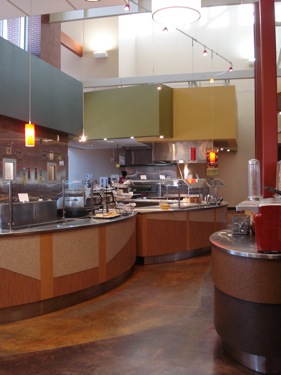 I admit it. I am one of those people that will pile on as much food as possible onto whatever surface that I am given.

I enjoy eating. There have been a few times times when I’ve taken more than I can eat. The lack of serving trays has cut down on the overall amount of food that is taken to the tables. Less food to the tables = less waste. I admit that have tried to pile as much as possible onto a plate, yet I’ve never left feeling hungry.

With the cooperation of the Sodexo Campus Food services, led by General Manager Jon Coady, Head of Catering Chuck Batemen, Head Chef Bill Watkins and the newly formed Sustainability Club at Western State College, the food preparation, service, and resulting waste products, has become an efficient large scale food serving process. This process incorporates recycling, composting and the use of a food pulper and water extractor. In order to appreciate the 90% reduction, we look back to the old practices. 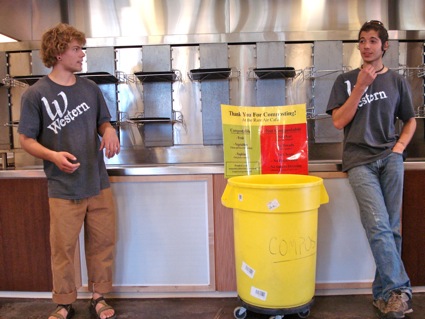 Previously at the old cafeteria, a large 6-8 yard dumpster needed to have its contents dumped twice a week.

In the new, revamped location, they currently have a smaller dumpster that is taken only once a week, thus the creation of less waste has cut down on their overall carbon footprint. (The garbage trucks no longer have to drive twice to the cafeteria to pick up and dispose of the extra waste.)

In the new location, when a cafeteria patron is finished, the plate and other service items are taken toward a rotating wall.

Before the plates, cups and silverware are placed on the trays heading to the kitchen, members of the Western State Sustainability Club have placed a yellow tub for students to place compostable items.

They created a sign to guide the process: items on the green side like fruits, vegetables and napkins are to be composted, while meats, dairy products and other non-compostable items are represented on the red side of the sign.

The rest of the waste is placed on the rotating wall which takes the used plates, silverware and everything else, back into the kitchen area. We’ll see what happens to that later in the article. 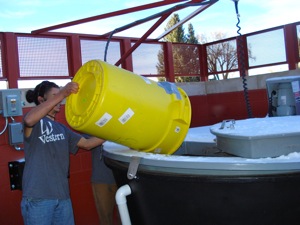 The compost is taken to the back of the facility and placed in a big compostable bin called ‘The Earth Tub’.


The Earth Tub is 9 feet in diameter and approximately 4 feet high and quite fragrant. This stinky mixture, however, will soon transform into a nutrient rich soil. 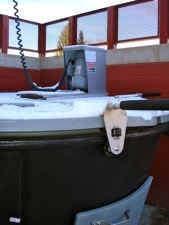 The process of transformation of decomposition is helped by an internal auger that allows the compost to be churned. The handles on the lid allow the auger to be spun through the composting mixture to further aid in the process.

After about a three month period, the composting will be complete. The nutrient rich soil will be shoveled out of the side hatch and will nourish the flowerbeds throughout campus.

Students from the Sustainability Club wrote the grant to acquire the funds for the composting Earth Tub. As for the noncompostable products, they take a different route. 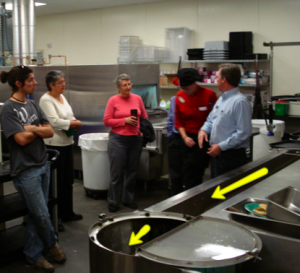 Jon explains how a food pulper grinds up larger pieces of food in the process of cutting down on waste levels.

The noncompostable items are sent back to the kitchen by being placed on one of the trays.  The trays are part of the slowly moving wall that take the plates, utensils and waste into the back of kitchen area.

Any remaining waste is scraped into the channel leading to the pulper.

The pulper is the round metal contraption located at the end of the channel. It has razor sharp metallic teeth in its bowels that grind up the larger items.

After getting pulverized, the waste material travels down a pipe to an extractor located on the basement level.

Any remaining water is extracted out of the food and the resulting mush is dropped into a waste tub. 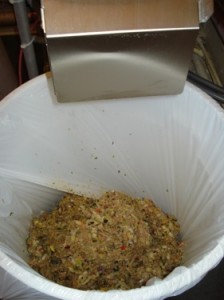 Waste material after going through a pulper, then after the water is extracted. This is all the waste left!

The resulting waste from this cafeteria serving system is fairly minimal.

Amazingly, this is the resulting amount after serving approximately 422 lunches. Cool eh?

This waste is placed into the the dumpster.

A 90 % drop in waste reduction at the cafeteria at Western State was accomplished through a combination of cooperation, skillful delivery, recycling, composting, utilizing a food pulper/ extractor and composting tub.

Students, faculty and other guests are happily fed, while the Rare Air Cafeteria has accomplished efficiency in the dramatic reduction of generated waste. 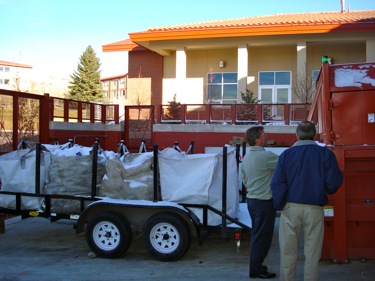 The recycling trailer and waste dumpster at the Cafeteria at WSC

The team at Western State College also actively recycles to help keep their pristine mountain areas clean.  Here’s a picture of the recycling trailer along with a small section of the dumpster that gets serviced once a week.

The picture was taken in November, so there is a dusting of snow on the dumpster and on the bin of plastic milk jugs destined for recycling.