One of the most poetic entries in the 2011 Solar Decathlon, Florida International University created the perFORM[D]ance House.  It also won 1st place in the Energy Balance category, producing as much or more energy than it needs. 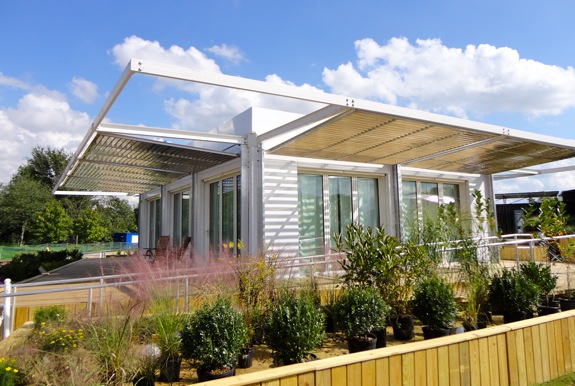 Florida International University designed a house that could protect itself during hurricane season.

It’s a house that would work in in any temperate, tropical area, not necessarily one that solely works in a hurricane zone, but it does have a protective covering that would do just that.

Features Outside the Home 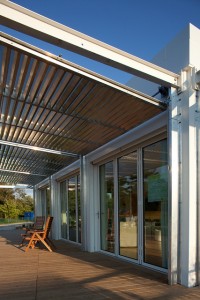 This is an ideal beach home for gazing at the ocean. Photo credit: Jim Tetro, DOE/Solar Decathlon

This house was designed for a coastal area, yet the prospects of having a home on the Florida coast comes with the looming danger of tropical storms.  With the increase of erratic weather, hurricanes are now commonplace in ideal beach-living areas.

The home can respond to these different environments with its protective shell that performs double duty: offering shade for the dwelling, as well as act as a type of armor that can be lowered to help protect the house against hurricane winds, the gale force winds and the objects that they carry.

A steel frame was attached to the house to guide the aluminum shades or louvers from an up or down position. 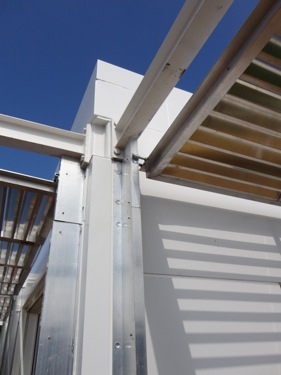 The metal louvers could be lowered to protect the house during nasty tropical storms.

When a storm alert arrives, the home owners can lower the shades, turn everything off and travel inland.

The home is not only built to protect itself against hurricane winds, but also one that won first place in the coveted Energy Balance category of the Solar Decathlon.  Winning this category means that the house produced as much or more energy than it used.

The Perform[D]ance home was also been designed for relaxation and the enjoyment of the surrounding views.  A lounging deck that surrounds the home on all four sides hints of a leisure days gazing at the ocean.

The deck also has a practical design aspect that helps to keep sand out of the house. It also inspires with poetic inscriptions. 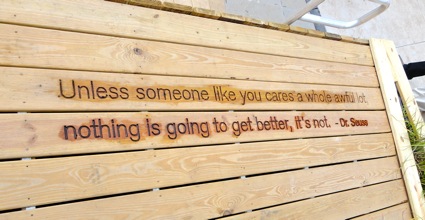 The deck surrounding the home had quotes that inspired efficient living.

Quotes from different visionaries have been etched into the deck.  The quotes encourage thinking and acting in a way that break from the conventional ways.

This is an amazing house that both renewable energy advocates and insurance companies would love.

Features Inside the Home 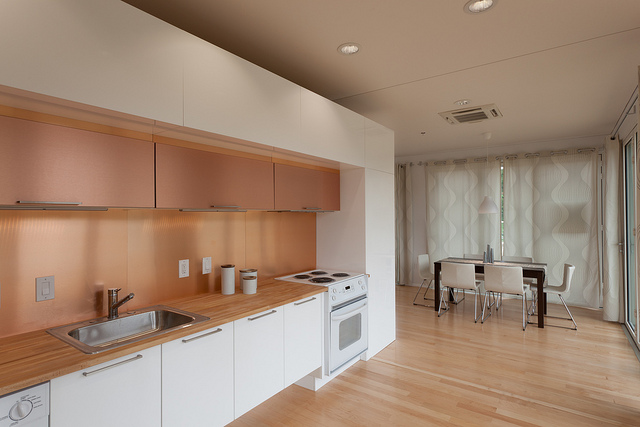 The home was designed with an open configuration, with the living areas arranged in a “U” shape around the mechanical core.

This type of configuration had the kitchen, living room, and bedroom areas wrapped around the bathroom and the other mechanical functions located within the core of the house.

The team from FIU built a Solar Decathlon home with an open configuration, with the utilities within the core.

The large windows on the east, north and west sides of the house all fully retract and create air flow across the house.

Natural light infused the living areas throughout the home. 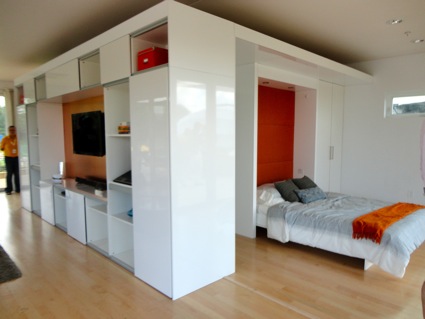 The bedroom was located around the corner from the living room area.

Around the corner from the living room and entertainment areas, was a bedroom area and access to the bath room.

The Murphy-style bed could be recessed neatly into the wall when not in use.

This allowed the area to transform into a multi-use area that could double as a study.  (See the photo below to see the transformation.)

The bathroom could be accessed by the doorway located to the left of the bedroom.

Taken from the northwest corner, a panorama sweep of the home shows the living room and the bedroom.

The living areas wrapped around the core, located in the middle of the house. 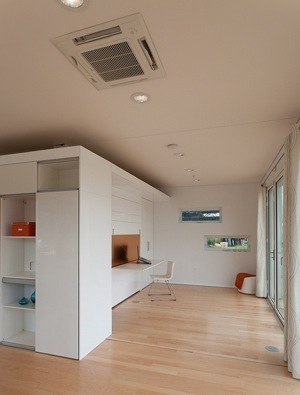 The Murphy bed has been put away, and a desk area is in its place. Photo credit: DOE/Solar Decathlon

Because this house was designed for a tropical climate without large temperature swings, the home does not feature any specific passive solar aspects for cooling or heating.

At 780 sq. feet, the one bedroom house seemed to have ample space for a couple or to serve as a beach retreat.

The large deck surrounding the house extends the living space to the outdoors.  Living next to the ocean, the great outdoors would be fun ever-changing room to enjoy. Imagine surfboards and kayaks stored away under the deck. 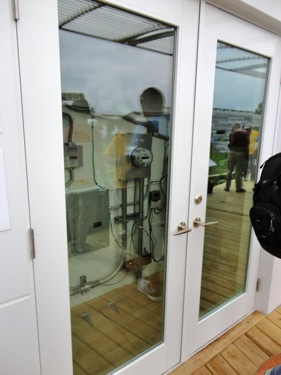 The utility room, located on the south side of the home.

The mechanical core was located inside the house, but could be accessed from outside. This also has a practical aspect that helps to protect the functions of the house from being damaged in a storm.

The Perform[D]ance Solar Decathlon house from Florida International University won 1st place in the Energy Balance category, producing as much or more energy than it needs. The FIU home finished in 11th place overall and was estimated to cost $368,000 to build.

Take a look at the photo gallery and video below to learn more about the Perform[D]ance Solar Decathlon home from Florida International University. 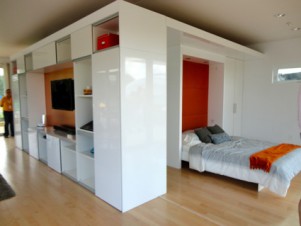 Florida Internation University designed a house that could protect itself during hurricane season.

The metal shutters could be lowered to protect the house during nasty tropical storms. 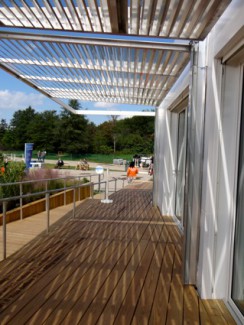 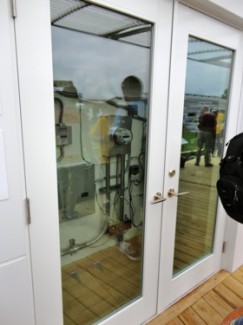 The utility room, located on the south side of the home. 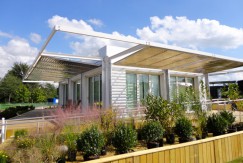 Florida Internation University designed a house that could protect itself during hurricane season. 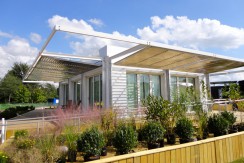 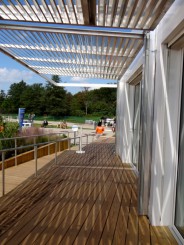 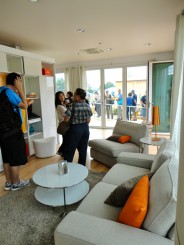 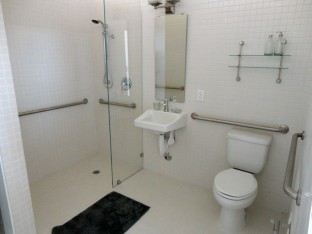 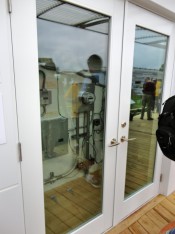 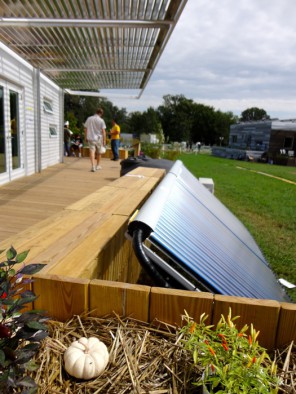 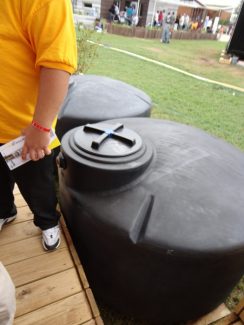 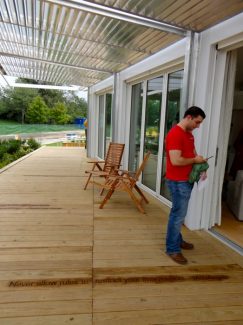 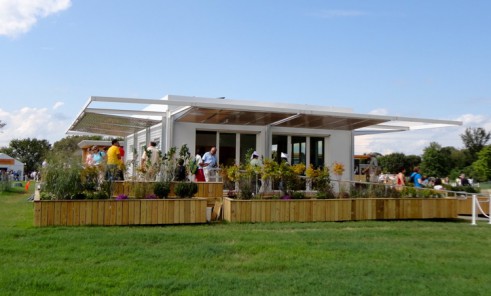 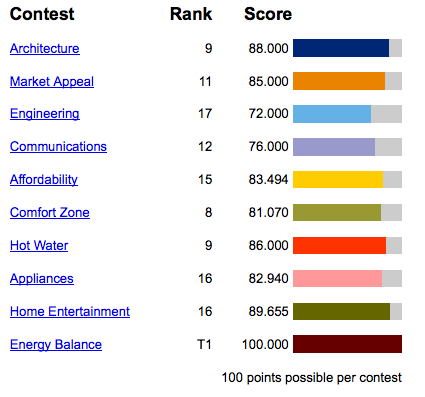 A screenshot of the overall scores from solardecathlon.gov

If I could give awards to houses, this would be the most poetic one, with the quotes etched into the deck.

See the model that was accepted into the Solar Decathlon.