The 4D Home allows a homeowner to move walls and create a more open or private space as desired. It’s also incredibly energy efficient. The Massachusetts College of Art and Design and the University of Massachusetts at Lowell combined their talents to create the 4D Home for the 2011 Solar Decathlon. 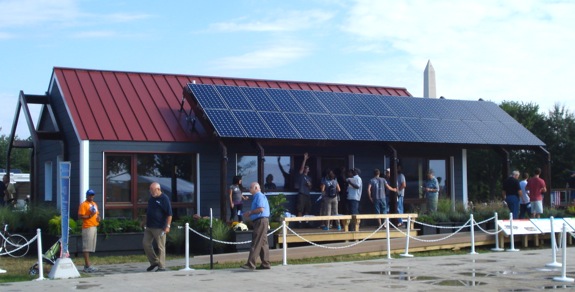 The Massachusetts College of Art and Design and the University of Massachusetts at Lowell made the 4D Home with moveable walls and solar efficiency.

The home gets its “4D” designation from the 4 dimensions of adaptability, affordability, energy efficiency and time. The fourth dimension of time held the idea to create a home would adapt to the changing seasons, as well as with the changes that occur within the family through time.

The 4D Home had a strong showing in the 2011 Solar Decathlon with a 2nd place finish in the Energy Balance category, proving their passive and active solar strategies to be working in symbiotic efficiency.

The team from Massachusetts realized that solar energy as a renewable energy source is the most efficient when energy use and overall electricity draw is minimized through passive strategies. This kernel of knowledge is one of the beauties of this team. 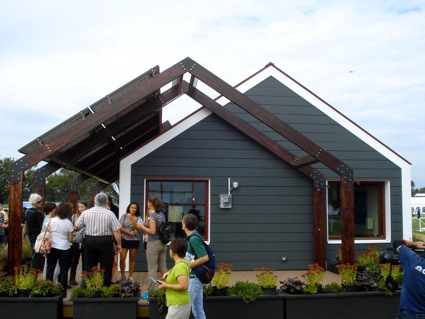 The solar panels are mounted on a frame and are detached from the home.

The solar panels were mounted on a frame and thus detached from the roof.

This type of solar photovoltaic (PV) panel installation has a few advantages.

It gives this home a passive solar aspect as the overhanging PV shades the porch while it also provides the home with efficient solar-based energy.

The way that the panels were installed also allows for air flow behind the panels that helps them to  dissipate heat. This facilitates the efficiency of the panels, as cooler solar panels operate more efficiently. (This was also found by people who built their own backing to solar panels.)

The team used 28 monocrystalline silica (E19 238) photovoltaic panels from SunPower that have a 19% efficiency. 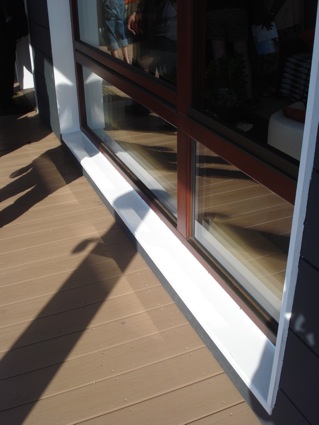 The solar panels block the summer sun from entering the home, keeping it cool while generating solar electricity.

The photo to the left was taken in the autumn, at a time when the sun does not travel as high in the sky as on the summer solstice.  One can observe how the overhang shades the home while blocking most of the sun from entering the home through its windows.

In the winter, as the sun travels a low path through the sky, the sun will enter and warm the house.

(See how the sun travels a different path through the sky in the summer and winter.)

This Solar Decathlon home was also unique because it combined both solar PV and thermal solar panels by using hybrid solar thermal panels. 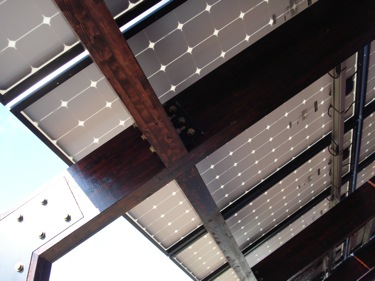 The team combined solar thermal and solar PV in the panels

Because they are combined in this fashion, the solar thermal also helps to cool the PV, helping it to operate even more efficiently.

The solar thermal aspect is the tube running under the PV on the right hand side of the picture.

The heated liquid in the solar thermal tube travels inside the house to a heat exchanger to supply hot water for the home.

Let’s travel inside to see the design of the home that lends to its name, the 4D Home. 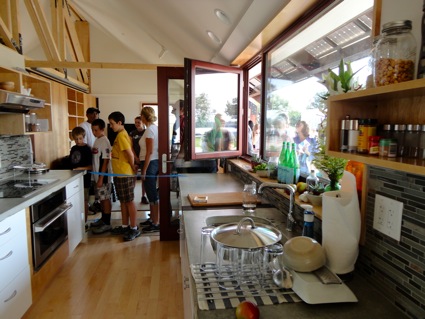 The kitchen during the Solar Decathlon open viewing

The home is constructed in a simple peaked gable-style.

The lofty nature and high ceilings give the home the feeling of more space than it actually has.

Visitors are touring the house during the open hours of the Solar Decathlon.  Tape guides the viewers on a pathway through the home.

The kitchen counters were constructed from poured concrete.  Concrete is a material with thermal mass and thus can store solar heat in the winter time when it enters the house. 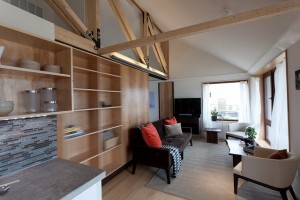 The inside of the house has beams that guide  sliding partitions that can open up the home, while they can easily also be closed to allow for more privacy.

The picture to the right shows the partition being closed. 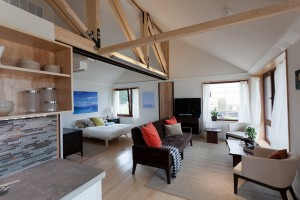 Or the house can be opened, with the partition tucked away. Credit: Jim Tetro/U.S. DOE – Solar Decathlon

Conversely, the wall can be tucked away to open up the home.

The same effect can be done on both sides of the home.

This aspect no doubt helped the home to capture 4th place in the Marketability category of the Solar Decathlon. 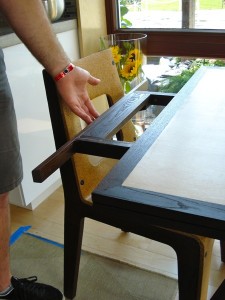 Students made this table – along with many of the other types of art and furniture throughout the home.

Not only was the solar efficient home designed and created by the students, but as one of the oldest publicly funded art universities in the U.S., students also made the lovely art and furniture that graced the 4D home.

The kitchen table shows the attention to detail within both the design and build process.

Similar to a few other colleges that designed and built the home, as well as seemingly everything else within the home,  it seems that schools that go this extra effort should receive extra points in the Solar Decathlon.

While it is a feat in itself to create an efficient home, this extra creative effort is one that should be recognized in the Decathlon, as a home’s different elements, such as furniture, can increase the overall efficiency of the home. 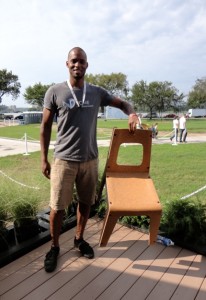 Think of the learning experience of students who also designed and built the furniture and the home compared to other colleges that had furniture on loan from various companies and contracted the fabrication of the home to outside companies.

Is this a level playing field?  Just something to think about for future competitions.

Francisco Luna designed and built this cork chair.  It has two thin layers of carbon fiber, making it tremendously strong and light.  The Ash wood is heat treated, making it darker in hue and stronger.  See the chair up close in the photo gallery that follows the article.

The other efficiencies of this home include triple paned wood clad windows and a heat recovery ventilator that pulls in fresh air into the home. As the stale air is leaving the home, up to 85% of the desired temperature is recovered and inserted into the incoming air.  Diagrams of the air flows are in the gallery below.

This lofty and flexible 945 square foot home was highly efficient with a 2nd place finish in the Energy Balance category. It was estimated to cost $267,913.06  to build the 4D home (and imagine, little or no energy utility bills) and the team finished in 9th place overall.

To see more pictures and learn more about the 4D Home from Team Massachusetts, take a look at the gallery, scores and video below.

Click on a picture to enter the gallery.  Click on the right side of the picture to proceed to the next one.  Click anywhere in the darkened space or on the “X” to exit the gallery. 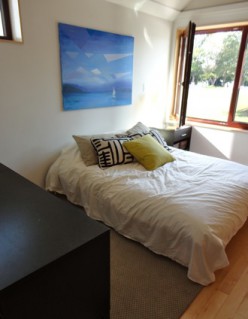 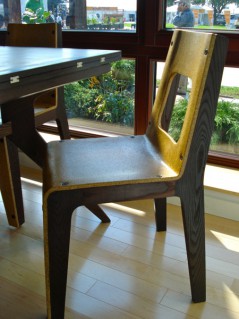 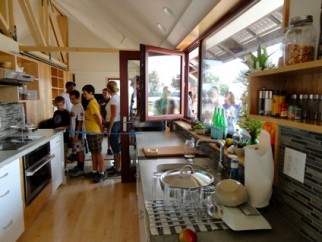 The kitchen during the Solar Decathlon open viewing 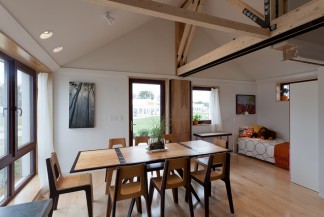 The solar panels block the summer sun from entering the home, keeping it cool while generating solar electricity.

Students made this table – along with many of the other types of art and furniture throughout the home.

The solar panels are mounted on a frame

The team combined solar thermal and solar PV in the panels 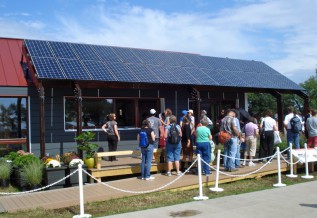 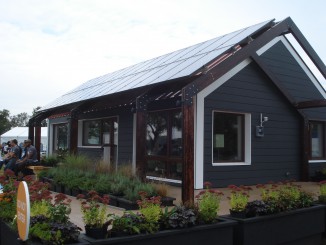 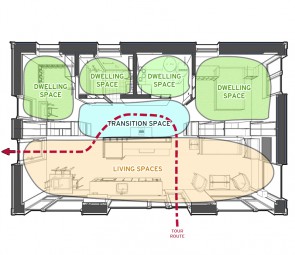 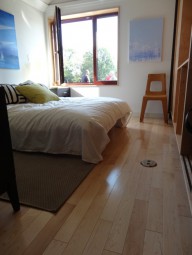 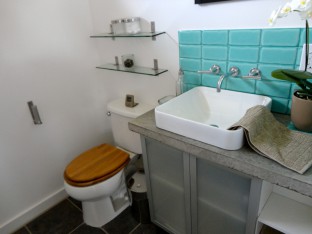 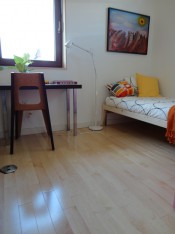 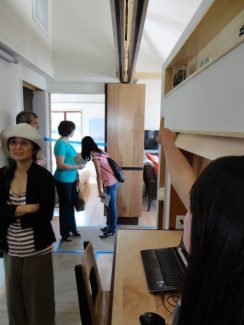 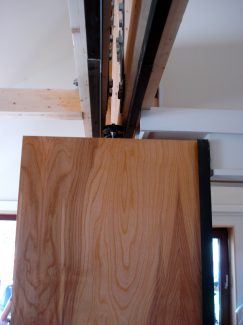 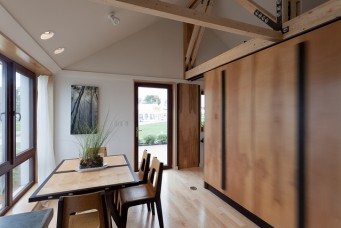 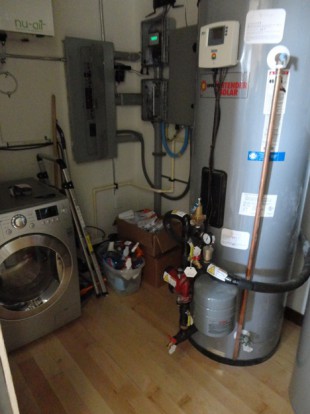 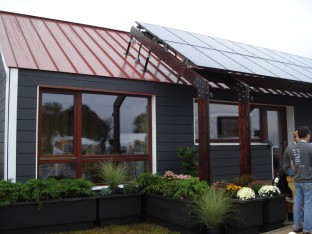 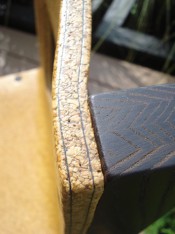 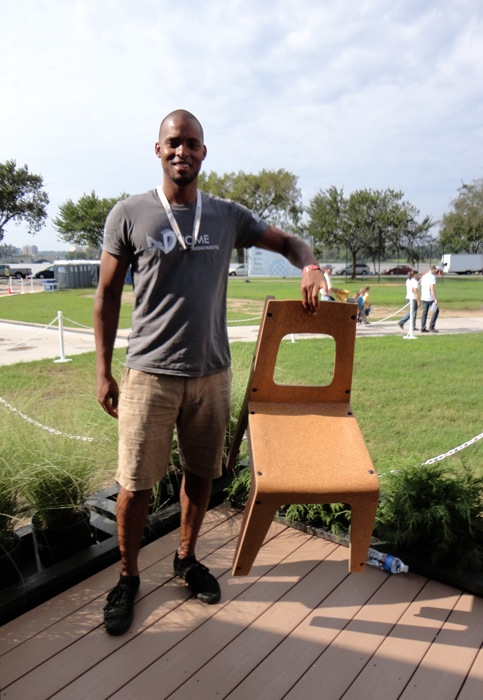 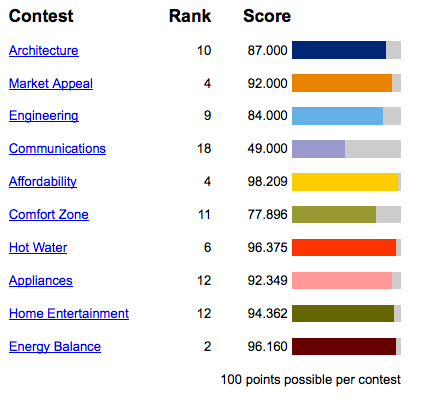 A screenshot of the final scores for Massachusetts from solardecathlon.gov.

The Team Massachusetts Website for the 4D Home 4dhome.us

See the original model of the 4D Home entered into the Solar Decathlon.