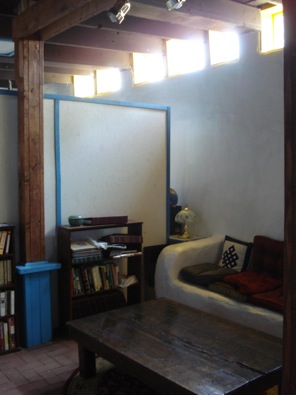 The thick adobe walls of an older house in New Mexico add thermal mass to the building.  Even the sofa was made out of adobe.  Amazing what one can do with mud.

There’s been a delay in posting, more so than usual, and there are a few reasons why.  I recently moved to New Mexico for a new job.  Originally, I didn’t think that moving would take much time, but in actuality, it takes a surprising amount of funds and lots of time.  Luckily, for the aspect of time, it is summertime and the daylight hours are long.

The summer solstice (this year on June 20th) has come and gone, and now the daylight hours are slowly waning.  There was recently a question about the sun’s rotation on another post, that made me think about how easy it is to take for granted the sun’s cyclical changes when we so often live inside and rely on electrical / mechanical devices for heating and cooling.

Yet some of the most efficient building heating and cooling strategies are passive – the aikido of building – by using certain materials and situating the building a certain way.

Because the sun’s interaction with the earth is predictable, combined with the fact that the sun is our major heat and light source, it makes sense to use materials and build in a way that helps buildings be more efficient and work with the sun to stay cool in the summer and warm in the winter.

In honor of the recent summer solstice, here’s my favorite video that shows the stars in a fixed position and the earth in rotation.  Here’s the original post that goes into more detail. 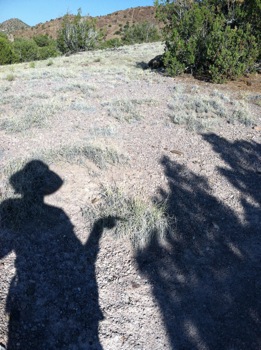 If you’re hiking in the hot desert sun and want to rest, do you stand in the sun and take a drink or do you find shade?

Passive solar cooling is a simple concept built on common sense.  It is often innate within all living things. For example, if you go on a desert hike in the summer sun, when taking a short rest for a drink of water, would you stop in the shade or stand in the blazing hot sun?

More often than not, when faced with the choice, a person would rest in the shade to save energy.

I once had a black dog and she always found the shady spots to take a rest.

After taking the picture, I moved into the shade and felt the instant coolness of the shade, got refreshed then continued on. 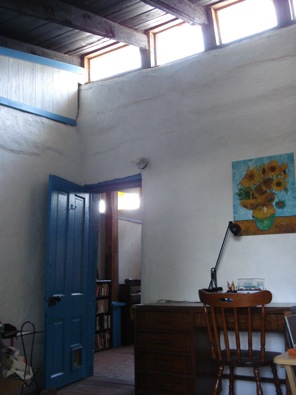 The southern facing windows are located near the top of the house. Note the thick adobe (mud) walls.

Building a passive solar house is modeled on a similar concept where the building itself creates its own shade in the summer to help keep itself cool.

A passive solar house is designed and built taking into account the orientation of the sun, to give the house full shade in the summer, while it collects and radiates heat in the winter.  Materials with thermal mass that either stay cool, or store and radiate solar heat in the winter, are placed in strategic places.

My new abode is one of the older adobe houses in Albuquerque.  I’m told its picture graces the New Mexico history section in a museum nearby.  Pancho Villa’s lieutenant is said to have stayed in the house.  It has a brick floor and thick adobe walls.

Initially, I was very excited to be living in an adobe house, thinking that its thermal mass would keep the house cool in the hot summer.  Its windows are also situated toward the south.  Finally, I thought to myself, I would be living in an efficient house.

Unfortunately, it’s not a true adobe house, as it is covered in concrete.  That is not that bad of a thing, (it simply annoys the adobe and plaster purists) but there is a major weakness of the house having to do with the roof.

Upon looking up at the ceiling, a person would notice the typical New Mexico ceiling aesthetic with sturdy, dark, wooden beams, overlaid with wood.  Beauty, however, is skin deep. Continuing with the layers, on the other side of the wood, serving as the the outer layer, is rolled tar paper. 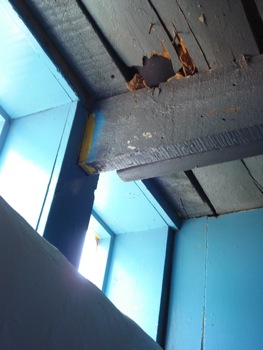 The tar paper just above the wooden beams can be seen. (Bad, because no insulation.) Also note the thickness of the walls. (Good, because it builds up the thermal mass.)

What’s missing from this combination?  Insulation!  The layers can be seen in a hole in the ceiling.

If I climb up on a ladder, for example, to place something further up on the wall, just rising 5 feet toward the roof, because of the lack of ceiling insulation, the searing desert heat from outside can be felt.  There seems to be a difference of 30 degrees from the ground level and near the roof.

It is July, in Albuquerque, and the days have been in the 100’s. While most of the houses have swamp coolers to keep the inside temperature reasonable (cooler air sinks while hot air rises) it would be a tad bit more efficient if the houses were better insulated, and of course, built passive solar.  Remember that passive solar building incorporates a few interrelated facets that include: windows, southern facing orientation, an overhang and insulation. 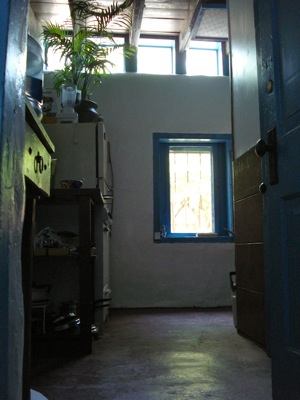 The high southern facing windows allow light in throughout the day while allowing for privacy.

This house does not have all the facets that are needed to make a house passive solar, although it does have character.  For now, that is what I have.  Someday, someday, I will have an efficient house.  I am in a great location to learn about different variations in passive solar building.

New Mexico has a large percentage of passive solar homes and I look forward to exploring and posting information and pictures about them.

The remaining Solar Decathlon homes will soon be posted, as will a writeup about my experimental foray into recycling Styrofoam.  What prompted this – you may be wondering.

After moving out of the mountains to the Front Range (Denver-Boulder area), I was amazed at the amount of waste generated in cities.  I was starting to get a little depressed, but instead decided to do something about it.  I wanted to utilize and leverage a material’s inherent strengths.  My target: extruded polyurethane, otherwise referred to as Styrofoam.  Styrofoam has a great insulating properties.  I began a project of collecting it, with the goal of making recycled extruded polyurethane structured insulated panels (SIPS).  I’ll be posting about that – complete with pictures.

One other thing, if you’re in Colorado, I’ll be speaking at the Sustainable Living Fair in Fort Collins this September.

Happy summer, enjoy the long days and the other posts will be coming soon.