How Styrofoam Can Be Recycled 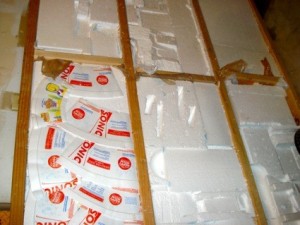 Recycling Styrofoam can work. Here’s the Styrofoam made into 16″ x 4′ blocks of insulation.

After moving out of the mountains to the city, because I saw Styrofoam waste almost everywhere I looked, I decided to try to collect and do something with it.

This is a story of how I recycled Styrofoam for the purpose of building insulation.  (I want to make a passive solar shed.)

This topic is divided into three different sections: Research on Styrofoam, How Expanded Polystyrene is Being Used in Building, and this is part 3 – How I Recycled Styrofoam into Building Insulation.

After doing basic research, I approached fast food restaurants that used it, along with several big box stores. (That in and of itself was interesting as I learned about different management systems and levels of efficiency within the respective systems.) 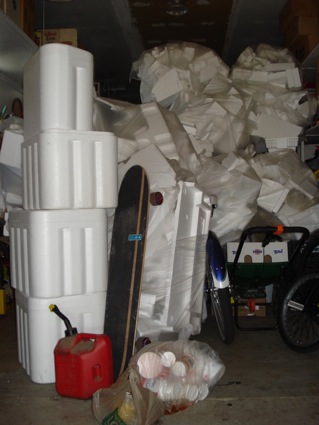 In a very short amount of time, the garage was overflowing with bags of Styrofoam.

By the end of the week, managers at the various stores were saving it for me. I’d pick it up in bags and soon amassed gargantuan, ridiculously large amounts of waste, but clean, Styrofoam.

Take note: Styrofoam is a material that is really easy to obtain. Store managers hate the stuff. A lot of the merchandise on store shelves ship in Styrofoam, but the material doesn’t smash down, taking up lots of valuable space.  Styrofoam is also a material that has great insulating properties.  Why not use the waste to make more efficient buildings?

I originally had the idea that I would make SIPS (structured insulated panels) by using Styrofoam in the core but, this proved to be difficult because the foam came in different sizes and a myriad of shapes. In order for insulation to be efficient, it needs to be continuous. (Imagine how efficient a jacket would be with a bunch of holes in it.)

With my non-building background, I made various models and soon realized that there would be a problem with attaching the Frankenstein-style SIPS to the building foundation.

My next idea was working with traditionally framed with 2 x 4s, in the 16” on-center (o.c.) style of building. I could make a wooden form, then create blocks of insulation that would fit between the 2 x 4 stud walls. 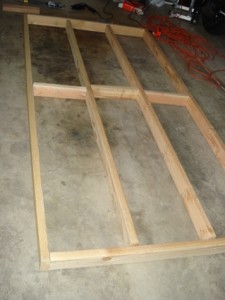 The bags of Styrofoam were unpacked and sorted, then sawed into pieces that were bound together with an adhesive. I purchased a lovely thin, fine saw and went to town. The remaining gaps were filled with expanding foam. After it set for approximately 12 hours, an amazingly, large, thick 4′ piece of insulating foam emerged.

After seeing that it worked, I then moved onto the big leagues of building. I went to the home improvement store and purchased 12 – 2x4s and a 4′ x 8′ piece of OSB (oriented strand board). I has surprised by how heavy OSB wood actually is.

The idea was to create continuous pieces of Styrofoam that would serve as insulation to be fitted into a traditionally framed house. 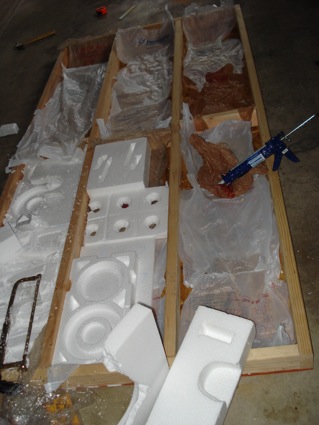 Plastic shopping bags were used to line the form.

Instead of using the ¼ inch or even 1 – 2 inch Styrofoam insulation between the 2 x 4s, a nice, big slab of 3.5 inch insulation would be fitted into the frame.

Each section within the wooden form was lined with plastic shopping bags that served dual purposes: The plastic would act as a vapor barrier as well as keep the Styrofoam adhesive and the expanding foam from attaching itself to the wooden form.

The pieces of Styrofoam were carefully fit together. The smaller pieces were sandwiched inside of the larger pieces and bonded together. 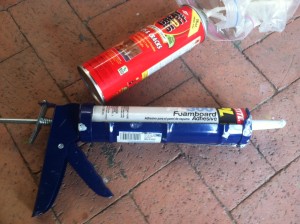 I used a foam adhesive and expanding foam to bond and fill the gaps in the Styrofoam.

I used a foamboard adhesive to bond large straight pieces of Styrofoam together, then filled the gaps with an expanding foam. 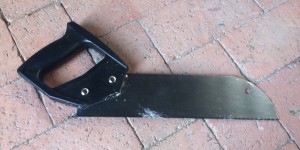 This thin, serrated saw seemed to be the best option that I used.

I also used a thin serrated saw for the project.  I previously tried both a regular saw and a metal pipe saw.  The regular saw sheared off more of the little, white balls and made more of a mess.  The small pipe saw made a nice, clean cut, but was problematic because it couldn’t follow through the Styrofoam because the larger metal top broke the brittle Styrofoam. 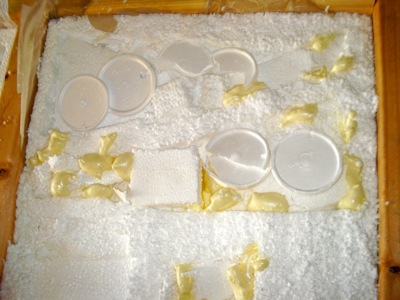 As much Styrofoam and expanding foam were packed together into the form.

I packed as much Styrofoam as possible into the form.

Larger, continuous pieces were used on the outer edges of the form.

When pieces of smaller foam were near the outer edge, cups were cut to make a scale pattern and glued on top to form a type of exoskeleton. 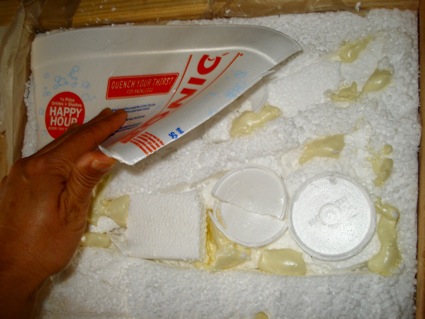 I placed larger pieces near the back, and used smaller pieces toward the top, then covered them with flattened cups to make a scale-like pattern.

Overall, the project worked out pretty well. Well-formed large, continuous pieces of insulation were created out of materials that were bound for the landfill.

As the project was gathering inertia, I accepted a job in New Mexico teaching film. Much to both my dismay and relief, it cut the building project off short.

Originally, I was going to use my retirement from my previous job to make a passive solar shed using the recycled Styrofoam blocks. Instead, I used it to relocate to the desert of New Mexico. Now that school is back in session, it has curtailed writing time on this magazine. (But I’m getting the hang of it and catching up with articles on GPS.com.)

There’s an abundance of the waste material that makes it really easy to collect. Doing this type of a project does take some time and patience. With an assortment of pieces of Styrofoam, it took me about 8 hours to make approximately 6 – 18” x 4′ panels. 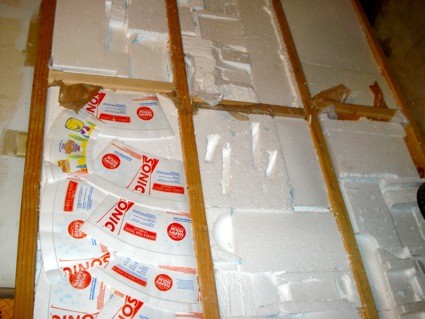 The recycling Styrofoam project did work.

Imagine what the world would be like if we could all start doing crazy projects like this to make better insulated homes and keep Styrofoam out the landfills.

It’s a hope of mine that they stop using Styrofoam altogether. While it is readily available, instead of throwing it away, why not utilize it? It’s possible.

A big THANK YOU! To all the people in the various stores and restaurants who saved the expanded polystyrene for me. Thank you for listening to my crazy idea, then saving it so I could try this project. You all are awesome.

Here’s an image sent in by a reader (see comment below) who used recycled Styrofoam in her build. 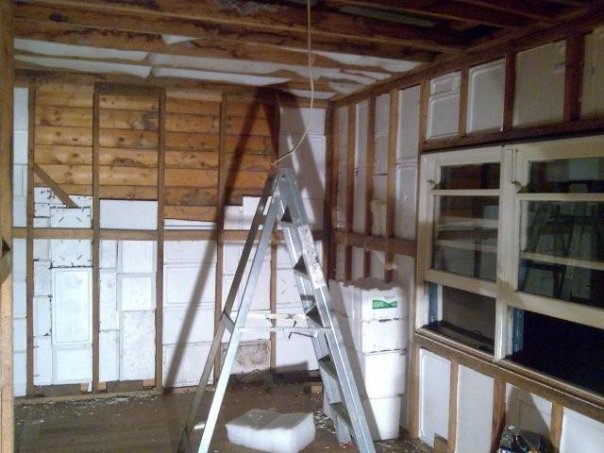 The reader used old Styrofoam boxes in wall cavities to renovate a room.

I’d recommend putting a liner of plastic on both sides of the Styrofoam because it does give off a smell. 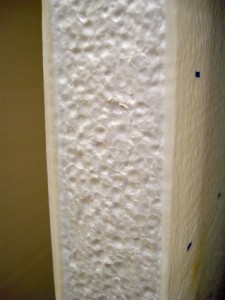 Styrofoam insulation used in building has a thin layer of plastic on each side.

Note that the type used in building does come with a thin layer of plastic that is a vapor barrier.

When transporting the bags of Styrofoam from the collections points, there were times when the large amounts of Styrofoam in the enclosed space of my car made my eyes water.

It’s good to work with it in a contained, yet well ventilated area (not outside), as it goes everywhere. When Styrofoam is sawed into, it releases tiny little balls of expanded polystyrene everywhere.

I worked in a hot garage. I fainted once. I think maybe because it was hot, but the fumes may have had something to do with it. While Styrofoam is a somewhat noxious substance, we continue to eat and drink from it regularly. Along with the need to use the masses of the stuff that never decomposes, perhaps other materials could be sought out, developed and used?

Just somethings to think about.  🙂