Passive and Active Solar Retrofit on a Traditional Adobe

In this lovely and innovative passive solar retrofit, an older adobe home transformed to become an efficient, modern house with a south facing sun room and a south facing two-story Trombe wall.  It is also a grid-tied solar electric home that produces enough electricity to have paid for the solar photovoltaic (PV) system within the first 8 years.  Currently, instead of paying for utilities, they receive a check for 80 to 90 dollars each month from the electric company. (The theme was changed, so will need to work on formatting errors

The original home is situated in the middle of the current house, sandwiched by the first addition to the south, followed by the two story addition built onto the northern side of the house (south facing).

The first addition the adobe home was the stick-frame sun room built to the south of the home.  The early addition has both vertical as well as slanted, overhead glazing.

It was built on a 4″ concrete slab floor that is its thermal mass.  Prior to pouring it, they mixed in a pigment to give the floor a reddish hue.

After building it, they found that the overhead glazing made the house too hot during the Albuquerque summer time.

As a result, they took out the overhead glazing on the western side.  (Additional photos can be seen in the gallery below.)

Venting windows were installed in the upper west and east facing walls of the sun room.

When open in the summertime, they allow ventilation into the space while allowing hot air to leave the room.

Inside the Main House

The original older adobe house was built in the traditional pueblo New Mexico style, with a flat roof and vigas, the logs supporting the roof.

They were traditionally built with thick adobe walls and small windows, attributes that can lend to a darker house.  In addition to the sun room, overhead sky lights were also installed over the entry way and the kitchen.

There is only one propane backup source of heat located in the dining room.  The owner says that it is typically only used on winter mornings.

In the second stage of building, a two story addition was built to the north.

The passive solar addition is wider and taller than the original house, so the sun can passively warm the south-facing, northern section of the building in the winter.

On the western side of the building, the southern facing windows allow the winter sun to hit a water wall located within fiberglass tubes inside the house.

Because the house faces the south, an overhang is used to block the summer sun thus keeping it cool in the hotter summer months.

The adobe bricks used in the Trombe wall were purchased from an adobe brick company NM Earth.

When asked about the process of building with adobe, and the builder echoed what people who build with adobe typically say, that it is a relatively forgiving, nontechnical material, and that adobe can simply be stacked up within a framed structure.

When approaching the home, the second story gracefully exudes its artistic dominance over the older adobe.

Going inside the house to see the other side of the Trombe wall, an open lavender room greets the visitor.

In order to keep it from getting too bright,  they used glass bricks and a east facing bay window in the room.

They kept a similar south western look throughout the house by building the same viga-style ceiling.

Here another house that has a Trombe Wall.

The layers of the house from inside to outside are: adobe, a vapor barrier of tar paper and wire mesh, followed by 2 inches of urethane foam insulation. (Because passive solar houses store and then release the sun’s heat through the colder winter night, the outer walls must be insulated.)  This is followed by a layer of adobe plaster to the outside.

On the western side of the two story addition located behind the existing house, huge fiber glass tubes filled with water are situated to collect and store the sun’s heat in the winter.

In regard to thermal mass, water has the ability to absorb and store the highest amount of  heat, over twice that concrete or stone.

The owner said that they were installed in the house over 12 years ago and are very low maintenance.  He pours a little bleach in them about once a year to keep the water clean and free of algae.  They have had the same city tap water since they were first brought into the house.

Here’s a view of the windows that face the south within the two story addition.

Because of the orientation of the windows (facing the south) combined with the overhang on the roof and the positioning of the glass tubes, the house does not receive that much direct sunlight in the summertime, helping the house to stay cool.

In the winter, because the sun travels a lower and shallower path, the winter sun hits the tubes of water on a sunny day allowing the water (thermal mass) in the tubes to absorb the sun’s heat, helping to keep the building warm.

BTU (British Thermal Unit) is a unit of measurement that quantifies heat.  One BTU is the approximate amount of heat required to raise one pound of water by one degree F.

The last modification to the house was the integration of active solar on the roof to supply solar electric power.

The active solar system was added in 2005 shortly after the first Gulf War, for practical and philosophical reasons.

It was one of the first grid-tied active solar home systems added in the state of New Mexico.

Debunking the false myth that solar doesn’t pay for itself, the system cost the owner-builder $30,000 and was paid for in the 8th year.  The array is composed of three sets of 15 panels and is rated at 5KW.

Because the home is grid tied and creates more energy than the home uses, the solar system continues to generate money.  As a result, the household receives a monthly check from the electric company that varies between 80 – 90 dollars.

In New Mexico, the utility company pays the retail price for electricity generated and put into the system over and beyond what the building uses.  (This is in contrast to Colorado, where utilities pay the wholesale price for energy generated by external solar electric homes and businesses.)

I visited the house on a cold, slightly overcast day in December.  Notice that even on a cloudy day, the solar photovoltaic (PV) system was creating electricity.

Looking at the addition from the southwest, one can see where the sun room joins the adobe.

There is also a cistern that collects water from the roof.  The tank is slightly raised, so when a hose it attached, via gravity, it is fed into the hose and to the garden.

This house has shown innovative ways to add passive solar additions to a house.  The inside of the home was filled with light and warm, even on an overcast day.  While the different additions were added over many years, the result is a comfortable, modern and efficient home.

To see more photos of the house, take a look at the photo gallery below.

This house has a lot going on, built in stages to incorporate both active and passive solar.

A passive solar greenhouse was added to the front of the house. 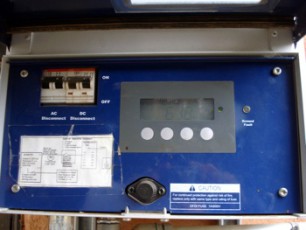 Even on a cloudy day, the solar system was producing electricity. 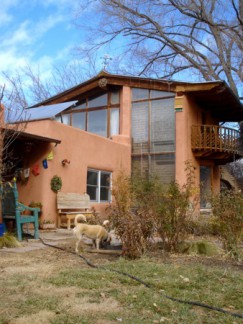 The two story addition has a Trombe wall built on the eastern south facing side of the house. 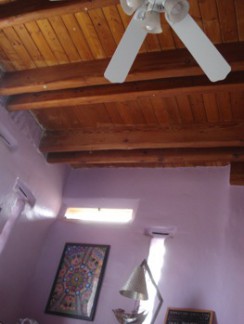 This is the inside (backside) of the two-story Trombe Wall near the roof. 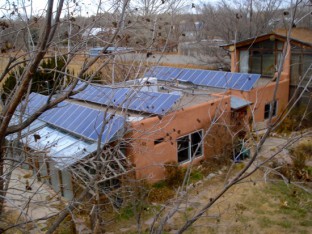 There are three rows of 15 panels on the roof of the adobe house. 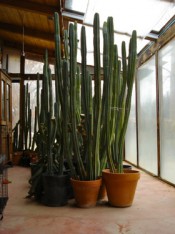 The sunroom was first built onto the home. 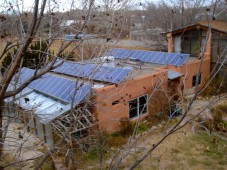 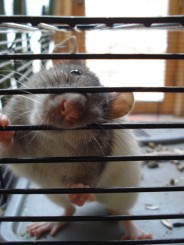 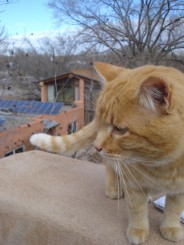 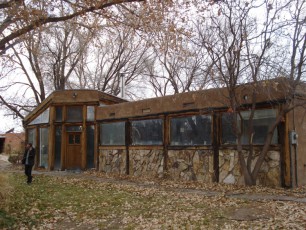 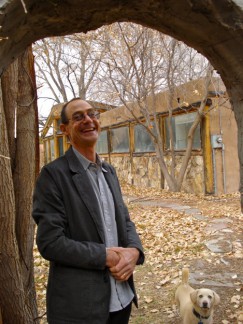 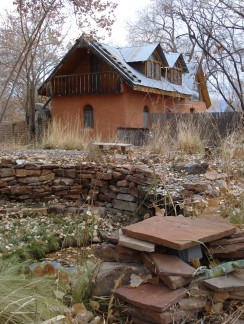 The house is approximately 3000 square feet.