Growing Vegetables in a Cold Frame

Ever wished that you had a way to grow and enjoy fresh vegetables in the winter?  A lot of people live in sunny areas that would allow the growing of food in the winter.  In the high mountain areas near Crestone, Colorado, a gardener experimented with growing vegetables in a passive solar cold frame, and as a control, also planted in a greenhouse.  The passive solar cold frame outperformed the greenhouse!

This was originally posted at The Crestone Eagle, by Kelly Hart 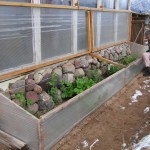 Last spring I built a simple cold frame to get an early start on plants to set out into the main garden later, and also as a place to keep some plants that particularly love warmer weather. It worked very well for these purposes, providing tomatoes, cucumbers, cauliflower, squashes, peppers, eggplants and many other veggies in abundance.

Then this last Winter Solstice we decided to experiment with planting in the cold frame again, just to see if was possible to use it in the winter for growing food. As a sort of control, we also planted seeds in the adjacent greenhouse at the same time. We chose mostly cool season plants, such as lettuce, arugula, peas, bok choy, kale, radishes, etc. that we knew could take a light frost.

It turned out to be particularly cold weather, with several weeks when it never got above freezing outside and with many nights in the minus teens and down to minus thirty here in Casita Park where we live. This, combined with the shortest days of the year, made for harsh growing conditions to say the least.

The seeds were understandably slow to germinate, but nearly all of them did eventually push their tender little feelers into the crisp air. Now, less than two months later, we are eating salad greens daily and will be getting peas soon.

The surprising thing to me is that the cold frame is actually out-performing the greenhouse . . . and this is with a hot tub kept above 100° most of the time in the greenhouse! Why would this be? I’ll tell you the secret: basic passive solar design.

As you might be able to tell from the accompanying photos, the cold frame has a wall of large stones stacked against the north side, which is also the insulated foundation wall for the greenhouse. These stones absorb heat from the sun all day long (even on overcast days) and hold the heat, gently releasing it throughout the night.

Another unseen trick to the design is that I buried about two feet of 1 1/2” rigid insulation in the ground around the perimeter of the cold frame. This effectively isolates the frozen ground outside the cold frame from cooling the soil inside. Even when the air temperature inside the frame might go below freezing, I don’t think the soil did. At night, I also place insulation panels on top of the cold frame to help keep it toastier in there.

My cold frame is roughly 16 feet long, 3 feet wide and 2 feet high in the back, tapering to 18 inches in the front. The top is made of two lids that are hinged in the back so they can be lifted and secured up against the greenhouse wall if necessary, or propped open to ventilate the space. Depending on what you might want to grow in such a cold frame, it could be built higher to accommodate larger plants. During the summer when I had peppers and eggplants growing in the cold frame, I just left the lid open all of the time, so the plants grew beyond the height limits. The total cost of the materials for this was about $250, mostly for the 3/8” twin wall polycarbonate glazing, which I picked up at SLV Building Components in Alamosa. 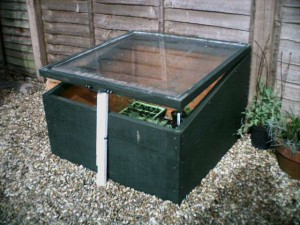 Here’s another example of a cold frame from Wikipedia.

Ordinarily, I wouldn’t advise that people plant seeds in the dead of winter; had I planted earlier, I would have been enjoying salad greens much sooner. What is exciting to me about this experiment with my cold frame is that it proves that it is possible to grow food in our climate year round, without any heat other than that provided by the sun.

I installed a wireless thermometer gauge inside the cold frame that has a readout on my desk, where I monitor the temperature frequently. If it rises close to 100°F. I will go out and prop open the top of the cold frame to allow ventilation to keep from cooking the veggies. I enjoying keeping track of this, and it is easy since I am home most of the time. But if circumstances were different, I could install a simple thermostatically controlled ventilation system to keep the cold frame from overheating.

On a frosty day when I opened the lid of the cold frame to water or harvest veggies, the steamy interior air would spill over the sides. That wonderful warm, humid environment is perfect for the little plants. They are happy . . . and that makes me happy!

The original article: http://www.crestoneeagle.com/a-passive-solar-cold-frame
This is a simple cold frame that can easily be built.  It uses elements of passive solar building such as south-facing design, thermal mass and insulation.  It was inexpensive to build and made it possible to enjoy fresh vegetables in the early spring.