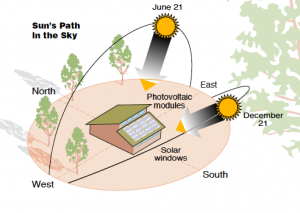 The building’s windows are located on the south side, with solar panels also on the southern slope of the house.

Today is the longest day of the year as the sun travels its highest and longest arc through the sky.

The summer solstice is significant to passive solar building because these types of buildings are oriented and built to take advantage of the sun’s predictable path through the sky.  This helps them to stay cool in the summer and warm in the winter.

Here are some passive solar homes from past articles.

This passive solar home was built in the high desert country and features two Trombe walls. The owner-builders said that the Trombe walls sections of the home are noticeably cooler in the summer (as well as warmer in the winter) and that they wished that they would have built more Trombe walls into the house.

Visitors to this off-grid passive solar house have asked if air conditioning was installed. Nope, the windows are simply situated to facilitate natural air flow and, its design is such that the summer sun is blocked from entering the house. While living at at an elevation of 9,000 feet they are also toasty warm in the winter.

This house is grid tied, has active solar PV panels and makes more energy in the summer than it uses.

Like all other well-built passive solar homes, this one is warm in the winter and cool in the summer.

This was formerly an older farm house that was totally transformed, more than doubled in size and converted into an efficient passive solar home. If they can do it to this house, any house can be retrofitted.

It’s also an envelope house and also uses air currents to keep the house cool in the summer.

There were also some impressive passive solar houses in the 2011 Solar Decathlon.

Shade can be created with a roof overhang.

In essence, a passive solar house is one that’s built to take advantage of the sun’s path. By orienting the windows and their overhangs a certain way (facing the south) the windows will let light in, while the hot summer sun is blocked from entering the house.  This helps the home stay cool. Because the sun travels a predictable wide, high arc through the sky, the house’s windows must simply be located in a place that will take advantage of its predictable path.

Think of it in these simple terms: Imagine yourself hiking on a hot summer day. When taking a rest (imagine that you’re hot, sweaty and tired) do you find a place in the shade or in the sun? Most would rest in the shade.

Similarly, a building can be built to be shady on the longest and hottest time of the year.   We have the technology and materials to build passive solar elements into buildings, thus making them efficient just by orienting them a certain way. 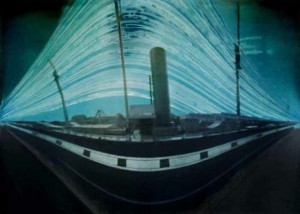 This photo was exposed for 365 days while strapped to a telephone pole.

In all the time I’ve been going around interviewing home owners and builders, I can say that all of them are intelligent, happy people.

Thus, I think it’s safe to say that passive solar home owners are 100% more happy than people who are living in inefficient houses and pay high energy bills.

Learn more about the movement of the sun.  (Depending on your point of view, well – it’s actually the earth.)