How Passive Solar Keeps You Cool in the Summer 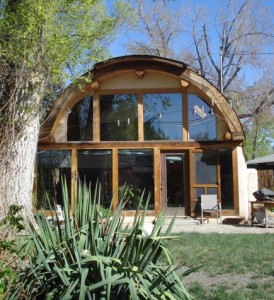 The photo was taken in May, so some sun is entering the house, but does not on the summer solstice.

The dog days of summer are upon us.

Yet well-built passive solar houses are cool. When I visit them, I’m amazed at how cool they are in the heat of the day.

Typically, in the midafternoon as the temperature soars over 100 degrees Fahrenheit, upon entering the house, one is greeted with a cool temperature of 75 degrees.

(I’m currently living in a traditional, inefficient house, in the hot sunny environment of Albuquerque.  Knowing about how passive solar design works – makes me slightly frustrated, wishing . . .  well, so, I write about them.)

Passive solar is the aikido of building because it works with preexisting elements, mainly the sun. It strives to keep occupants cool in the summer and warm in the winter. I’ll explain how and why passive solar design works. 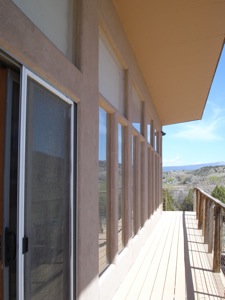 Shade can be created with a roof overhang.

Knowing that the sun rises in the east and sets in the west, if a house is built to have windows facing the south, the higher rotating summer sun will not enter and add to the warmer temperature of the house. (That’s why passive solar builders will have heated debates about axis orientation and are really interested if a house is facing true south or not.)

Enter the concept of the ‘overhang’.

If the house is on a east – west axis with the windows facing the south, a small overhang will shade the home’s windows during the hottest summer months.  Combine this with certain materials that contain thermal mass, and you’re getting closer to passive solar design. 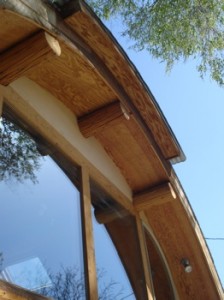 In the heat of the summer, the passive solar house is shaded, by virture of its design – and note the tree in the reflection.

The deciduous tree to the immediate south provides shade in the summer.  Because the tree looses its leaves in the winter, the house gets maximum solar gain when the home seeks the warmth.

Read more about a build where an owner-builder converted a military issue, one-story Quonset hut into an efficient two-story passive solar Quonset hut. 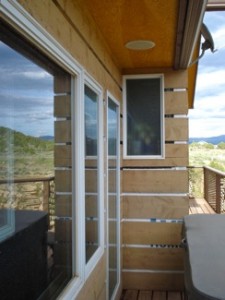 The windows and the Trombe wall is shaded throughout the hotter summer months.

Use materials that have thermal mass because they help keep a building’s temperature stable.

Materials with thermal mass are dense and have the ability to absorb temperature, both hot and cold.  Their inherent nature contributes to keep temperature stable.

Note the integration of passive solar building principles: The picture shows the windows facing the south.  They have also been recessed, further ensuring that they will be shaded in the summer.

If you look into and past the first set of windows, you’ll see a Trombe wall (made out of concrete blocks = pure thermal mass) located 2 feet from the outer windows.  The Trombe wall has been painted black to help it absorb heat in the winter, but it stays cool in the summer since the sun’s heat will not be absorbed into the wall.  (The frame of the 2nd window can be seen in the Trombe wall.  The owner builders wanted to have natural light in the living room, so they lined up the windows in the Trombe wall.)

With hindsight, the owners of this house wished they would have built more sections of Trombe walls because the parts of the house that have them are noticeably cooler.  The dense nature of the walls help to maintain a cooler temperature in the rooms where they are located.  Check out their passive solar building project.

The Trombe walls have been covered with stucco on the inside so that they integrate with the room and the style inside the house.  There are many ways to integrate materials with thermal mass into a build. 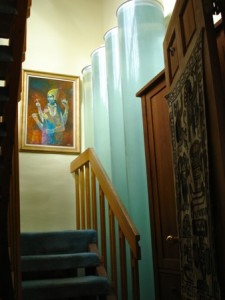 The fiberglass water tubes allow the home to store the sun’s heat in the tubes.

Water has a high threshhold of holding a temperature stable.  As a result,  some passive solar builders have integrated water tubes into their home designs.  The water tubes are placed where they will absorb the winter sun, but are shaded in the summer.

In the summer, because materials with thermal mass are placed – where the sun don’t shine, the materials help the house stay cool.

Conversely, in the winter, (remember that the house has predominantly southern facing windows) the materials are in a place where they can absorb the lower rotating winter sun’s heat throughout the day.

Browse through any of the passive solar buildings and note how thermal mass is integrated into the overall design. 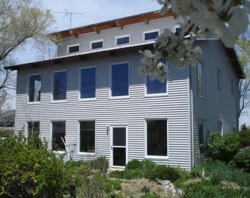 The windows on the sides of the house are opened, along with the top, cooling the house.

The aikido philosophy of passive solar design once again asserts itself within the naturally occuring movement within air.

Buildings are essentially units of space that are constantly trying to equalize themselves with their surrounding environment. They will always seek to equalize their pressure.  For example, if a swamp cooler is on, it draws water-cooled air into the house, creating a situation wherein there is more airflow and pressure inside the house.  If a windows is opened, the curtains will be pushed against the screen.  Often, the room with the open window will be the coolest since air will move toward that section of the house in order to achieve equilibrium.  (In regard to insulating homes in the winter, a well insulated house needs to fight crack infilration.)

If a building has an opening near the bottom and top of a building,  air will be pulled into the bottom opening, is often routed over the thermal mass (easy – if the house has a tile floor) and cooled.  It will then circulate throughout the house.  As the air heats up, it rises and leaves out the higher opening.

This is sometimes referred to as an “envelope house”.  Read more about this passive solar house.

Homes are also frequently opened to the cooler temperatures of the evening and night, then as the day heats up, more windows are closed to preserve the cool temperature, or to facilitate certain air flows through the house. 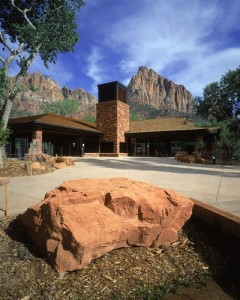 The convective cooling tower can be seen in the middle of the building.

The Zion National Park Visitor’s Center also uses passive air as a cooling mechanism . A cooling tower was integrated into the design to facilitate airflow.  It can be seen at the center of the building.

It operates a little differently than the previous example.  It draws in air through evaporative filters located at the top of the tower.  Water is sprayed on the filters so as air is being drawn in it is also cooled.  The resulting dense, cool air falls and is pulled into the lower main building.

There are many passive solar strategies that can be harnessed to build efficient homes.

All the passive solar houses that I’ve profiled have been cool in the summer.

Don’t be fooled by the ‘passive’ word designation attached to solar, because while its overall philosophy takes a little planning, in the end it’s smart and efficient.

In conclusion, the building’s orientation, its materials and surrounding environmental factors all contribute to making an efficient passive solar building that is cool in the summer and warm in the winter.

There are a couple of other important integrations, like insulating a house to help keep its temperature stable, however these are the basics of passive solar design.

Another quick note: They also tend to be quiet and peaceful as they often do not have the humming sound of machine blown air.

Stay cool and have a good summer!