Playing the Angles for Solar-Responsive Design

My apologies, it looks like the online magazine SolarToday no longer exists, so the images are missing. 🙁

This article first appeared in the May 2012 issue of Solar Today.

In all but the simplest situations, knowledge of solar geometry is vital for creating successful solar-responsive designs.

Not only is that the only way to understand solar geometry in relation to building design, but it is also what we see every day: the sun rises in the eastern sky and sets in the western sky.

Let’s also assume that a very large dome covers the building site, a dome that is opaque except for the part where the sun shines directly through during the year. This transparent part of the sky dome is called the solar window, and it is defined by the paths of the sun on the summer solstice (June 21) at the top and on the winter solstice (Dec. 21) on the bottom (see figure 1, below).

The other curves shown in figure 1 represent the 21st day of the other months. Although the solar window is essentially the same shape everywhere on the globe, its position on the sky dome changes with latitude. At the equator, its center is on the very top of the dome, and its position moves down as one moves away from the equator. Figure 1 shows the solar window for 32 degrees north latitude.

Figure 1. Solar geometry is best understood by means of an imaginary sky dome over the building site. The part of the sky dome through which the sun shines during the year is called the solar window. The curves represent the sun’s paths on the 21st day of each month. The compound angle of a sun ray can be broken into a vertical component (altitude) and a horizontal component (azimuth). The skydome has a grid to help us measure these components. The parallel circles define the altitude angle, and the radial lines define the azimuth angle measured from south.

In temperate climates, the solar window has two parts. The upper part is called the “summer solar window,” which extends from the summer solstice (June 21) down to the part of the dome corresponding with the month when summer ends in that climate.

It is shown in figure 2 (below) in various shades of red to reflect the typical temperatures in each month (the darker the red, the hotter). The lower part of the solar window is called the “winter solar window,” which extends up from the winter solstice (Dec. 21) to the part of the dome corresponding with the month when winter ends in that climate. It is shown in figure 2 in shades of blue, again reflecting the typical temperatures in each month (the darker the blue, the colder). Although the location of the solar window is a function of latitude, the size of both the summer and winter solar windows is a function of the severity of the climate at the building site (i.e., how hot it is in the summer and how cold in the winter). One major goal of solar-responsive design is to collect the sun shining through the winter solar window while rejecting the sun when it shines through the summer solar window.

Also shown on the sky dome in figure 1 (above) are reference lines to define the altitude (vertical angle) and azimuth (horizontal angle) of a sun ray passing through the solar window on its way to the building beneath the center of the sky dome. The parallel circles define the altitude angle of the sun ray, with the base circle representing 0 degrees altitude and the highest point 90 degrees altitude. The radial lines define how many degrees the sun ray is from a north-south line. The radial line from the highest point to the south mark on the base represents 0 degrees azimuth. A sun ray from due east would have an azimuth of 90 degrees east of south, and, similarly, a sun ray from due west would have an azimuth of 90 degrees west of south.

Designing to Respond to the Thermal, Not Solar, Year

Sky domes are usually shown as horizontal projections, which are available at intervals of 4 degrees latitude (figure 3 below). Such projections are similar to what one would see looking directly down on the sky dome from an infinite distance. These horizontal projections are called sun path diagrams, because the curves represent the sun paths on the 21st day of each month. Only seven sun paths are needed to represent all 12 months because of the annual solar symmetry. The sun makes the same path across the sky dome on the 21st days of January and November, of February and October, of March and September, of April and August, and of May and July. Only the June 21 and Dec. 21 sun paths represent one day each. The altitude and azimuth lines are also projected as concentric circles and radial lines respectively.

To make use of sun path diagrams in designing buildings, it is critical to understand that the solar year is out of phase with the thermal year. Although the Earth receives the most solar heating on June 21, it is hottest in July/August. Because of the Earth’s mass, it takes time for the Earth to heat up after the previous winter. Similarly, the Earth receives the least solar heating on Dec. 21, but the coldest months are January and February, because it takes time for the Earth to cool down after the previous summer’s heating.

Thus, it is important to understand that although sun angles and the solar heating effect of the solar year are symmetrical about the insolation peak and low points of June 21 and Dec. 21 respectively, the resultant heating and cooling requirements of the thermal year do not correspond with these dates — and, of course, buildings must be designed to respond to the thermal year, not the solar year.

The sun path diagram shown in figure 3 is the horizontal projection of the sky dome shown for 32 degrees north latitude. By again using shades of red and blue to represent the typical temperatures throughout the year, we can superimpose the thermal year on top of the solar year, as shown in figure 4a (below). However, since the thermal year and solar year are out of phase, we will use two copies of the same sun path diagram — one for June 21−Dec. 21 (4a) and the other for Dec. 21−June 21 (4b). Note how the hottest and coldest times are about one-and-a-half months after the days we get the most and least solar heating. For this example, we are using the climate in which the end of the overheated period is about Sept. 21 and the end of the underheated period is about March 21.

Although the climate we’ve chosen for our example seems like a special case, it is not. For instance, a somewhat colder climate would have the end of the overheated period (summer) around Aug. 21 and the end of the underheated period (winter) around April 21. Note that the sun makes the same path across the sky on both Aug. 21 and April 21. As with the climate where we want full shade until Sept. 21 and full sun expo- sure until March 21, overhangs need to be able to change from full shading to full sun exposure in one day. Fixed overhangs, unfortunately, cannot come even close to meeting this goal. Since the daily changes in sun angles are small, it takes many months for a fixed overhang to go from full shading to full solar exposure. Consequently, there are many hot months when a fixed overhang does not shade sufficiently and many cold months when much of the valuable sunshine is blocked. See my shading article in the March/April 2012 issue (“Shading for Energy Savings,”) for a full explanation of this phenomenon.

The mediocre performance of shading systems or any other energy-saving feature is no longer acceptable — preserving the planet depends on buildings of high performance.

Placing Glazing Based on the Sun’s Annual Path

Both the sky dome and sun path diagrams clearly show that the summer sun spends the whole morning in the eastern sky, the noon hours high overhead and the afternoon in the western sky. See the red shaded area in figure 4a.

As a result, solar-responsive design should minimize east windows, skylights and west windows. Any necessary east or west windows should be heavily shaded, and south-facing clerestories (e.g., dormers) should be used instead of skylights to keep out the high summer sun while harvesting the winter sun. The clerestories should face north in climates that need no heating in the winter. These tools also clearly show that the winter sun spends the whole day in the southern sky, making south windows the most desirable wherever winter heating is required (figure 4b below).

Figure 4b. Because the sun makes the same path across the sky on March 21 and Sept. 21, a fixed overhang can’t let the sun enter a window on March 21 and keep it out on Sept. 21; the sun angles are the same.

To further understand solar geometry, we can view the sky dome in section. Figure 5 (below) shows a north-south section through the sky dome at 32 degrees north latitude. At every latitude at noon, the Dec. 21-altitude angle of the sun is 23.5 degrees below the equinox angle (March and Sept. 21) and 23.5 degrees above the equinox angle on June 21. Thus every location on the planet experiences a 47-degree (2 x 23.5) change in altitude angle during a year. Not by coincidence, the tilt of the Earth’s axis of rotation is 23.5 degrees from the plane of the Earth’s orbit around the sun. The view in figure 5 is valuable because it is similar to a north-south section through a south-facing window. 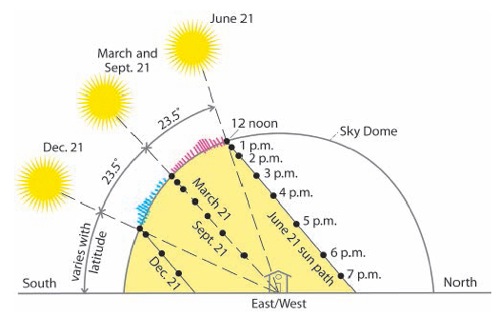 With a basis in solar geometry, effective passive solar heating, shading and daylighting are possible and likely. This basis also helps in placing active solar systems for maximum exposure to the southern sun by avoiding shading from trees, neighboring buildings and the site building itself. In the June issue, we’ll continue this series by examining daylighting, which is more understandable with knowledge of solar geometry.

Norbert M. Lechner (lechnnm@auburn.edu) is an architect, professor emeritus in the College of Architecture, Design, and Construction at Auburn University, LEED-accredited professional and ASES Fellow. He is an expert in energy-responsive architectural design with an emphasis on solar-responsive design. Lechner’s book, Heating, Cooling, Lighting: Design Methods for Architects, is used by more than a third of all architecture schools in the United States and in architecture schools worldwide. He is also a sought-after speaker, giving keynote lectures and workshops at universities and conferences around the world. This article is the latest in his series of SOLAR TODAY articles on solar-responsive design.

This article first appeared in the May 2012 issue of Solar Today.