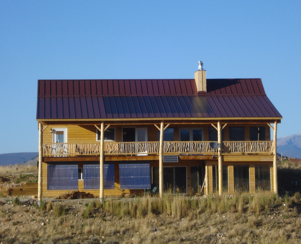 Passive solar houses typically have windows on the southern side of the building.

Based on the movements of the sun, passive solar buildings typically have windows (glazing) on the southern facing side* of the building in order to absorb the sun’s heat energy to warm a building during the winter.  In order to stay cool in the summer, passive solar houses rely on a system of shading (or an overhang) to keep the building cool.

Simply by building in this way, a house can reduce its heating and cooling costs by 85%.

See how the house pictured on the right achieves Net-Zero Energy.

The diagram shows how the low winter sun can enter the building, while the high summer sun can not.

The diagram to the left shows how the sun is lower in the winter, while it is much higher in the summer.  (See the building at Zion National Park.)  During the day, the low winter sun can shine through windows are to allow heat energy to be absorbed into the building’s thermal mass.

While windows allow heat into a building to be absorbed, their thin and transparent nature also allows heat to escape a building.

In order to keep this from happening in cold climates, it is recommended that the glass panes are doubled (double glazing) or even tripled. An insulated window covering or thick shade can also be used to help insulate the windows and help keep the heat in the building after the sun goes down.

The summer sun’s path aides in this process by traveling high in the summer sky, thus a proper overhang or other type of system is needed to shade or cover the widow, in the summer so that the sun’s heat energy is blocked or avoided when it is desired to have the building cooler than the outside temperature.

A properly designed overhang keeps the heat and energy from being absorbed into the house in the summer. (In the picture at the very top of this post, you may also notice that the overhang is keeping the high summer sun from entering the house.) 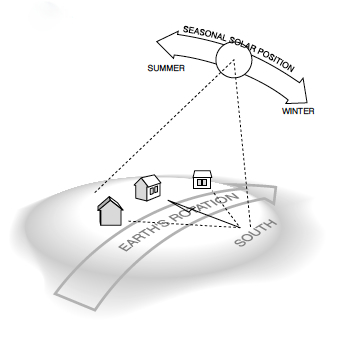 If the building in the middle were longer, stretching toward the two houses located on either side of it, more of its mass would be ideally situated to absorb and radiate heat in the winter

Passive solar buildings are typically rectangular with the long side of the building facing south.  The distance from the source of incoming heat (south) to where it is absorbed (typically a northern wall) should be minimized. The resulting shape is a rectangle.  This is one of the lessons learned in the construction of this Off Grid Passive Solar Earthship-Style Home.

As the degree difference from true south expands, the overall potential solar efficiency of the structure decreases. Put another way, the greater the degree variation from true south, will decrease the amount of the the building’s solar gain. As a result, larger amounts of supplementary energy may be needed to heat the building in the winter. As the building’s glass (glazing) faces more to the southwest, more energy may be needed for summer cooling. 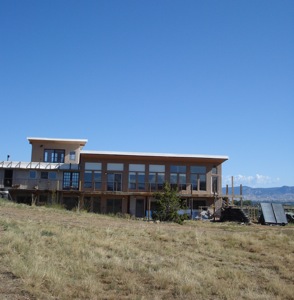 Passive solar buildings typically have many windows facing the south

Southern facing windows (southern solar glazing) are a vital component for a passive solar design and building. Because the southern side of the building is the side that will potentially receive sunlight throughout the day, most passive solar buildings will feature glass dominating the southern side. Southern facing glass allows the sun’s energy to be absorbed and distributed through the building’s thermal mass.

You may hear people referring to glass as glazing. Glazing is the fancy architectural word typically used for southern facing glass that has the capacity to transfer the sun’s energy.

All of these factors can be used to one’s advantage, depending upon the site location and depending on the specific characteristics that you want within the house.

While southern facing windows (glazing) are a necessary component of passive solar design, care must be taken to insulate them in the winter after the sun goes down, as well as shade them in the summer.

Note that because the Earth is a sphere, depending on where you are located, the sun will interact slightly differently than in other places.  For example, the angle of the summer and winter sun will be different.

If, however, you are located in the Southern Hemisphere, in order to build a passive or active solar home, the building will need to be oriented to the north.

Here’s a little more information about solar building in the southern hemisphere.

Most glass that is used in building is vertical.  Angled glass, however, is frequently used in passive solar design because it increases the amount of solar energy that can be absorbed. Caution! This can cause overheating in the summertime.

*This information pertaining to facing windows to the south works for those in the northern hemisphere. Down under, in order to use solar gain, they need to face the windows to the north.